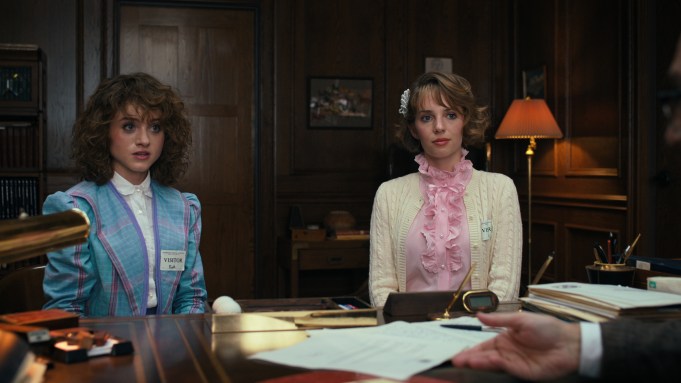 “Stranger Things 4” was arguably one of the biggest TV debuts of the year, garnering 1 billion views in less than a month after its debut and resonating with viewers for its storyline, ’80s nostalgia and beauty looks, which fans are still asking lead makeup artist Amy L. Forsythe about, she said.

“I feel like our characters are so lovable that people latch onto them,” she said about the show’s popularity. “People are like, ‘What lipstick did you use on so and so? What eye shadow?’ There are also people in cosplay and they look for every little detail. Like, ‘How big are Eddie’s tattoos?’ They’re just hungry for information, which is really fun.”

Forsythe, who has worked on the hit Netflix show since its first season, satisfies this hunger through her Instagram account, where she’s been posting in-depth looks at specific beauty moments fans are asking about.

One character that resonated the most is Eddie Munson, played by Joseph Quinn, who joined the cast this season. Forsythe has posted several photos on her Instagram showing detailed images of the character’s tattoos for fans who are looking to recreate the style.

Forsythe thinks the looks resonated so much with fans for their authenticity and range of looks from the mid- to late-1980s.

“I’ve gotten so many calls from colleagues and people that were like, ‘I lived in the ’80s and this was so spot on,’” she said. “They’re like, ‘I wore that makeup and my friend is like that [character].’ I feel like people really resonated with that. And the people that weren’t there back then, I feel like they can still feel that authenticity when they watch it and it just looks so cohesive.”

Forsythe’s approach to the beauty in “Stranger Things 4” is different than the norm. Instead of focusing on the beauty of the main characters, Forsythe focused more on the background characters. This approach was to uphold the authenticity and personality of the show’s established characters, but also set the distinct settings of the fictional Hawkins, Ind., and Lenora, Calif.

“[The beauty] paints a picture of who those people are and where they’re from,” she said. “I think you can really tell the difference between somebody who lives in Hawkins and someone who lives in California. They’re two totally different worlds and I think that’s a really cool thing to remember. Like, just because something is ‘in’ in one area, it might not be ‘in’ in another area. But that’s the show — it’s showing you different types of people from different places, and I think that the beauty really showcases that.”

Forsythe stated one of the scenes that really stood out to her is the rollerskating rink scene from the beginning of the season because she got to play around with ’80s beauty trends, especially for the bully characters.

“The California [scenes] I would say were so much fun because you really got to show that this is ’80s cinema,” Forsythe said. “Like, this is the makeup you see when you go back and look at ’80s movies. The background is a character in our show, so I feel like with the bullies, we specifically added things to them that [replicated] ’80s icons. You have the glitter eye shadow, you have lots of blush, you have the pink lip gloss and all of these things that you can’t necessarily put on one of the lead actors without it being distracting.”

While she stuck with a simpler beauty approach for the main characters, Forsythe said the character she thinks had the most striking beauty moment in “Stranger Things 4” is Robin Buckley, played by Maya Hawke.

Toward the end of the season, the character eschews her tomboy aesthetic for a more girly one to impress a male psychiatric doctor. The character gets a makeover from Nancy Wheeler, played by Natalia Dyer, who Forsythe said replicated makeup on Robin that she’d seen on her mother.

“We’ve never seen [Robin] in a beauty makeup look,” Forsythe said. “When we see her go to [the] Pennhurst [Mental Hospital], we see her out of her element and as Nancy sees her mom doing makeup. It’s a fish out of water sort of thing, but I thought it was really fun.”

Overall, Forsythe said the most fun part of “Stranger Things 4” was the season’s larger scope of characters and how that gave her the opportunity to experiment with her looks.

“It was really fun this season because the world did get a little bit bigger, so you get to introduce a little bit more of the ’80s stereotypical vibe through the characters,” she said. “We have the Dungeons & Dragons [characters], we’ve got the jocks and the bullies in California, so you really get to start touching on all of these things that you really hadn’t been able to showcase before.”