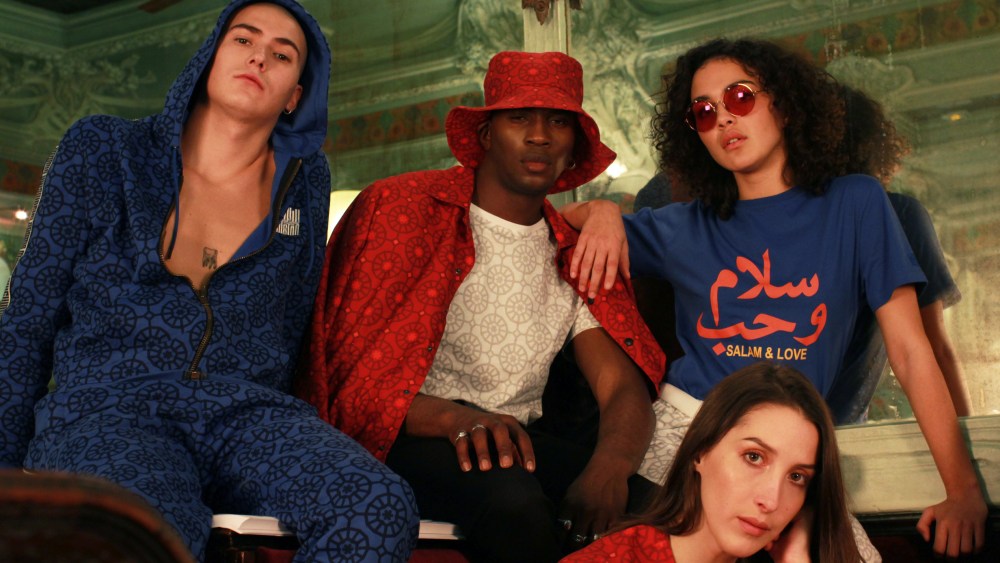 “Oriental is the new black,” as Christian Marie, one of the founders of Paris-based streetwear label Ldn-istan likes to put it. And he is confident of that. So confident in fact that he and the label’s creative director, Hamida Aman, are betting their business on it.

It could turn out to be an excellent wager. In Europe, a multicultural movement — which includes everything from hipster falafel shops to Arab-inspired techno and pop music — is the result of second- and third-generation Europeans rediscovering their Middle Eastern roots, as well as new waves of migrants finding their place on the continent. In the clothing business, signs include the increasing importance of the Middle Eastern market for streetwear — especially hyped and hard-to-find labels — as demonstrated by the success of events like Sole DXB in Dubai and various high-profile collaborations, with brands like Puma, Nike and the NBA teaming with Arab designers.

In its fourth season now, Ldn-istan sells out of a boutique in Paris’ Pigalle neighborhood. Marie and Aman have also been touring various trade shows, including Sole DXB, Who’s Next in Paris, Seek in Berlin and Pure London. On Thursday, they hosted a showcase and party at well-known Parisian night club and bar Badaboum.

“We believe the market is there and once buyers realize this is an emerging trend, we will find them,” Aman told WWD. “It’s a small wave right now but it’s starting to grow.”

“It’s very interesting sociologically,” Marie explained further. “The first and second generations of immigrants who came here often wanted to dress like the French people. But with the third generation I think there is a new phenomenon: They feel confident here now, so they are saying we are proud of our origins and we can dress in a way that expresses where we come from.”

Aman understands this well: She grew up in Switzerland after moving there with her family as a refugee, aged eight. Then she returned to Afghanistan in the early Aughts to rediscover her own roots and the couple met there, in Kabul. Both of them have backgrounds in media and Aman had established what is now one of Afghanistan’s most recognized media production companies, Awaz. When the pair eventually moved again, first to Dubai and then eventually to Paris, they wanted to “build bridges between people.”

“Fashion has always opened doors,” Marie explained as to why they chose T-shirts over journalism. “It is a tool for communication.”

Like many other Middle East-inspired streetwear brands, the label started simply, by printing slogans in Arabic (things like “peace and love”) on T-shirts, bandanas and sweatshirts. But over the past two years their approach has evolved, they have brought on a new design team and the label is beginning to transmit a more subtle cultural signal.

Instead of overt branding, the latest collection includes tracksuits featuring bold graphics inspired by the tiles one might find in a mosque; a slick, contemporary version of a traditional long men’s shirt known as a kameez, and a hooded dress that is a clever, semi-tailored take on the abaya.

All of the Ldn-istan garments are designed in Paris, then made in Portugal in small factories Marie and Aman choose personally to ensure social and environmental standards. Their biggest challenge right now, they said, is to find more retail outlets and a bigger foothold in the competitive streetwear market.

Ldn-istan is stocked in specialist stores in Paris and Geneva, at Galeries Lafayette and Le BHV Marais in Dubai as well the Dubai Mall and will soon be available at LNFA, a concept store in Berlin’s style-centric Bikini mall.

“It’s super contemporary,” Kristian Barella Greve, a buyer at LNFA, explained as to why he decided to bring the line in. Barella Greve said he likes the careful manufacture and the humility of the message. But mostly, the Berlin-based stylist said, “You get the feeling this is something special, especially with current, controversies around questions about immigration and integration in Europe.”