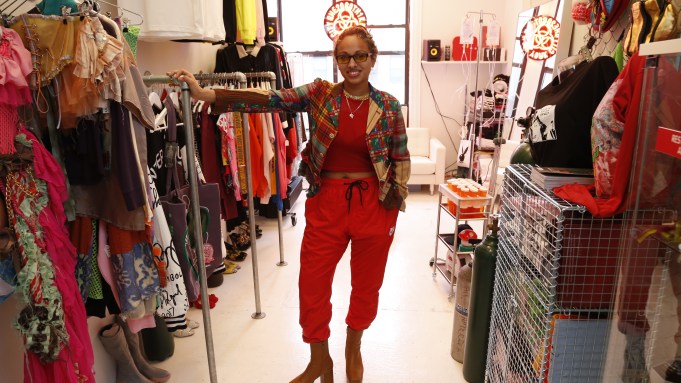 Venus X is expanding her orbit.

The DJ, who founded the GHE20G0TH1K party series in 2009 and brought on with Hood by Air’s Shayne Oliver as a resident in 2010, has opened Planet X, a Chinatown store selling vintage and new products.

She tested out retail last year with a pop-up in the Bushwick section of Brooklyn, that was only supposed to last for a month, but remained open for six months. And shortly after packing up the temporary shop, she moved into a studio on the third floor of a Chinatown building at 99 Canal Street.

“It was so hard,” said the DJ, whose birth name is Jazmin Venus Soto. “But we learned how to do things like hire people, fire people and do inventory. Things are undoubtedly going to get messed up if you don’t have investors or a lot of money, but we all learned together. It was very ‘Teen Mom’ style.”

Soto is used to operating on the periphery and championing the marginalized. She’s created safe spaces for mostly young, LGBTQ people of color with her parties and recently launched a GHE20G0TH1K record label to promote artists that bigger labels don’t typically invest in. She even called out a powerful pop star, Rihanna, for appropriating the GHE20G0TH1K aesthetic and hashtagging #GhettoGoth a couple of years ago without referencing the source. Venus said although the singer has supported Hood by Air, she has yet to atone for her use of GHE20G0TH1K messaging and look.

But as Soto’s profile rises, she’s beginning to circulate within fashion circles as brands tap into her knowledge and her following. That was best represented by her collaboration with Nike. Earlier this year she was paid to design her own Air Max style.

“I basically did a public think-tank for them and now they know what weird Dominican girls from New York want to wear, and so does the rest of the world,” she said. “People used to have this idea of me as this nightlife persona and I was very much on everyone’s mood board. But now I have my own space in Manhattan, which is a big deal.”

She’s upped the ante on the Manhattan store with a new concept and new designers. She looked to the Freak Pharmacy raves she used to throw to set the tone for the space, which is decorated with a temperamental GHE20G0TH1K New York biohazard-style neon light, a wheelchair, oxygen tanks, syringes and medicine bottles.

While her Bushwick store was primarily stocked with vintage pieces she purchased and collected while touring around the world, Soto wanted to bring in more new, hard-to-find brands. She’s picked up Kamikaze, a New York skate brand; Lou Dallas, a women’s line designed by Raffaella Hanley, and Bjarne Melgaard, a Norwegian artist known for creating a fake Supreme collection, which was an imagined collaboration between the streetwear brand and the independent publisher Semiotext(e) named Suprem(e).

“No one sells Lou Dallas yet,” Soto said. “If the brand is widely distributed, what’s the point of carrying it here? A lot of designers view Planet X as a testing ground that doesn’t have the same pressures that are connected with luxury retail experiences.”

New merchandise hangs alongside vintage apparel and accessories from Comme des Garçons, Moschino, Vivienne Westwood, Chanel, Prada and Christian Dior. Venus said this mix is new for many customers, but she believes it will catch on.

“You have to give it a few years if you are trying to redefine how people relate, and I think people aren’t used to seeing new and old clothes in the same space, but that’s how we have it at home, and that’s what’s sustainable,” Soto said.

She’s also interested in making Planet X more than a retail store and wants to hold activations, whether it’s a poetry reading or an album release party with a GHE20G0TH1K artist. A GHE20G0TH1K radio show airs from the store and live DJs come in on a monthly basis.

“Creating content in the space is very important to me and we want to make sure that we aren’t just focused on selling clothes,” she said. “I think the best place to sell our lifestyle, as opposed to a T-shirt with a logo, is in a store where like-minded people can sit down and hang out.”

As far as continuing to work with bigger companies as a means to help grow GHE20G0TH1K into a lifestyle brand, she is open but particular about her brand and its aesthetics.

“I’m down to work with companies because they are very beneficial to the process of our growth, but at the same time it’s not easy. It’s never easy when you have a vision that no one else can really see. But it’s getting easier.”

Virgil Abloh to Take ‘Temperature’ of Our Times at Pitti