Apparel brands and retailers have sought to gain a competitive edge by offering garments with special characteristics. 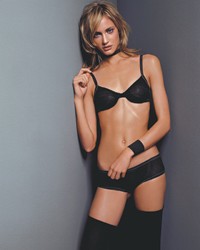 NEW YORK — Apparel brands and retailers have sought to gain a competitive edge by offering garments with special characteristics, improving performance, eliminating the need for ironing or helping colors withstand the rigors of wear and washing.

Meeting these needs has fueled the pace of innovation for the manufacturers of stretch fibers and changed the way they do business.

Bob Kirkwood, technical director for Invista apparel, said developing products that provide brands and retailers with garments that possess not just one, but a range of enhanced performance qualities has been a challenge that has grown in recent years.

“The question is how can you deliver multiple benefits from a single product,” said Kirkwood. “Because price is important, [a brand or retailer] would like a garment that has maybe three unique properties, but they can’t afford to pay for three different processes.”

Satisfying this need has necessitated a change in how the company approaches its business. According to Kirkwood, five years ago the strategy centered on developing two to three products and then looking to sell them “to everything from intimates to ready-to-wear.”

“We basically talked about Lycra, but now we are talking about 10 or 11 different product families within that,” he said.

The company has also gone beyond working with its mill customers, devoting more time and resources to developing relationships with brands and retailers.

“We find that we talk more with customers about what innovations they’re looking for in fabrics and garments,” said Kirkwood. “We may already know how to do that with an existing fiber, but just may not have used it in that way, which makes for a fast turnaround.”

Invista has sought to utilize its base products, such as Lycra spandex and T400, and customize them for various markets. Over the last year, the company has introduced Super White Lycra to the intimate apparel market and Black Lycra for use in intimates and activewear. According to Kirkwood, Super White Lycra makes intimates more durable and prevents yellowing that occurs from normal washing and wearing. Black Lycra provides similar improvements to durability and provides a deeper color.

For Kirkwood, Black Lycra serves as an example of a product that was designed with a specific market in mind, but has crossover appeal to other sectors, such as eveningwear where black fabrics are common. Black Lycra was targeted for solid black fabrics. However, Kirkwood said there has been interest in the fiber being used as a styling yarn to help bring out other elements of a fabric, such as blending with other colors and being used in patterned goods.

This story first appeared in the June 6, 2006 issue of WWD. Subscribe Today.

“Based on our market and consumer research, we target a launch for a certain area,” he said. “Then three to four years after we launch the products, we tend to move into areas we haven’t thought of.”

More recently, Invista has introduced XFit Lycra, a product that gives denim a four-way stretch. The company has targeted XFit specifically for the premium denim market, and has had the good fortune of hitting the market at a time when denim silhouettes have slimmed down considerably and made attaining a perfect fit even more of a necessity.

Stretch fibers have reached a 60 percent penetration rate into the denim market, according to Kirkwood. The company is preparing to introduce three products targeted for the ready-to-wear market, as well.

Valentina Henao, global fabric and trend manager for Dow Fiber Solutions, has a three-person team that works with mills to develop fabrics that incorporate the Dow XLA fiber.

“The retailers and brands, they don’t care what brand or fiber it is, they just care about the hand feel of the fabric,” said Henao. “If it’s nice and comfortable, the designers jump on it.”

Dow’s most recent development has been blending XLA with cashmere, which, according to Henao, allows the cashmere to hold its form after dry cleaning. Henao also points out that the XLA fiber, generically known as lastow, is not a spandex, which allows it to be blended with natural fibers more easily.

“When you mix [XLA] with a cashmere, what you want is a fiber that will improve the performance of the wool but not take away the hand feel,” Henao said.

Dow is focused on increasing its presence in the apparel industry, noted Henao. The company sees more opportunity to blend XLA with luxury fibers going forward, and is already seeing interest in using the fiber in linen, denim and men’s and women’s shirtings.

Dow is also working to shake the traditional image of fiber providers and create a sense of energy about its products. The company hopes to attract more brands and retailers with a new showroom in Manhattan that is scheduled to open in late September. The 3,500-square-foot space will be home to a library of more than 5,000 fabrics and a conference room where trend presentations will be presented each season. There will be no offices in the space, but there will be a bar that Dow hopes will create a more casual atmosphere for meetings.

“New York is a perfect place to connect with better brands and retailers,” said Henao.

At RadiciSpandex, the company has recently introduced S-TS spandex, which sets at a lower temperature than traditional spandex. Low-set temperature spandex prevents natural fibers such as cotton from getting damaged, creating new opportunities, according to Marty Moran, global sales manager of RadiciSpandex.

“We’ve found it has opened other markets to us, like polypropylene, wool and renewable fibers,” said Moran.

The rise of companies such as Under Armor has pushed moisture management to the fore for many customers, and Moran said he’s hearing more requests for information on incorporating antimicrobial properties into garments.

Like Invista, Moran has seen RadiciSpandex work to rapidly expand its product portfolio in recent years.

“It used to be you had one spandex fiber,” said Moran. “The market has demanded you tailor what you produce for them. It may be chlorine-resistance, low-heat set or high-temperature dyeing. The portfolio is definitely expanding.”

Global competition has also forced the pace of innovation. RadiciSpandex has focused its efforts on the Americas and Europe. The effort, said Moran, is centered on helping free trade regions be competitive.

“It’s going to continue to be a challenge, but we believe this hemisphere is up to the challenge,” said Moran. “Things like NAFTA and CAFTA, and the pending Andean free trade agreement will help strengthen that.”

Moran said RadiciSpandex hasn’t had a problem keeping up with the pace of innovation and is confident in its ability to work with multiple fibers. Moran said he’d like the apparel market to move faster to adopt some of those innovations.

Regardless of when the larger apparel market adopts an innovation, it’s clear that customers are demanding more of them.