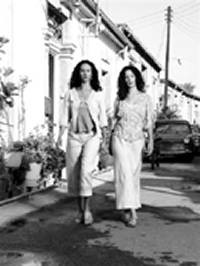 NEW YORK — Three of the 10 trade shows around town lastweek featured spring sportswear and ready-to-wear, but the season they were promoting was the only common thread running through the diverse venues.

Femme, the largest of the apparel and accessories trio, featured more than 1,500 lines and took place Sept. 22 through last Wednesday at the Jacob Javits Convention Center. The show featured seminars and appearances by Carol Alt and entertainment by Ryan Starr, a finalist on “American Idol.”

During the same four-day period downtown, Workshop N.Y. staged its fifth edition at Chelsea Market in an airy, gallery-like setting. The show introduced a new accessories floor and housed 95 vendors over 19,000 square feet — up 30 companies from the show in March.

New to Manhattan, the five-year-old Designers & Agents premíered in an open and sunny loft space at 450 West 31st Street. Spread over 20,000 square feet with aerial views of the city and a penthouse to relax, D&A presented 48 booths showing more than 100 lines during a three-day period ending last Wednesday. The show, which has had successful runs in Los Angeles and Tokyo, is intended to evoke an airy, design-studio atmosphere. About 1,350 retailers walked the show.

Barbara Kramer, who founded D&A along with Ed Mandelbaum, said there needs to be a variety of shows to meet the needs of retailers.

“It’s really a community approach and the idea of creating an environment where everyone plays off each other,” Kramer said. “Like a buyer would merchandise its stores, we try and place companies next to companies that complement each other, while at the same time, don’t duplicate one another.”

Details like fresh flowers, cool music and personalized booths to match the vendor assortment added to the shopping ambiance.

Deborah Baum, general manager of the East Coast group at Advanstar, which produces Femme, said: “All of the shows should be working together to make it an easy trip for the retailers. Trade shows are becoming more important because retailers don’t have the time to visit all of the showrooms, so we need to work together to make sure they can maneuver back and forth between the shows. We all offer different environments and products, but they are all viable.”

Baum noted Femme saw more than 2,000 retailers enter its doors just in the first two hours of business. “It was busy,” Baum said. “We had more than 11,000 attendees.”

Here’s a closer look at each of the shows:

Highlighted by many new international exhibitors, Femme widened the aisles and improved the lighting for a better buying experience.

Flowy dresses in paisley prints and sheer printed blouses were the hot-selling items at Karavan, said Rose Rappaport, sales representative at the 50-year-old moderately priced company based in New York.

Sweaters in bright colors like peach, blue, green and red were the top sellers at Rico, said Corinne Fowler, owner and designer.

“Our customer knows us for our quality in handknits, so we have a lot of repeat business,” she said.

But buyer Stacy Lombardo, with the Airbrush Shop in Yorktown Heights, N.Y., said, “There is so much cool stuff here, lots of cottons and sportswear, which is what I’m looking for. Still, it’s my first year here, so I’m being conservative. I probably will spend $10,000.”

Store owner Michele Ward of Taken For Granite in Stony Creek, Conn., said she liked the mix of lines exhibiting.

“The show seems better organized,” Ward said. “So it makes buying easier, and I hope to get all my shopping done for spring and some immediate.”

Retailers searched for new resources for spring and immediate merchandise among the bridge sportswear and rtw collections. Store owner Cindy Pemberton of Flair, in Hapoisett, Mass. lauded the show’s offerings, saying it featured lots of “items that jump out at you.”

“For spring, they’re really bringing back the Jackie O, whimsical and girlie look,” said Pemberton, who placed orders at Erica Tanov and Andrew Paluba. “This show seems special and inspirational, and it seems like the companies are happy to be here with each other.”

While the traffic last Wednesday — the final day of Workshop — had lessened, it actually made shopping the various areas, designated under names like “Place des Vosges” and “Place de la Madeleine” easier, retailers said.

Buyer Yosuke Otsubo traveled all the way from Japan to shop at the D&A show, saying he hoped to do all of his spring buying there.

“For new lines, this is the show,” said Otsubo, noting that Japanese women want to wear American and European fashions. “The economy is still struggling in Japan, but everyone wants new merchandise.”

“We had all the right buyers like Fred Segal and Flair in Santa Monica,” Greenspan said. “I found them to be very interested in T-shirt lines, new clothing lines and accessories, and they were looking for something different. What was interesting is that I didn’t find the buyers to be that conservative and our novelty cotton prints were one of the strongest sellers.”

Greenspan said the average order was between $2,500 to $5,000. The line wholesales for $31 for a Shopaholic T-shirt to $98 for a cotton Adrienne Buissereth printed dress. In total, she picked up 25 new accounts, opening up a lot of Japanese and Canadian clients.

D&A featured an eclectic mix of designers, from Patch NYC and Mimi Turner to Calypso by Christiane Celle.

Summing up many vendors’ sentiments about the show, designer Ani Kiramichyan of the line Kaj Ani, said D&A allows newer designers to get the exposure they need to top retail buyers.

“It’s a great space,” she said. “And from the indication of this show, it seems business is picking up and people are taking more chances.”