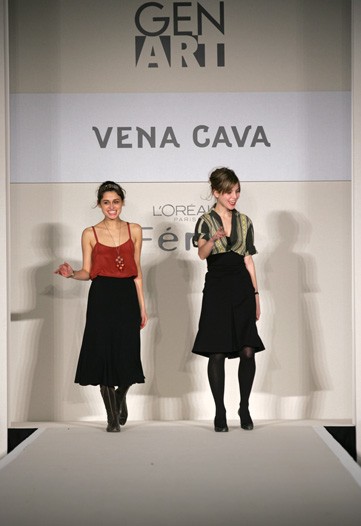 In this industry, partying for a cause is a matter of course, even if the good intentions of the event are often overshadowed by its fabulous atmosphere, full of famous faces, party frocks and free drinks. All of that will be part of tomorrow night’s I Heart Gen Art: 15th Anniversary Benefit, but make no mistake — as much as it will be a festive ode to art, fashion and film, it’s also a cry for help. As Ian Gerard, Gen Art’s cofounder, put it, “The underpinning of the benefit is to reach out to the talent we’ve worked with over the years and say, ‘We’re in a bad spot. Can you come out and support?’”

Gen Art has been as ravaged by the economic downturn as the emerging designers it seeks to support. “Our main source of revenue [has been] corporate marketing dollars,” said Gerard, who founded Gen Art with his brother Stefan in 1993. “That seemed solid, like something you’d never have to worry about, but everyone was caught off guard by how quickly things froze up. Unfortunately, we weren’t as diversified as we could have been. Three of our largest sponsors were in the financial and auto sectors.”

Since December, Gen Art has laid off a third of its staff and turned three of its five regional offices into virtual operations. In an effort to further cut costs, half of the remaining staff will be furloughed for the slow months of July and August. Gerard hopes marketing budgets will bounce back before September and New York Fashion Week, during which Gen Art hosts its signature Fresh Faces in Fashion show, a group runway presentation that spotlights new designers. The organization boasts an impressive roster of alumni — Zac Posen, Rebecca Taylor, Vena Cava, Geren Ford, Peter Som and Rodarte among them. Tomorrow night’s benefit — the first that Gen Art has held in more than a decade — has been planned as a life line to raise $250,000 via ticket sales and donations. And Gerard isn’t shy about the fact that Gen Art, which also has art, film and music programs, needs to raise an additional $500,000 in investment capital, or else.

As of now, Gen Art’s 10-year-old international design competition, Gen Art Styles, which is typically held at the Hammerstein Ballroom and involves a cash prize, is on hold. A pool of 1,000 applicants has already been whittled down to 25 finalists, but “we don’t have the resources to produce the event,” said Gerard, who hopes to raise the money by the fall. “It’s not only the event; it’s the award money. It’s expensive.”

The fact that Gen Art is facing the same worst-case scenario as the new designers it advocates does not bode well for fashion’s up-and-comers, for whom a free runway production is invaluable. Vena Cava’s Lisa Mayock and Sophie Buhai consider the show they did with Gen Art in 2005, their third season, pivotal. “At that point, we really had no stores. We had started our business with no money, had no investors,” said Buhai. “When you’re so small like that, showrooms won’t even meet with you. But if you’ve done Gen Art, it just opens so many doors.”

In addition to staging the entire runway production, Gen Art attracts an audience that young designers wouldn’t otherwise have access to, such as Saks Fifth Avenue. For more than seven years, Saks’ fashion market director Colleen Sherin has served on Gen Art’s Fresh Faces selection panel, where she and her fellow panelists sift through thousands of applications. “[Gen Art’s] support is so important, because it exposes these designers to the media, the editors, the stylists, the buyers, the retailers,” said Sherin, adding that Saks’ fashion and buying teams always attend the show.

Consider Zac Posen, who came blazing out of Gen Art’s Fresh Faces show in 2001 on the heels of his graduation from Central Saint Martins. By the following season, he had staged his own show, received reams of editorial press as well as a CFDA award nomination. When asked how Gen Art affected his career path, Posen replied, “[Before Gen Art], I had done one small presentation in my parents’ living room. And I probably would have done another one.”