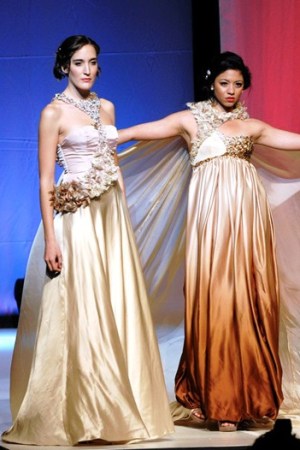 Twenty students from Philadelphia University got a little taste of “Project Runway” on May 8 as participants in the school’s annual fashion show: They were handpicked by judges, including the first winner of the reality fashion show, Jay McCarroll.

“I love to see the whole development through — from beginning to end,” said McCarroll. “In this industry, everything has been done — every skirt, from your crotch to your head. Here, this is what’s new.”

And by new, McCarroll pointed to intricate details such as manipulated leather accents woven into more than 200 looks that earned Meg Dewey the Neiman Marcus Most Saleable Collection award. Jewel-encrusted gowns flowed down the runway with Rachel Wendling’s floor-length creations earning her the Frank Agostino Best Eveningwear prize. Amanda Vereb showcased her range in both sportswear and men’s wear, winning the Joseph Klein Award for Excellence in Menswear Design and the Fashion Faculty Award for Excellence in Design and Execution.

During the festivities, dubbed “An Evening of Innovation” — at the Academy of Music in Philadelphia — the school honored 10 “Leaders of Innovation,” entrepreneurs including Allen E. Sirkin, president and chief operating officer of Phillips-Van Heusen Corp., who was granted an honorary doctorate; Robert Cordaro, chief operating officer of John Varvatos Enterprises; Andrew J. Vecchione, president of Polartec LLC, and Alvin P. Gutman, former chairman of Pressman-Gutman, each receiving Lifetime Innovation Awards.