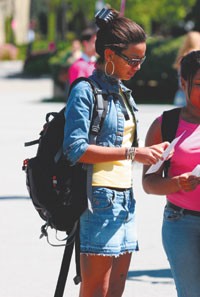 Extreme Makeover
On the collegiate battleground, fashion is fickle. Whether it’s the label-obsessed woman discovering thrift store finds, or the below-the-knee dresser falling in love with the miniskirt, on-campus personal style is always evolving.

Take, for example, Eileen Conlan, a senior at Fordham University. She says that, at her Pennington, N.J., high school, status symbols were “Birkenstocks and North Face jackets,” and her accessory of choice was a Nalgene water bottle. Since moving to New York, she has added “flair” to her wardrobe by replacing fuzzy fleeces with sparkly cardigans and trading in her hiking boots for metallic flats.

Similar is the tale of University of Southern California senior Wendy Sung. “I moved to L.A. and totally got sucked into the materialistic mecca,” says the San Diego native. “I only wanted Theory or Marc Jacobs.” Desperate to break away from “boring, unoriginal, safe outfits,” Sung began personalizing her wardrobe by layering pieces of her handmade jewelry to accessorize her look. “I’m always on the lookout for vintage stuff that can be re-doctored,” she adds, noting that now her style can be found at the intersection of “hip-hop elements and indie-rock fashion.”

Sometimes, a change in style can be as dramatic as a religious awakening. Mira Abramsohn, a senior at Brandeis University, admits that light jeans and sneakers were her idea of fashion when she attended an orthodox Jewish high school in Paramus, N.J. “I didn’t know how to handle the strict dress code that commanded over-the-elbow sleeves,” Abramsohn says with a laugh. “I didn’t realize people can actually control what they look like.” Nowadays, Abramsohn marches to class in her favorite fuchsia stilettos.

Meanwhile, Frances Cowhig’s freshman year at Brown University can be summed up by two items of clothing: pajama pants and puffy vests. Admitting that she took her school’s liberal “wear whatever you want” environment a little too seriously, Cowhig, now a senior, says her involvement in a student-led female sexuality workshop jump-started her creativity. Today, she searches for eclectic second-hand finds, wears Frye boots that she scored on e-Bay for $90 and won’t leave home without a deep purple velvet blazer, topped off with her grandmother’s brooch.
— Mandy Tang

Women’s Studies
In the single-sex enclaves of the American higher education system, sweats are big. But not as big as their coeducational counterparts may assume. In fact, women at these colleges are united by more than a love of the liberal arts; they often possess some of the most uninhibited and clever interpretations of fashion around.

“Single-sex environments tend to make one’s status as a female less salient in day-to-day interactions,” says Julie Norem, professor of social psychology at Wellesley College. “For women who like to play with self-presentation via fashion, a single-sex environment may be a relatively safe place to do that, and they might become more extravagant, extreme or variable in their fashion choices.”

Meanwhile, Bryn Mawr junior Demet Sahin makes high-profile use of her hefty clothing allowance from her parents. She refuses to let comfort or even freezing temperatures thwart her love for Christian Lacroix miniskirts or Carolina Herrera shift dresses. Granted, her peers may deem her “overdressed” for class, but Sahin remains sanguine. “It’s out of respect that one has for herself and for others that she not be in public in pajamas,” says Sahin, an economics major. “Everyone knows who I am with my 5-inch Italian stilettos, 5-inch skirt and 2005 Ferré sunglasses.”

Yuri Cartier, a senior at Wellesley, is also quick to identify her sense of fashion. She heads to the quad in jeans and shrunken jackets, accessorized with a “Yuri” necklace forged from soldering wire that a friend found at a construction site.

Cartier describes her style as “compact,” meaning she prefers form-fitting attire to the pajamas espoused by some of her less-ambitious classmates. “It’s sometimes flashy, occasionally sexy, inspired by a Bowie-esque androgyny accessorized in Japan,” says Cartier, who serves as the music director for campus radio station WZLZ. “Fashion and music have always been married, so as my musical tastes changed, so did my taste in fashion.”

Elizabeth Whiston, editor in chief of the Sophian, Smith College’s weekly newspaper, believes that at her school, a great deal of style is driven by politics. “This fall, the Smith Democrats sold tons of Marc Jacobs’ ‘Hillary’ T-shirts,” she says. “That typifies Smith style — comfortable, stylish and political all at the same time.”

But what if these women attended class with men? Vassar professor of English Beth Darlington, who began her tenure at the school before it went coed in 1969, says it wouldn’t make a difference. “Our students wore fatigues to classes before coeducation, and their dress reflected the styles current then on other campuses,” she remembers. “I don’t think that coeducation significantly affected the way that Vassar women dressed.”

Bryn Mawr freshman Adaobi Kanu agrees that little would change if her school went coed. “I would dress the same,” she says. “My wardrobe hasn’t changed in a while.” Hicks concurs — with one exception. “In a coed environment I might have better underwear.”
— Ashley Baker

Rushin’ Dressing
Missouri in August can be unbearably hot. Still, that’s no excuse for a

T-shirt knotted at the belly button. But that’s just what Laci Wollard witnessed when she manned the front door of the Pi Beta Phi house during rush last year at the University of Missouri in Columbia.

“On the first day, we see over 2,000 girls,” says the junior from Kansas City, Mo. “You really notice the cute accessories and cute bags.” However, she notes judiciously, “it’s best that body parts don’t hang out.”

Fashion is supposed to play no role in a sorority’s selection process during recruitment week. The University of Missouri’s panhellenic association, like many others, requires potential members to follow a strict dress code — often made up of matching T-shirts — during that time so they are seen on a level playing field. (The word “rushee” is no longer politically correct. The new term, as dictated by the National Panhellenic Council, is “potential member,” or PM.)

“Sorority life is very competitive,” says Barbara Kelsey, a sophomore and Alpha Omicron Pi at Indiana University, where PMs are required to wear the same T-shirt on the first and third days of rush, and a black dress on the second day. “We want the girls to have the best shot.”

Try as they might to remove fashion from the recruitment equation, plenty of houses still see clothes as a factor that can make or break a girl’s chance of acceptance into a sorority. “The recruitment process consists of a series of maybe five-minute meetings,” says Alexandra Robbins, author of “Pledged: The Secret Life of Sororities,” who spent a year undercover in several sorority houses while researching her book. “So in that cattle-market atmosphere, it’s tough to get to know a girl based on more than her looks. Sometimes, all a sister knows about a rushee is her appearance.”

In some places, however, it’s still OK to judge a book by its cover. At the University of Wisconsin, PMs are allowed to wear whatever they choose during rush. Caroline Poduch, a freshman and newly minted Kappa Alpha Theta at the Madison campus, shopped for her rush outfits at Gap, Forever 21, Express and Nordstrom. On one day, she wore a Gap halter top, ruffled jean skirt and espadrille wedges, and carried a little black Coach bag decorated with interlocking Cs. “All the houses notice what you’re wearing, and it’s definitely part of the selection process,” says Poduch, a Chicago native. “At one house, a girl said she liked my dress and asked me where I got it, and at another house, someone asked me where I like to shop.”

Not that there’s anything wrong with that. Fashion has long served as a commonality for women, defining who they are and what they think of themselves and others. Within a sorority house, as elsewhere, a comment about a handbag or a pair of shoes can simply spark a conversation. “It’s easy to go up to a girl and say, ‘I like your bag; where’d you get it?’” says Brie Winn, a sophomore Sigma Delta Tau at the University of Michigan in Ann Arbor. When she rushed in 2003, Winn went for a “trendy but classy” look by wearing Seven jeans, a Lacoste polo and Rainbow flip-flops on the first day, and a pink off-the-shoulder Betsey Johnson dress for Bid Day, the last round of rush when PMs are offered “bids” by sororities.

But the PMs aren’t the only ones making fashion impressions during rush. Sorority sisters are subject to equal scrutiny. Gina Maryasis, a freshman Delta Gamma at Florida State University in Tallahassee, remembers exactly what her future DG sisters wore during rush: designer jeans, black tank tops, stilettos. “Our house is definitely a little more sassy than the other houses,” says Maryasis. “I guess we try to portray a ‘Sex and the City’ vibe. We’re very trendy and into fashion.”

Erica Greene, a fellow Florida State DG and vice president of recruitment at the sorority, seconds that emotion. “Everyone in our house dresses however they want,” says the junior, who acknowledges that certain looks do prevail. “But when there are 150 girls with similar likes and styles, we tend to dress the same.” Greene says that this spring her sorority house is all about wedges and sundresses — and Louis Vuitton bags.

Further south, at the University of Miami, about 25 percent of the campus “goes Greek,” as sorority and fraternity members put it. Clare McPartland, a senior and a Kappa Kappa Gamma, explains that fashion talk is a good icebreaker during recruitment, but what a PM says — or wears — should not play a role in the final selection process. “Some of the girls are on student loans and some just got a Mercedes before they went away to college,” McPartland says. “Yes, you want people to take care of their appearance. It’s like a job interview or going on a first date — clothes can show you how much someone is into something.”