Deep in England's Cotswolds, visitors to the grand Sudeley Castle can look forward to a side order of modern art with their afternoon tea this summer. 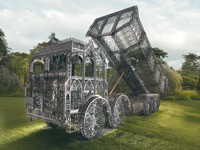 LONDON — Deep in England’s Cotswolds, visitors to the grand Sudeley Castle can look forward to a side order of modern art with their afternoon tea this summer.

The castle is the ancestral home of Mollie Dent-Brocklehurst, a director of the London branch of the Gagosian Gallery, who has placed sculptures by the likes of Cy Twombly, Conrad Shawcross and Wim Delvoye against the estate’s lush lawns and its partially-ruined medieval buildings as part of the exhibition “Restoration #1.”

“I’ve always been interested in commissioning art for outdoor spaces,” said Dent-Brocklehurst, “and this lets me bring the two things I do together. Sudeley has always been a visitor attraction, but this is taking it in a different direction.”

She worked with curator Elliot Macdonald to commission the 12 artists in the show to create pieces that are in some way inspired by the castle and its grounds. Polly Morgan’s stuffed bird is suspended in flight through a broken window in the castle’s kennels, Carsten Holler’s giant silver carousel overlooks the manicured lawns and Paul Fryer’s “Perpetual Study in Defeat” — an electronically created star in a bell jar — is ensconced in the chapel of the estate’s church, where Henry VIII’s sixth and last wife, Katherine Parr, lies buried.

“The idea is for the artists to claim from the castle’s history, but that doesn’t mean it’s always easy,” said Macdonald. “It’s stimulating and challenging to the artists in equal measure.”

While Shawcross’ “Chart,” made of hundreds of oak tetrahedrons that seem randomly thrown together, takes its inspiration from the ancient trees it lies amidst, Keith Coventry has cheekily played on the idea of a country estate — his “Vandalized Benches,” in bronze, are inspired by England’s gritty housing projects, known as council estates.

Macdonald concedes the works might come as a surprise to Sudeley’s more traditional visitors.

“Some visitors do come out of works like Polly Morgan’s taxidermy and find it quite difficult, but then works like Delvoye’s steel ‘Dump Truck’ are easier for them to relate to,” he said. “Having a diverse exhibition is what keeps us excited.”

And Dent-Brocklehurst said the exhibition, which runs through October, is attracting a new audience to Sudeley: Younger Londoners are willing to make the three-hour trip to see these works.

“It is bringing a younger crowd, but we’ve tried to make sure that it doesn’t infringe on those coming to see the castle,” she said, adding she plans to make the exhibition an annual event. “It’s such a beautiful place, I think it’s set a precedent for this kind of exhibition.”