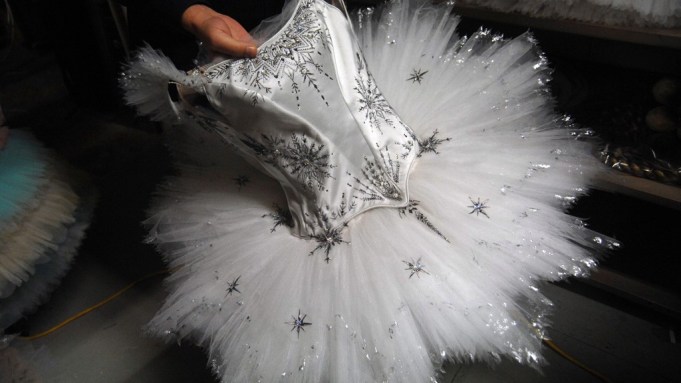 BOSTON — The costumes are lighter and leaner to showcase new choreography, Herr Drosselmeyer has been sexied up with a silk corduroy tailcoat and shag ’do and there is a fresco of the Sun King in Act II’s Palace of Sweets.

Thanks to skillful work by designer Robert Perdziola, the Boston Ballet’s new $3 million version of “Mikko Nissinen’s The Nutcracker” has brought a fresh delicacy and sophistication to the Christmas classic while preserving every ounce of the tradition.

Perdziola’s new sets and costumes, which will make their debut Friday, demonstrate a masterful use of lush detail and a keen understanding of the drama that can be conveyed by an ascot tied a certain way. In fact Perdziola, whose credits span from The Metropolitan Opera to Hollywood, knows his way around an ascot: “Interview with a Vampire” and “The Age of Innocence” are two of his big-screen credits.

“We needed to serve the goddess of dance in a new way,” says Nissinen, describing his goal of eliminating the sugary fizz of the previous production, which premiered in 1995. He asked Perdziola for a more controlled, urbane color palette and sleeker costumes to better reveal the dancers’ bodies, but insisted the final result remain recognizable to the ballet’s considerable fan base.

“When I look at all the ‘Nutcrackers’ that are taking place today, so many productions are about ‘new on new on new’ — almost at the expense of what ‘The Nutcracker’ is about,” Nissinen reflects. “We’ve tried to get back to the heart and roots of why it has survived all these years. I don’t look at this as a revolutionary version, but more like a very well-detailed and researched version.”

Besides, who can afford to mess with success? Boston Ballet’s “The Nutcracker” is a local institution — the company is critically acclaimed, but only this Christmas tradition turns a profit. The show sells about $7 million in tickets, out of which it nets about $1 million in profits toward its $32 million operating budget, says Nissinen. The company will perform 43 shows this year, wrapping on Dec 30.

Even though some dancers brace themselves when they hear the familiar strains of Tchaikovsky running in advertisements, “The Nutcracker” is the bedrock of the season — it introduces families to ballet and forges relationships with local ballet schools which send little dancers to make cameos as partygoers, pageboys and sweets. (By the end of the season, some 250 children will have chasséd across the stage.) “‘The Nutcracker,’” says Nissinen, “is “like a gateway to the art form.”

But the company’s workhorse production has spent 17 years in the same wardrobe. By any measure, the show has earned its makeover. The old satin bodices of the Sugar Plum Fairy and Snow Queen have darkened where cavaliers’ rosined hands have gripped. The yellowy greens and peachy-orange of the Flowers look wilted, dated.

Perdziola has freshened everything up, eliminating any cloying, creamsicle brightness. Samples were danced in and anything that looked floppy or heavy to Nissinen or Perdziola was pared away. The new corps flower costume, for example, is literally half the weight of its predecessor. Where the old costume was lace with literal “petal” overskirts that used to flap on leaps, the new flower is a second-skin blush-striped leotard top pared with an asymmetric skirt alive with cloudlike swirls of pink. The limber new costume is a perfect foil to Nissinen’s new “Waltz of the Flowers” choreography which features failles (a leg-raised leap) and full-turn passés that makes these airy skirts swirl.

Wide hoop skirts have been tossed from the Act I party scene in favor of lean-lined empire-waist gowns that follow leg action better. The snow scene at the end of Act I has gone from a blocky pine forest to a grove of slender, twisting Art Nouveau birches daubed with snowy, silvery paint.

Perdziola replaced the child angels with pages dressed in lavish scarlet coats with billowing ivory sleeves — an homage, he says, to the extravagantly dressed child attendants in Charles and Diana’s wedding.
Yet he preserved one beloved element from the old production: the bear, whose coat is a masterpiece crafted from hundreds of layers of ruched tulle, which gives a furry ripple as he cavorts on stage. But, in keeping with the new production’s more sophisticated flavor, Perdziola gave the bear a new head that’s a good deal more bestial and less Teddy.

One costume remains as bulky as ever — Mother Ginger, who gets new panache from a skirt painted with famous Opera halls and a humongous wig pinned with a Viking ship fascinator, complete with pearl-tipped oars. “It still weighs about 50 pounds,” says Bradley Schlagheck, who receives extra “hazard pay” for dancing Ginger on three-foot stilts and with eight children underneath (the real hazard comes, he says, when the little darlings get bored under the skirt and dare each other to poke his leg.)

But the rest of Perdziola’s designs are receiving praise for being more curvaceous and figure-flattering. Tutu bodices are shapely, with sweetheart necklines that suggest breasts.

“The old costumes were so stretched out,” says principal Lia Cirio who will dance Sugar Plum Fairy and a number of soloist roles during this year’s 43-show run. “You put them on praying they’d fit. Having new costumes is giving everyone new energy.”

Act I, the “reality” portion of the story line where Clara attends a party at her uncle’s house and is given the Nutcracker doll, sticks to a palette of browns, creams and gold. Amid that warm brown domesticity, Clara, the only character to wear blue, looks otherworldly, girl-as-icicle. Fitting because at the end of Act I, the beginning of her dream sequence, she watches snowflakes twirl around an icy King and Queen, the latter who wears a tutu cut jaggedly like a snowflake with silver gilt hand-flecked onto the edges.  When the queen goes into arabesque penché, the audience will see that the tutu’s underside is detailed with silver seven-pointed stars and twinkling crystals.

“I’ve never seen anyone who has taken such care, detail and effort,” Nissinen reflects. “I hope this production sets a new standard.”

The labor investment has been considerable. For months, there were a half-dozen extra staff working in Boston Ballet’s wardrobe department. Needles whirled through tulle — each tutu required 11 to 13 layers. Perdziola overlapped multiple shades (pale blue, rose, lavender, gray, white) of it to make “white” tutus luminous on stage. Several artisans spent weeks just picking up Swarvoski Elements one-by-one with tweezers and heat-setting them to bodices and skirts. No item was considered stage-ready until the gems were scraped vigorously by hand to see if any would pop off. A crystal skittering onto the stage or caught into a pointe shoe? Disastrous.

Dew Drop alone has roughly 4,000 jewels on her tutu and bodice. “Its unheard of,” says Cirio, who will dance Dew Drop on opening night. “Under the lights, it’s going to be insane.”

While Perdziola kept the tone deliberately restrained in Act I, “once we go into the dream, the color emerges,” he says. He pulls out all the stops for Act II, the Palace of Sweets. No mere “Candyland,” this is an opulent Sistine Chapel with a fresco of Louis XIV seated on a throne amid celestial ballerinas. Perdziola hired a fresco expert just to paint this part of the set.

Sugar Plum pirouettes into the fantastic scene in azalea pink; the paisley fleur-de-lis appliquéd onto her tutu are visual sugarplums. Like any savvy celeb working her moment, Sugar Plum changes into a second costume before the pas de deux. This one is cream silk satin with pearls, garnets and delicate cinnabar embroidery, the pattern for which Perdziola drew by hand.

He’s happy to spill every detail of Sugar Plum’s wardrobe, but won’t divulge everything. For instance, there’s the mystery of what happens when Herr Drosselmeyer enchants the Christmas tree, an anticipated moment in Act I. Will it still lurch awkwardly upwards as it grows, as in the old production?

The query draws a smile. “It was so obviously artificial. It looked like a beanstalk,” Perdziola says. (It did.) There will be a new special effect, he promises. But some magic must wait until opening night.