Margot Robbie and Cara Delevingne later hit the town with Delevingne's dog Leo, who is no stranger to the spotlight. 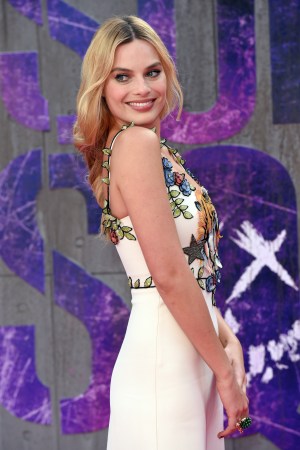 Margot Robbie wore a floral-embroidered cream gown, while her costar Jared Leto made a bolder choice, paying tribute to his character as The Joker in a bright green Gucci coat, blush pink trousers and a pair of classic loafers.

Leto has established a close relationship with the Italian house since his friend Alessandro Michele’s appointment as creative director. He appeared in the latest Gucci fragrance campaign shot in Venice and has made frequent appearances on the brand’s Snapchat account.

The model-turned-actress’ sister, Poppy Delevingne, and her childhood friend Georgia May Jagger also attended the event. Delevingne wore a bright kimono over a black jumpsuit by Roland Mouret, while Jagger sported new bright red hair color and a minidress by Versus Versace.

Speaking to WWD earlier this month, Fukuhara explained that her expertise in karate and martial arts helped her secure her role in the superhero blockbuster-to-be.

“Karate focuses on precision and the attention between every move, so I know who I am fighting, who’s behind me, who’s next to me, and what I need to do to avoid a situation and go in for the kill,” she said.

Although she’s been keeping quiet about her future projects, Fukuhara said the movie has opened a lot of doors. “Having ‘Suicide Squad’ on my résumé has improved the quality of auditions. Now I get the script beforehand.”

Earlier this week, the crew was in New York to celebrate the film’s global premiere.

After the London premiere, Robbie and Delevingne changed into matching navy tracksuits and hit the town with Delevingne’s dog Leo, who is no stranger to the spotlight. He attended the Chanel Couture fall show and sat in the front row with his model owner.