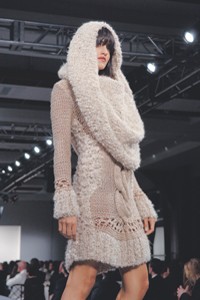 Now that graduation day has come and gone, student designers are preparing to enter the real world of fashion. Here’s how a few plan to do it, as well as a look at some of their debut collections, which ranged from commercial to avant-garde.

Brandon Suen and Bijan Kazem are like any other designers trying to make it in the business. The duo recently shot their first look book for their fledgling line, Suen Kazem. They’ve dutifully lugged around garment bags filled with their merch — python trenches, intarsia sweaters and fluffy cashmere, silk and chinchilla-blend knits — to big-name retailers, p.r. companies and magazines. On one particular day in early May, however, Kazem was carrying a very different kind of garment: a folded mass of red fabric, tucked into a sealed plastic bag. He had just picked up his cap and gown.

Yes, for all their high ambition and business savvy, these boys graduated a mere few days ago. The 24-piece collection they’re shopping around is actually their Parsons The New School for Design joint senior thesis, which just won them the coveted Designer of the Year award at the institution’s 58th Annual Benefit and Fashion Show.

The Suen Kazem designers are certainly a rare breed (they’re already planning accessories to accompany their ready-to-wear line that has yet to be picked up), but they’re not the only ones who have made, or hope to make, a quick leap from campus denizen to professional designer of a line.

For starters, there are Jack McCollough and Lazaro Hernandez of Proenza Schouler, who were the first Parsons graduates to have their thesis line snapped up by a retailer — in this case, Barneys New York. “I said to myself [at the time], if this happens once every 10 years, I’ll be pleased,'” recalls Parsons chairman Tim Gunn, “but there’s been somebody in every class since then, at least.” Cases in point: Matthew Earnest, who followed suit a year later in 2003 with Henri Bendel, and Ashleigh Verrier, who partnered with Saks Fifth Avenue the year after that.

“[The Proenza precedent] went down in history as so important,” Suen says. “That story laid the groundwork for the dreams of all Parsons students to come.” Indeed, the few success stories have raised the bar — but at what cost?

“How many people are really so brilliant that they can be at the tippy-top of the heap?” asks CFDA president Stan Herman. “Very few.” And just listen to Gunn’s warning: “It’s one thing to launch [a line] and it’s another to sustain it…. And you know how unforgiving the industry is now. If you crash and burn, it’s very difficult, if not impossible, in this day and age to rebound.”

Still, that doesn’t stop these new designers from trying. Blame it on the “American Idol”-mentality of society today — or as Sass Brown, assistant professor at FIT, puts it, “the superstarring of fashion designers” — but many graduates leave school intending to build their own labels sooner rather than later. “There’s a kind of a sense of entitlement with young people today. They want instant gratification, it’s all about that instant start-up,” says Barbara Atkin, fashion director of Holt Renfrew.

Times have changed, though. Just take it from Stephanie Wasyl, the winner of this year’s Maria Cornejo critic award at FIT, who recalls her freshman expectations of coming to New York and becoming a fashion designer. “We all thought it was going to be glamorous, that we were going to be huge,” she says. “But then we started interning and we were like, ‘Uh-oh.'”

Likewise, Elizabeth Rho, Parsons Gold Thimble winner, notes that “a couple years ago, I really wanted to start my own line, but at this point, I think I would be better off working for a company or designer. Maybe a little bit later, I could go from there and start my own line.”

That waiting is just what many in the industry advise. “No one can ever really underestimate the value of working under somebody and learning the industry from the ground up,” remarks Parsons alum Peter Som. Meanwhile, Rosemary Brantley, chairman of the fashion-design program at Otis College of Art and Design, points out that these graduates “are in their formative years. What they need is a lot of different experiences, to learn from a lot of different people and to have room to stretch.”

Elizabeth Pearce, an attorney who specializes in the fashion and luxury-goods industries, explains that there are also practical concerns to biding one’s time. “The challenges so vastly outweigh the amount of experience, financing, connections that anybody is likely to have coming out of school,” says Pearce, who has negotiated contracts for clients who include Alexander McQueen and Nicolas Ghesquière. “Great design talent is a long way from the business acumen needed to understand the industry, what people want to buy, at what price point, who the customer is.”

To be sure, it takes more than just a flair for pretty frocks to have a successful company. After all, at the end of the day, the product has to sell. “Nobody wants to be a designer in a vacuum,” says FIT’s Brown. “A designer requires an audience, a buying public, so unless you have market ability, sales ability and business ability, you’re not going to have that. The business side is integral.”

Parsons 2004 Designer of the Year Verrier adds, “There’s always a fine balance of figuring out a way to make something that’s beautiful, aesthetically, but also imagining the function of it.”

Which brings us back to the recent spate of fashion school shows. For every avant-garde design sent down the runway, there was also a salable, retail-friendly counterpart. For every Tim Gunn, who notes that at Parsons, “we proudly look at fashion design through a lens of commerce,” there’s a Peter Barna, provost of Pratt, who admits that “we’re less connected to the industry and more connected to the art end of things.

“These shows have become increasingly important to platform the designs and get the student names out,” says Colleen Sherin, fashion market director of Saks Fifth Avenue. And retailers are getting in on the game. In 2004, Saks bought about 30 designs from Verrier’s thesis collection and featured a hand-crocheted dress by her classmate Tze Goh in its holiday catalogue. For a week after the shows, the store displays work from the Parsons senior class in its New York flagship windows. And recently, FIT paired up with Macy’s East in a move engineered by show sponsor Cosmogirl magazine, to produce one graduate’s collection. The winner will be announced in the fall.

“The fashion community is embracing emerging talent now more than ever,” says Neiman Marcus senior vice president and fashion director Ken Downing. “Young talent is the future of the industry.”

That said, the challenges facing these budding designers are many, and the industry pressure itself only adds more. “We are the drivers accelerating the car. I think we all need to slow down a bit and allow these kids more time to evolve as designers,” admits Julie Gilhart, fashion director of Barneys New York.

What it all boils down to is the fact that there’s no easy course for student designers entering the “real” fashion world. “Trying to follow the path of another designer is impossible and not creative,” says Gilhart. “The truly talented will choose the path that suits them best.”