MILAN — Trends à la Milanese this season included both the steamy stuff and the tailoring the city’s designers do best, as well as a nod to Mod, lots of leather and many, many miniskirts.

At Bally this season, Melissa... 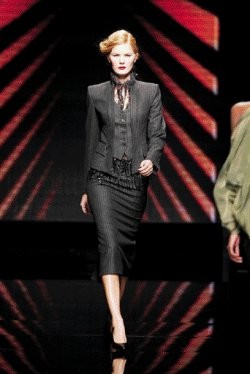 MILAN — Trends à la Milanese this season included both the steamy stuff and the tailoring the city’s designers do best, as well as a nod to Mod, lots of leather and many, many miniskirts.

At Bally this season, Melissa Maish worked leather with an attitude that was by turns Mod and motocross, but always neat. The results included a brown waxy leather jacket trimmed with white and sassy pleated leather miniskirts.

Stephen Fairchild joined the gang, showing his intriguing sporty looks on mannequins this time around. He deconstructed the classic sailor striped sweater and turned it sexy with a little lacing, but also showed blazers over sleek riding pants. It all made for a collection that was wearable, sexy and unique.

Of course, Samsonite has built its newfangled image on high-tech sportswear. And this season, “it takes at least three minutes to explain each outfit,” says Beppi Fremder, the company’s president. These techno luxe treats include neoprene and sheepskin vests as well as sturdy nylon bomber jackets with a detachable fleece lining.

At La Perla, Alessandro Dell’Acqua infused even the most delicate and lacy looks with a modern attitude. Lingerie trimmings lightened layered slipdresses, in peach and black, while a trenchcoat edged in satin was tied with a satin ribbon belt.

For his signature line, Alessandro Dell’Acqua took a similarly soft and sexy approach. The cash infusion, since the Arpels family bought the majority of his business earlier this year, was reflected in the designer’s bright mood, and in a high-quality look. He wielded ostrich feathers and scattered Swarovski stones with abandon, but chiffon flapper dresses in yellow and fuchsia stole the show.

Iceberg’s Paolo Gerani is one man who is majorly committed to the mini for fall. His collection was brimming with short skirted looks, including a brown leather dress with slick gold zippers and others in materials ranging from satin to corduroy made for every imaginable time and occasion.

Antonio Berardi is another designer whose tastes run toward the sexy. This season, he wrapped countless laces and belts around skintight jackets and the slimmest pants. “You can tighten your clothes as you want, you can make them into your second skin,” he said.

But even at the most traditional houses, the cuts are moving from narrow to even more slim. Piero and Miriam Cividini created fitted jackets, which they embellished with grosgrain ribbons. “Our customers like jackets in very feminine shapes,” said Piero. And the pleated miniskirts should prove winning, too.

Meanwhile, at Maska, creative director Simon Kneen gave the company’s beautifully tailored outerwear and suits a Forties spin, with brocade coats with fur collars and cuffs, and corsets that peeked out from tweed jackets. Kneen didn’t limit himself to that decade, however, but did a take on flapper skirts, too.

This season, those Charleston-loving It Girls captivated Antonio Marras, whose Trend Les Copains show was an ode to the allure of the Orient Express. He showed a Mongolian hooded cape over a tweed pencil skirt as well as glamorous liquid satin gowns perfect for an evening in the dining car.

At Cerruti, it was Istvan Francer’s dreamy looks that brought elegant evenings of a different era to mind. Francer’s most suave efforts included a fabulous Fifties-inspired feathered cocktail dress that was both demure and capable of sparking a little drama.

For her part, Laura Biagiotti indulged a Russian fantasy, sending out cashmere sweaters embroidered with cascades of stones, jewels and beads and full fur-trimmed skirts. And just whom did she invite onto the runway for a quick bow? None other than Ksenia Gorbecheva, granddaughter of the former glasnost leader.

Agnona’s creative director Daniela Cattaneo sought inspiration a little closer to home, and, after rifling through the archives of the venerable knitwear house, turned out a luxe fall collection with a nod to the Mod squad, including chunky capes buttoned at the shoulder and some in bright pinks for a little fun.

At MR by Marina Rinaldi, the new Max Mara-owned collection, Monica De Bellis took a sexy stance. To woo her target customer, a fuller-sized, fashionable woman, De Bellis showed slit skirts, reversible shearling and peekaboo knits. The line has retail prices that range from $300 for pants to $1,800 for coats and will be available at all 260 Marina Rinaldi stores and at Saks Fifth Avenue.

And another designer with new ideas is SetaIchiro, who, after winning last fall’s young designer competition, Enkamania, staged his first independent runway show. His Yohji Yamamoto training was evident in highly constructed skirts and asymmetrical jackets, although he also presented plenty of ideas that were purely his own.