The location of Sunnei's upcoming show in Milan.

MILAN — Simone Rizzo was downright bubbly when he opened the doors to Sunnei’s Milanese headquarters ahead of the brand’s coed show scheduled here on Sunday.

The designer, who cofounded the label with Loris Messina in 2014, has plenty of reasons to be upbeat: Sunnei has organically reached a cult-brand status its founders never envisioned, boosted by the success of the first women’s wear line, which was introduced with the spring 2019 collection and accounted for 70 percent of the overall business this season.

Additionally, in the middle of the office, sandwiched between accessories, mood boards and the communications team relentlessly typing on their keyboards, was a scale model of the show venue. But it was more than simply a miniature of a location — it represents the embodiment of a concept close to the design duo’s heart.

Dubbed “Bianco Sunnei,” or “White Sunnei” in English, the model re-creates a 43,056-square-foot urban requalification project in the city’s North-East Rubattino green area the brand supported in collaboration with the Vivi Rubattino local association and under the patronage of Milan’s municipality.

“I had been there the first time in 2009 for a rave,” recalled Rizzo. “But last year, Loris and I were passing by and he said to me ‘Look, this is a crazy place!’ Then we were back to attend an artistic performance and got to know the guys of the neighborhood, who had plenty of projects and ideas in mind they wanted to do but couldn’t realize, so we offered to join forces and work on a requalification project.”

The brand’s commitment to the cause led to negotiations with the municipality and in 20 days, it was able to revitalize the area by paving it and cleaning its park and ponds.

The designers’ ultimate goal is to transform the space into an open-air art gallery. “The sense of the project is not just about the requalification but to create an artwork, something that talks about the new Milan,” Rizzo said.

To underscore this intention, the location, which comprises concrete flooring and freeway pillars and overlooks a little lake in the park, was covered in white paint, creating a strong visual juxtaposition with the graffiti formerly on the structure.

“We really liked this clash between the two parts. We used white paint to mark the relaunch of the area: We revamped it and now it can start from zero with a new life and we can kick off a new generation of creativity,” said Rizzo, revealing that the location won’t undergo additional upgrades before the show to retain its raw appearance. 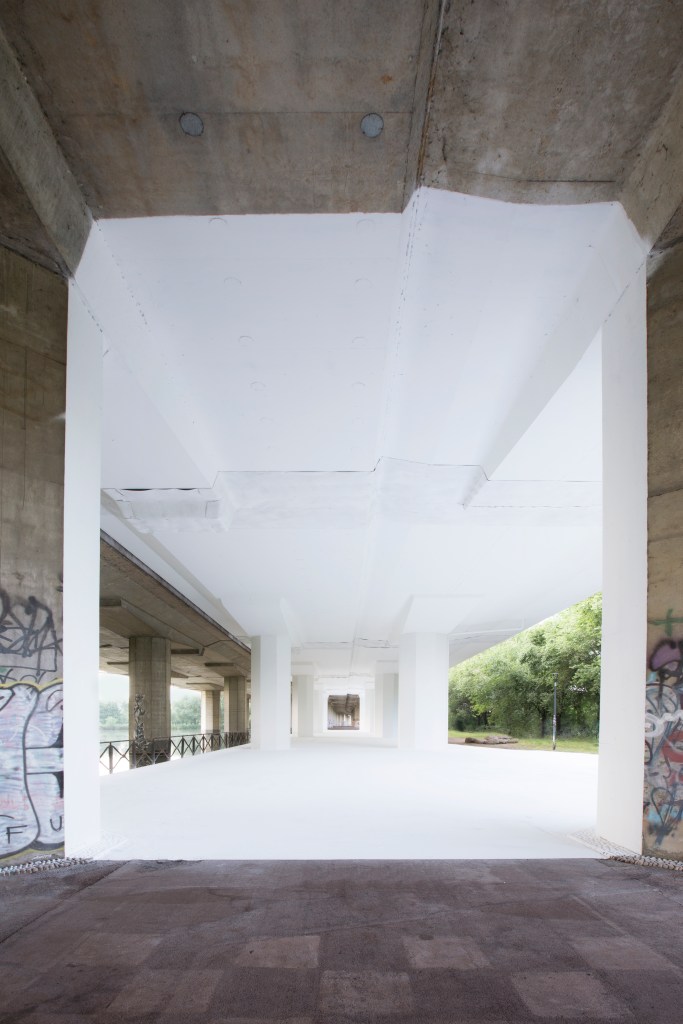 “That’s what we always look for in a show location: Authenticity, simplicity, something that doesn’t need any [embellishment,]” said Rizzo, adding that he and Messina instinctively understand when a venue works by “its magic.”

In terms of unusual locations, former venues have included the Brera art high school in June 2017, the Nilufar Depot gallery and the 31st floor of the sky-high Palazzo Pirelli tower in 2018.

Asked about the collection, Rizzo said to expect something “crazy — it’s the most introspective collection we have done so far: It will be a little bit dark, reflecting the efforts we have done lately, but also kind of lavish on the other side. It’s very mature.” The designer stressed the abundance of accessories, especially jewelry.

This season the brand is collaborating with Albiate 1830, part of Italian leading textile company Albini Group. For the occasion, Sunnei made a capsule collection of seven items crafted from shirt fabric and bearing a dedicated label. They will make their debut on the runway and serve as a starting point for a larger lineup to be launched later.

After holding the Sunnei fashion show and after party this weekend, the Bianco Sunnei space will be turned into a location hosting a range of initiatives for the city, including exhibitions, installations, events and even “temporary stores or presentations of emerging brands,” all developed under the artistic direction of the brand in partnership with the Altrove collective of artists.

“Starting in September, there will be the cultural requalification of the area as well,” said Rizzo, explaining that the concentration of initiatives will coincide with the busiest moments on Milan’s annual schedule, such as the city’s Design Week and Miart contemporary art fair.

The brand will support the area for three years, but Rizzo hopes the designers’ commitment will be extended further. “We love this city — after 10 years it became our city,” said Rizzo, who hails from Southern Italy’s Calabria region, while Messina was born and raised in Grenoble, France.

Food, music and art lead Rizzo’s list of Milan’s favorite assets, with fashion a little bit down in the ranking. “Fashion-wise, we identify more with the Japanese environment, but Milan is simple and the quality of life here is very high,” he said. “Plus, there’s a subculture movement and a collective of creative people who I believe is really going to recode the whole Made in Italy scenario in the next 10 years.”

Asked about the possibility of hosting shows elsewhere, Rizzo said Sunnei never followed trends, “including the one of leaving [Milan]. We’re more for putting down roots.” Although the brand hosts trunk shows and events across the world during the year, including New York in February and Copenhagen in 2018, the designers believe “showing in Milan is still an important opportunity for us and the city. We like to do it here, where we have our local community supporting us.”

Instead, Rizzo seems more interested in changing format than city. “One day we may not even present during fashion week. Our ultimate goal would be to have one single fashion show featuring men’s wear, women’s wear and accessories per year, an event that talks about the annual collection that will be then divided in different drops,” he concluded.