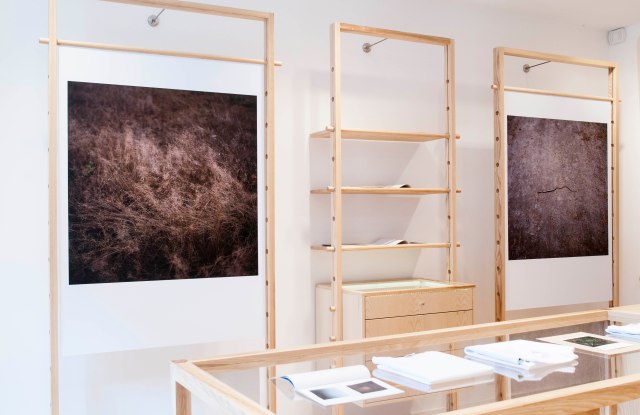 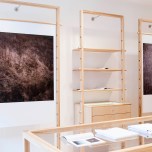 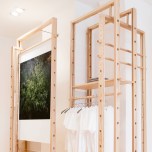 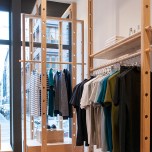 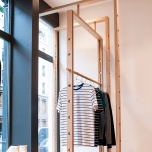 BERLIN — The British heritage brand Sunspel has opened its first store outside the U.K. in Berlin’s boutique-studded Hackescher Markt area.

The 485-square-foot shop houses the full Sunspel men’s collection and a select edit of the women’s range, as well as Sunspel collaborations such as this season’s trainers developed with Japanese sneaker specialist Shoes Like Pottery.

This first European store also easily converts into a gallery space, as the opening party last week illustrated with a show of German photographer Anne Schwalbe’s quietly evocative, nature-based images. The signature Sunspel wooden framelike rack system was adapted to allow two-dimensional works to be presented in combination with or in lieu of Sunspel merchandise.

This is just another way the more than 150-year-old brand aims to meet and engage new customers for its premium priced T-shirts, tops, underwear, shirts, pants and jackets.

“We need the tactile connection,” owner Nick Brooke told WWD. “And that’s why we have to have stores. Once people see and touch it, they understand the price points. And if a person has bought Sunspel once, then they come back to the store or buy online, or buy Sunspel for their friends. It’s not standard fashion behavior, but we’re a brand that people have to personally discover.”

That said, Brooke added that he’s “not a huge believer in a vast number of stores for Sunspel.” There are currently five, soon to be six directly operated stores in the U.K., and working with a partner, a second Tokyo door will soon open, with Osaka in the planning. Alongside the German debut, France, Scandinavia and possibly the U.S. are being considered as the next retail destinations.

On a wholesale basis, Sunspel is carried by about 250 international stockists, such as Barneys New York and Opening Ceremony in the U.S., Lane Crawford in Hong Kong, Isetan in Japan, Andreas Murkudis and the Store in Berlin and Harrods and Selfridges in the U.K., where Sunspel has been among the top two best-selling underwear brands. In the case of Harrods (and in earlier years Barneys), Sunspel produces the store’s house label underwear.

Sunspel’s European debut in Berlin “was an important choice for us,” Brooke remarked. “Sunspel is about tradition, heritage and quality, but more recently we’ve concentrated on being modern in cut and design. And Berlin as a city is quite similar.”

He noted the brand’s online business is growing faster in Germany than elsewhere. “The German customer seems to appreciate quality and clean design, and thus we felt it was time to focus on Germany in a serious way, with a physical shop where we can present the brand and have events.”

Brooke bought the Nottingham-based family firm 10 years ago. It was known for having introduced boxer shorts to the U.K. in 1947, redesigned with a back panel versus center seam. Sunspel is also credited with making the earliest English T-shirt, and has long produced T-shirts and other items for designers like Margaret Howell, Thom Browne and Kris Van Assche. “I thought if we’re doing this stuff with these incredible designer labels, it’s time we develop Sunspel a bit more. When I came in, we had just been an underwear brand in the U.K.,” he pointed out.

As luck would have it, Brooke knew the costume designer for the upcoming James Bond film, with the upshot that a redesigned Sunspel top was worn by Daniel Craig in “Casino Royale” in 2006, and thus polo shirts were added (the Riviera Polo) to the range. Women’s wear was relaunched in 2012, and today Sunspel’s assortment spans fine cotton underwear, sleep and loungewear, T-shirts and tops, merino wool and cashmere sweaters, woven shirts and pants, and accessories, from socks to bags to belts to scarves. There’s also been a series of collaborations including sunglasses with Cutler and Gross, Cheaney leather brogues, Kijima Takayuki hats, and, for fall, a Sunspel-Gloverall duffel coat. Sunspel’s Long Eaton factory, founded in 1937, remains at the heart of product development and production, but the brand also works with selected facilities in Portugal and Turkey.

Next extension on the drawing board:  Sunspel is working with a Japanese specialist on aromatherapy-based T-shirts and underwear that can go into a travel pack with other relaxation items like a travel candle. “Basically, that’s what our customers use our products for — travel and holidays. And it’s all very linked to our base fabric (the Q14 cotton air weave) and the skin,” Brooke said.