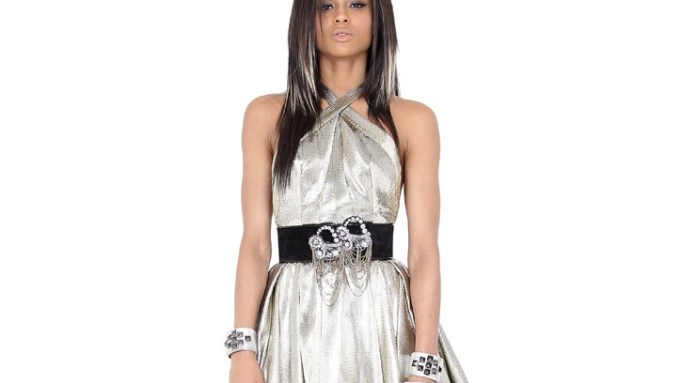 Ciara Princess Harris — Ciara to her fans — brings three publicists, a personal assistant, a bodyguard and two rodent-sized dogs to her WWD photo shoot. Travel light, she does not. But there is nothing else diva about the multiplatinum pop and R&B star; she’s unceasingly polite, energetic and game for just about anything during the eight-hour shoot. Plus, staying fresh is what pop music is all about, and reinvention à la Madonna what its female stars must aspire to. So who can fault Ciara — whose third album, “Fantasy Ride” (LaFace/Jive), drops May 5 — for her team of image custodians? Even the bodyguard lends an aura of white-hotness to the 23-year-old: She is magnetic to the point of posing a safety risk.

Speaking of risks — and if the Richard Prince for Louis Vuitton bag on her arm is any indication — Ciara (pronounced SEE-era) has of late been taking a few herself, of the fashion-forward, supervixen sort. It’s a departure for the Grammy winner, who in the past has opted for sporty-street styles and was even featured in a 2007 ad campaign for Jay-Z’s junior streetwear label, Rocawear.

“I’m all about the power and the strength right now,” Ciara says. “I’ve started to just take on that mind-set — ‘Try it! Try something different. You can do this!’” Take the video for “Go Girl.” She is a sleek and sultry secretary one minute — with a black bob, black lips and a black smoking (a look seemingly plucked from Yves Saint Laurent’s fall ’08 runway) — and a metal bikini-clad, Mugler-esque superheroine the next. And in the video for her chart-topping duet with Justin Timberlake, “Love Sex Magic,” Ciara slithers around her costar in monochromatic bodysuits and heels. [Watch the video to see Ciara share more details about working with Justin Timberlake.]

She’ll also be rocking a power-babe look when she opens for Britney Spears’ Circus Tour in the United Kingdom. Then there’s her “Fantasy Ride” album artwork, designed by Marvel Comics’ Bernard Chang, which depicts Ciara as her superhero alter ego, Super C.

Gone are the days of swimwear-as-daywear, one of the singer’s sartorial standbys during the promotion of her first album, 2004’s “Goodies,” released when she was 18. For better or worse, that look — one-pieces worn with low-rise jeans or bikini tops paired with baggy track pants — was all Ciara’s idea. “From the very beginning, it was always a reflection of me. I was very vocal, always vocal,” she says of her early style. “It worked for me at that time, and [the label] just let me roll with it.”

To be fair, Ciara’s “Fantasy Ride” push is not unlike those of other pop music starlets, who have successfully used the release of a new album to herald a dramatic change, whether image- or sound-related (ideally, both). “The Emancipation of Mimi,” for example, famously reignited Mariah Carey’s waning career in 2005. And Rihanna was a sunny R&B singer with two albums under her belt until 2007’s “Good Girl Gone Bad” turned the Barbados-born performer into a fierce fashionista and umbrella-wielding international sensation. However, Ciara seems even more in control of her look five years — and millions of records — after her debut.

For this album, the follow-up to 2006’s “Ciara: The Evolution,” she enlisted celebrity stylist Mariel Haenn to work with her on videos, including “Go Girl” and “Love Sex Magic,” as well as for most press and other appearances. “I really wanted to try her,” Ciara says of Haenn (who also counts Rihanna as a client). “She’s young and she’s new and I felt she was on to some really cool things.”

This is a sentiment that’s also echoed in Ciara’s view of the fashion world and, in particular, emerging designers, whose looks she wears on these pages. “You know what?” she says, as if making the connection anew. “It’s almost like myself — I’m young and haven’t been doing this for a long, long time, so I relate [to young designers]. It’s cool to see them get opportunities to share their creative visions and to actually be successful at it.” And Ciara is certainly supporting fashion newbies at her WWD interview, dressed in a white tank, Current/Elliott skinny jeans and booties by 2009 CFDA Swarovski Award nominee Alejandro Ingelmo, all culled from her closet. “There is a lot of new energy and a lot of new ideas that these designers are bringing,” she says. “It’s also cool to know what’s coming, to kind of be on top of something in the early stages.”