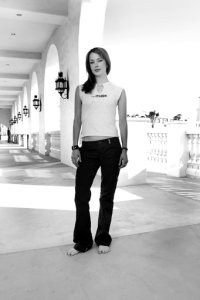 HUNTINGTON BEACH, Calif. — The specter of war hung in the air at the ASR Back-to-School show here, perched above Pacific Coast Highway, but so did the briny scent of the sea, which helped lift spirits and energize buying.

In its second year, ASR, which ran Tuesday and Wednesday at the Hyatt Regency Resort & Spa, had the benefit of being the sole b-t-s show after Surf Expo backed out of its run last summer, but it took nothing for granted. Show officials wooed retailers with complimentary breakfasts and lunches and an outdoor fashion show and party, and vendors who purchased a booth received a free hotel room to pass on to key accounts.

“We were focused about delivering retailers and buyers to the manufacturers and we were happy we achieved that,” said Kevin Flanagan, ASR show director. Split among two ballrooms at the hotel, attendance was up 20 percent to 500 compared with last year, with about 167 booths representing 150 brands, about 50 percent more than last year.

Among brands breaking fall lines were Billabong, Volcom and Lost Enterprises’ Lost Girl. Hurley previewed at the ASR show in January, where its executives felt the brand could capitalize on national exposure, but they still thought it was worth another visit to ASR for the fall edition.

“The reps can see accounts in two days that would normally take two weeks on the road,” said Charlie Setzler, O’Neill’s national sales manager. “This helps us get our orders earlier, buy and ship earlier, and forecast better.”

Even without vert ramps, barely clad babes and beer kegs — mainstays at the January and September events — the energy was palpable. Manufacturers reported brisk buying at the show and even decent business to date.

“We’re up 20 percent in the first quarter compared with last year, and for fall we’re at 50 percent of our goal compared with the same time last year, when we were at 35 percent,” said Christina Smith, Split’s sales manager.

“We’re not worried, but if bombs start dropping, it’s hard to say how consumers will react,” Naudé said.

While most clothing makers said they weren’t changing the way they do business, they said they were refraining from extra commitments.

“We’re in growth mode, so we could create a big marketing push, but we’re waiting to see what happens in the near term,” said Split founder Dave Patri.

The move was in line with retailers’ caution. Ron Abdel Fattah, owner of the four-store chain Jack’s Surfboards here, said he was buying 10 to 20 percent less compared with last year, but said business must go on.

“Yes, war will affect things and the mindset of people, but we can’t keep stores empty,” he said. Denim, corduroy and twill pants as well as sweatshirts, zip-up hoodies and wovens were the fall looks his handful of buyers were focusing on from Roxy, O’Neill, and Billabong.

Adi Zucker, owner of Ocean Gear in Manhattan Beach, Calif., said she also was playing it safe, even though March sales are up 7 to 8 percent.

“We’re not picking up new lines, just lines we carry,” Zucker said. Since she skipped the January ASR, she was focusing on cargoes, outerwear and denim.

Alcoa, Tenn.-based Proffitt’s, a unit of Saks Inc., was scouting out labels for its new B3 — Blades, Bikes, Boards young men’s section unveiled in 16 of its 54 stores since last August. So far, Quiksilver, Hurley and Billabong are among the lines it carries.

It’s a bigger push for the chain, which someday sees the idea spilling into its junior section.

“We’re banging on doors, willing to work with manufacturers, because we really believe in this concept,” said Greg Baltasar, Proffitt’s divisional vice president and divisional merchandising manager for men’s sportswear.