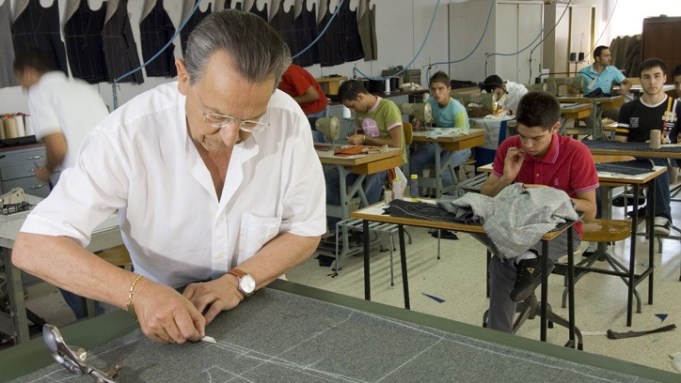 There is an old guard of tailors in New York City who will tell you tailoring is a dying art. They fit a common profile: born in Italy, generally in the south, where they learned the trade of suit making as apprentices before immigrating to the U.S. They are as young as 60, but many are older, and some say they are the last; that they are not being replaced.

“No one wants to be a tailor anymore,” said Pasquale DeFalco, 78, one of six master tailors at Martin Greenfield Clothiers Ltd., a suit shop in Brooklyn that produces handmade garments for the likes of Brooks Brothers and Band of Outsiders.

The demise of the tailor has been foretold since the arrival of ready-made, mass-produced clothing. Technophiles argued his scissors would be replaced by electronic cutters, his needle and thread by computerized sewing machines. If suit making’s complicated ballet of proportion and construction could be reduced to measurements and numbers, a tailor’s knowledge could be completely automated, so the logic went.

And, in many cases, that has happened. But at the highest levels of suit making, identified by hand-stitched construction, tailoring has proven to be irrepressible. While they no longer occupy the position they once held in the apparel business, tailors are surviving and even thriving — just in new places. Today, they hail from the new centers of suit manufacturing: China, Chile and Eastern Europe. Even Italian and American companies that continue to produce domestically are finding ways to keep their traditions alive by either recruiting tailors from abroad or training new ones at home.

So DeFalco is only partially right. The number of tailors made in his mold has indeed dwindled, but as suit making has gone global, so, too, has the trade.

Across the worn floorboards of Martin Greenfield’s factory is Raul Pullutasig, a 37-year-old Ecuador native and up-and-coming tailor. His story is similar to DeFalco’s, but it begins 40 years later. Pullutasig started as an apprentice in a tailor shop at age 15, then moved to Mexico to work in a suit factory, learning hand-sewing along the way.

“[South American tailors] tend to be well trained and quite skilled,” said Tod Greenfield, the shop’s vice president and son of the owner. “I’m sure that generation of tailors will take over as the Italian guys retire.”

Today high-end suit factories are as global as the industry itself. At Martin Greenfield, 12 languages are spoken. “We get by without translators,” Tod said. “Tailoring has a universal language.” Operators at Hickey Freeman’s shop in Rochester, N.Y., hail from more  than 20 countries. Halfway across the U.S. at Oxxford Clothes, a Chicago-based maker of hand-crafted tailored clothing, there are 15 master tailors overseeing the floor, hailing from Europe as well as Asia and South America.

“I think people are so focused on Italy and Savile Row as the only sources of tailors,” said Mike Cohen, president of Oxxford Clothes. “The world is so small now. We have wonder tailors from South America that do immaculate work. I remember people used to say, ‘Next year there will be no tailors.’ We haven’t had that problem.”

Most of the 225 cutters, sewers and pressers in Oxxford’s shop are immigrants who came to the U.S. with some level of skill — a knack for sewing buttonholes, making pockets or attaching collars.

There are some notable exceptions. Last year, in a move symbolic of the changes reshaping the tailoring trade, Oxxford’s long-time, Italian-born head tailor announced plans to retire. His replacement is a man from Minnesota.

The U.S. was home to 31,550 tailors, dressmakers and custom sewers as of May 2007, the most current data available from the U.S. Bureau of Labor Statistics. Most of them work in clothing stores; fewer than 4,000 are employed in cut-and-sew facilities like Oxxford’s or Martin Greenfield.

The bureau doesn’t break out the number of tailors or the percentage of them who are U.S. born. But experts say the figure is tiny.

“There are few American tailors left,” said Mark Metzger, president of the Custom Tailors & Designers Association, noting that foreign-born tailors have resisted joining the association over the years. “We used to fill up the Waldorf-Astoria at our annual meeting with nearly 1,500 members. This year, 50 will attend.”

The lack of American-born tailors means domestic suit makers have to rely on laborers from abroad — easy enough for shops in major cities such as Chicago and New York, where immigrant populations are large.

Not so for Hickey Freeman, which operates one of America’s oldest suit factories in Rochester. Finding operators, let alone highly skilled tailors, is a major concern for the shop, which hires agencies in Turkey and China to recruit sewers and cutters with at least two years of experience. It can take seven years to get a recruit through immigration. Once they’re here, the company takes considerable pains to retain them. It provides sponsors with green cards, housing, language classes, driving classes and signing bonuses. It works to obtain green cards for the tailor’s family, too, and helps get their kids signed up for school. Hickey Freeman sponsors 10 percent of the factory’s 492 employees.

Before World War II, a tailor started with an apprenticeship. That meant performing menial tasks in a tailor shop for years — sometimes paying the shop owner for the privilege — until the master tailor decided he was ready to begin learning. “The first week [the master] tied my middle finger down to my palm to help develop my muscles for the thimble,” said Mario Mannarino, 67, the head tailor at Martin Greenfield. “Then I swept floors.”

Mannarino apprenticed five years before emigrating — a short education compared with his peers, some of whom maintained that it takes 20 years of training to become a tailor.

But as the apprenticeship model faded, and with it a steady influx of new tailors, Italian  suit companies have taken matters into their own hands. Brioni, the Italian fashion house  known for handmade suits, opened a tailoring school in 1985 after it began having difficulty hiring qualified tailors.

“Veteran tailors still exist in Italy. However, the old tradition of teaching skills [in shops] does not exist anymore,” said Andrea Perrone, the company’s co-chief executive. “The lack of new tailors jeopardized the survival of the firm.”

Today, the five-year program, which admits 20 students a year, supplies enough skilled laborers for Brioni’s shop in Penne, highlighting the resilience, at least in Italy, of craft professions in the 21st century.

Now Brioni is exporting its expertise. The company inked a partnership with the Royal College of Art in London last year, with the goal of teaching suit making to the students enrolled in the college’s men’s wear fashion program. As part of the program, aspiring designers spend time at Brioni’s tailoring academy.

“The partnership with the [school] is fostering and encouraging the tailoring vocation outside of Italy, and we like to support this strategy,” said Perrone. “Young designers are discovering that becoming a master tailor is an interesting profession. He is no longer an old man in a tailor shop, but rather an important manager.”

Brioni is not alone in taking steps to foster education. Kiton, a Neapolitan brand whose handmade suits are considered among the best in the world, also operates a school within its premises. Twenty-five students a year start the five-year program, which includes two years of study and three years of additional training before they join Kiton’s team.

“Without the school it would be very difficult to find workers,” said Antonio De Matteis, Kiton’s chief operating officer, adding that most students hail from Naples and the region that surrounds it. “The average age of our tailors is now 36 — not what you think of when you think of a tailor.

When the school launched a decade ago, Kiton had trouble filling its seats. The idea of learning an antiquated craft hadn’t caught on. “Today we have a waiting list of 100 people,” De Matteis said. “They know it’s a job they can have for life.”

Longevity seems to be the common thread for many tailors, who practice their century-old craft well into their golden years.

“I keep working because I can,” said Martin Greenfield’s Mannarino, whose primary job is to turn sketches from the shop’s designer clients into patterns. “And because I continue to get better at it.”

He works in the pattern room, cutting paper so that the new tuxedo from Rag & Bone or the cropped jacket from Band of Outsiders reflects the designer’s vision. In the background, a computerized patternmaker whirs, transforming Mannarino’s work into specs that the factory operators use to make suits.

“And besides,” he noted, “that machine still hasn’t figured out how to do what I can do.”