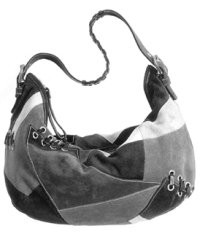 NEW YORK — The department store main floor is like a trendy nightclub: It’s incredibly hard to get in, but those who eventually make it past the velvet rope find themselves in a loud, busy and overstimulating environment where it takes a lot of extra work to stand out from the crowd.

The accessories department, often located on the main floor, is among the most crowded and competitive areas in retail today. Typically, the assortment covers the gamut from handbags and leather goods to costume jewelry, fashion watches, sunglasses and cold-weather goods.

Matt Rubel, president and chief executive officer of Cole Haan, added: “The main floor is critical. It gives you the ability to expose yourself to the broadest audience. It also creates the opportunity to put forward some of the best fashion ideas to the customer in an easier and clarified way.”

In recent years, the main-floor momentum has changed dramatically. Where once there were a few established players who focused exclusively on accessories, there are now fresh faces popping up nonstop, vying for a share of the $30 billion accessories business.

From established apparel brands and designers branching out with licensing deals to soccer moms stringing beads in their living rooms, everybody wants to be an accessories designer these days, and the main floor is shifting accordingly.

The survival rules become more severe as economic conditions spiral. Designers and fashion brands often need a solid sell-through record and strong marketing strategy to support department stores. As retailers are increasingly trying to stimulate store traffic with price promotions, vendors are often asked to make vast concessions to be on the main floor, including picking up the markdown tab and accepting chargeback issues at the end of the season.

In such a tough environment, vendors often lament that compelling product has fallen by the wayside, adding that buyers are forced to work on a set matrix system that leaves little room — and necessary open-to-buy — for creativity.

While there are variations depending on the store tier, there are several key main-floor players with heavy frequency in major department stores. These include, in no particular order, Liz Claiborne, Carolee, Cole Haan, DKNY, Nine West, Adrienne Vittadini, Monet, Dooney & Bourke, Francesco Biasia, Etienne Aigner and Maxx New York.

According to industry sources, Coach leads the main-floor pack in main-floor momentum. Under the creative guidance of Reed Krakoff, the New York-based leather goods firm has in recent years successfully been able to turn its business around with a cohesive, fashion-forward accessories assortment, a strong marketing effort and a slew of stores that conveyed Coach’s image as a preeminent American leather goods house and made this desirable for consumers who peruse the department store main floor.

Coach experienced significant increases in sales at U.S. department stores as point-of-sale sales rose about 25 percent in the quarter.

“What we are experiencing, during our renaissance, is a growing market share as we attract a growing number of new and stylish consumers to the franchise and maintain our strong classic consumer base,” Coach chairman and chief executive officer Lew Frankfort said at the time the figures were announced. “No one else in accessories offers accessible luxury across multiple channels and different geographies.”

Coach’s success has not gone unnoticed in accessories circles. Many players have started updating their product assortment — pushing fresher, more colorful designs to grab the consumer’s attention as she hurries through the main floor — and clear trend statements to simplify the shopping experience.

“Previously, the main floor was about collections of merchandise,” said Bucciarelli at Claiborne. “It has become more about collection of merchandise and impulse items, and telling more cohesive item messages to the consumer. As she is running through the department, the more we can hit her with messages that are clear and titillating, the more we will continue to win.”

Both Cole Haan and Dooney & Bourke have in recent seasons stepped up the color and fashion quotient in their leather goods collections and introduced strong advertising messages to add a new client base. Industry insiders said that the brands are growing on the main floor.

“In our area, the competition is changing,” said Gary Dembart, Dooney & Bourke’s executive vice president. “It’s more competitive because it continues to become a designer branded area. There used to be companies that were only handbags and accessories companies. Ready-to-wear companies have ventured into accessories and we compete with them.”

As competition becomes more fierce and store traffic declines, firms face major challenges on the road to success — and rumors and speculations about main-floor players abound. In 2001, French leather goods firm Lancel, a division of Compagnie Financière Richemont AG, aimed at becoming a major player in the U.S. market, with much fanfare, including nationwide advertising, a store rollout and a network of main-floor accounts, including Nordstrom. But earlier this month, Richemont warned that its operating profits could fall by up to 40 percent in the year ending March 31 and said it planned to scale back its loss-making Lancel business in the U.S.

Some executives remarked that despite the challenging economy — when one would expect less-expensive product to flourish — the moderate price point has been underperforming because women continue to look for aspirational brands, which often carry a higher price tag. But that’s not stopping stores from demanding a better pricing policy.

Maxx New York has extended its collection with a lower-priced MX collection, targeting the second tier department store and a price tag under $100. The company also offers exclusive designs to department stores to stand out in the crowd.

Etienne Aigner, meanwhile, has made an effort to reduce the number of price points in its assortment. Over a year ago, Aigner leather goods were available in a range of 18 price points, now there are only eight. The average price point on the main floor was also slashed. Last fall, 45 percent of the line was over $100, while this year, only 5 percent is, according to Jim Piotti, vice president of sales at Aigner Group Inc.

“We thought it was more critical to simplify the prices and compress them,” said Piotti. “It is really to help merchandise the product and to make it easier for the customer to understand it.”