LOS ANGELES — The misses’ customer is undergoing psychological cosmetic surgery — not necessarily reshaping her body, but rather her mind, getting younger in her attitude about clothing. 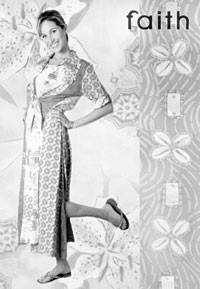 LOS ANGELES — The misses’ customer is undergoing psychological cosmetic surgery — not necessarily reshaping her body, but rather her mind, getting younger in her attitude about clothing.

This story first appeared in the January 28, 2004 issue of WWD. Subscribe Today.

The emotional transformation isn’t lost on misses’ vendors, including Carlsbad, Calif.-based apparel company, Surya, whose Balinese print-oriented label, Faith, is also due for a makeover, according to partner Susan Macy. Its sales peaked in 1999 at $12 million; she expects sales of $4 million this year. She attributes part of the slowdown to the changing needs of geographic regions, where resort-driven lines have different interpretations.

“The tropical prints work in super resort areas like Florida, but Dallas needs more fashion,” she said. “I don’t want to throw it out, but I think it’s time to remodel the line. Or, as when you remodel a house, sometimes it’s easier to knock it down and start all over.”

Change is nothing new for the company. Evolving with the trends or chasing looks isn’t always the best business strategy, but Macy believes adopting a Darwinian approach has kept her business aloft for more than two decades while many of her peers perished.

What started out with a $1,000 investment for a single line of batik kimonos from Bali in 1981 — when Macy fell in love with the tropical isle on one of her many monthlong global jaunts taken in between gigs as a cocktail waitress and legal services administrator — morphed into a company of three brands that this year spans the misses’, updated and contemporary categories, and is carried at 3,000 specialty stores nationwide.

She launched Surya with her sister, Nancy, who is president and moved to Bali to oversee production at a subcontracted factory. Susan Macy ran the company’s boutique in La Jolla, along with wholesale accounts, growing them to a $4 million business.

Eventually, they closed the retail operation of four stores in the mid-Eighties and switched to a total wholesale model, hitting it big with lace cutout styles à la Madonna that sold at Judy’s and Contempo Casuals. Patch prints followed, and the company pursued misses’ sportswear and related dresses, changing the label’s name from Surya to Faith. The line, which wholesales for $27 to $59, comprises long, patch skirts with elastic waistbands, bias ruffle dresses and camp shirts in soft fabrics like rayon.

As the Macys mull over the fate of Faith, the pair hedged their bets three years ago and launched Haven Bleu, which could notch $7 million to $8 million in sales this year, to service their retailers’ updated needs. A stretch-based line of mesh tops, embellished T-shirts and print sundresses in twills, poplin and corduroy, Haven Bleu wholesales from $22 for tank tops to $49 for dresses.

The two labels target different customers, which means the company can sell deeper to its existing accounts that often carry inventory across many categories, as well as hunt out new stores.

“We’re a 30-and-up crowd here, so we buy both lines, which we do a strong business in, especially in pants and tops,” said Mark Ramenofsky, owner of two Island Hopper stores in San Diego. “They’re very unusual prints, and our customers appreciate the beading and the embroidery.”

The sisters also launched Basil & Maude at Intermezzo this month, wanting to jump on the contemporary craze and already are picking up orders from two California stores, Wendy Foster in Montecito and Ooh La La in Carlsbad, and Julian Gold’s four stores based in San Antonio. The summer line, set to ship April 30, offers shorter skirts in 16- and 26-inch lengths, and focuses on two colorways per garment, giving the clothes a more refined aesthetic. Screened graphic half-circle skirts with side zippers and flared hems present a flattering silhouette buyers appreciate, Susan Macy said. Lycra spandex jersey tops in solids with multiple color options and unusual shapes, such as twist tanks, shelf-bra bustiers and others, work with the printed bottoms. It’s expected to bring in $2 million in first-year sales.

“I grew up in Mexico City, so I liked the festive looks of the skirts — they had a nostalgic feel about them that just seemed to be like my customer,” said Wendy Foster, whose self-named store doesn’t carry Surya’s other lines.

Keeping that retailer response positive isn’t an easy endeavor for the Macys.

On top of the demands of overseeing three lines and three separate designers, the company also develops its own prints by buying artwork and creating 30 to 40 prints alone every season for Faith and Haven Bleu. Then there’s the travel factor, as designers visit the island factory five times a year and Susan Macy goes at least three times — plane trips of 20 hours each way. The factory, overseen by their brother, Doug, for the past four years, staffs about 200 employees who manage samples, production, shipping and administration.

“We still have to be there to touch the merchandise, see the garments — things don’t always come out the same as in your imagination,” she said.

But theirs is also a “happy” business, she said, where names take on special meaning and provide an anchor amid the industry’s ups and downs.

Surya translates into “sunshine” in Indonesian. Faith offers up a sense of hope and longevity. Haven Bleu is the name of the owners’ four-year-old grandniece. And, Basil & Maude are the monikers of Nancy Macy’s two pooches, a Chihuahua and a poodle.

“We’re saying these words all day and we’re in the environment all day long,” said Susan Macy, “so we might as well be having fun.”