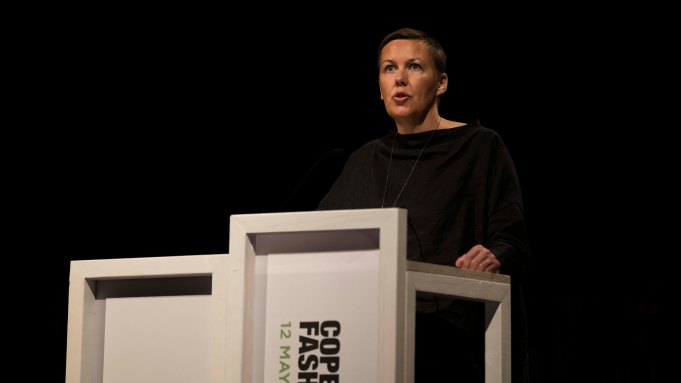 COPENHAGEN — The future of sustainability in fashion is taking shape in Copenhagen. And it will involve collaboration, innovation and education.

These were among key themes at the Copenhagen Fashion Summit held here Thursday. Some 1,250 fashion industry delegates flocked to Copenhagen Concert Hall for the event. The fourth edition of the biannual meeting organized by the Danish Fashion Institute on behalf of the Nordic Fashion Association, under the patronage of Crown Princess Mary of Denmark was themed “responsible innovation.”

The Crown Princess, sporting a white skirt from H&M Conscious Exclusive collection, noted that the event is “seen by some as the Davos of the fashion industry” and added that the Danish capital is a relevant host city as it “holds the ambition of becoming the first carbon-neutral capital in the world.”

The energy was palpable when students who had participated to the Youth Fashion Summit (held during three days in the run-up to the Copenhagen Fashion Summit) made their pleas on stage for a brighter future for the fashion industry. Each demand integrated some of the 17 United Nations sustainable development goals adopted in 2015 into the fashion industry and started with: “As inheritors of your roles and our waste, we demand…” The program, with a baseline “The Voice of the next generation” led by Dilys Williams, director of the center for sustainable fashion of University of the Arts at London College of Fashion, gathered 116 students from 40 countries. Participating schools included Aalto University School of Arts, London College of Fashion, Esmod Berlin, McGill University and Princeton University.

Participating companies were eager to prove they’re rolling up their sleeves and ahead of the curve.

“We need innovation and collaboration on an unprecedented scale,” urged Nike’s Jones.

“Designers are problem solvers. They like to work with constraints,” she explained to WWD. “We see that an amazing opportunity to unleash designers as the architects of the future closed loop approach that we’re going to take. We challenge them to design unbelievable breakthrough performances for athletes and unbelievable sustainability breakthroughs. And then, if you are able to give them a palette of materials to play with, that bring low-impact and recyclable materials, and if you’re able to have that produced in factories that are sustainable, you really unleash the power of a company like us to create products that delight the consumer, meet athletes’ needs and, by the way, are sustainable. We’re triggering creativity by setting these new principles by which to design.”

During her speech, she cited the example of Nike Flyknit. “The traditional way to make shoes has been to cut and sew. As you can imagine, cutting all of those pieces creates wasted material. Nike Flyknit disrupts this tradition in a radical way. With Flyknit, we knit the shoe’s upper out of individual strands of yarn. As a result, this technology produces 60 percent less waste than traditional cut-and-sew. It has saved 3.5 million pounds of waste since its launch in 2012,” she said, noting that Flyknit is now a billion-dollar business. “We can make money with sustainability,” she asserted.

She also stressed the urge to converge toward a single code of conduct, common monitoring protocols and auditing standards for the industry, in order “to have a real chance to change the industry at an accelerated pace.”

Rick Ridgeway, vice president of engagement at Patagonia, whom Amber Valletta, the summit cohost, introduced as “the real Indiana Jones,” said Patagonia came up with a very high-performance wetsuit made with natural rubber, replacing Neoprene. “It’s as performant as neoprene, or more. For extreme sports, having the highest-performance materials possible is a matter of life or death,” he noted.

Ridgeway ended his speech by tackling an “inconvenient truth.” “We ran a now famous ad on Black Friday in the New York Times with headline ‘Don’t Buy This Jacket’.  We were telling customers that no matter how hard we try to cause no unnecessary harm; guess what, the jacket still required over 135 liters of water, still released 20 pounds of CO2 gas emissions and still left behind about two-thirds of its weight in waste. To achieve true sustainability, we got to think about adjusting our business model, which means an inevitable reduction of global annual compounded consumption,” said Ridgeway.

Anna Gedda, H&M’s head of sustainability, said this year, the H&M Foundation held the first Global Change Award as an innovation challenge to close the loop for fashion. Some 2,600 ideas were entered and five winners were chosen, including microbes that can eat and recycle polyester and a textile fabric made out of citrus waste. She noted that H&M has made investments in two start-ups: U.K.-based Worn Again, which is developing an innovative chemically based recycling technology, and Sellpy, a Swedish-based company that picks up vintage things in order to prolong their lives.

The Swedish retailer published its supplier factory list already in 2013. “Just a few weeks ago we expanded it to cover second-tier suppliers such as fabric and yarn mills involved in making about 50 percent of our products. This may seem like a natural move, but it wasn’t so long ago that we actually had a safe where we locked up our supplier lists,” Gedda said.

Earlier in the day, Livia Firth, founder of the Green Carpet Challenge, blasted fast-fashion players, calling the “crazy cycle of consumption” the “elephant in the room.”

Power ladies Nadja Swarovski and Susan Rockefeller participated in a panel on fashion and philanthropy, moderated by industry consultant Julie Gilhart. “I was pleased to see the youth asking for accountability,” said Rockefeller, referring to the students of the Youth Fashion Summit. “They seem unified, that’s amazing,” agreed Swarovski, the Austrian crystal-maker executive board member.

The summit served as a platform for the launch of the Italian Chamber of Fashion’s “chemical substances guidelines,” aiming to reduce the use of groups of chemical substances along the chain. Separately, Shubhankar Ray, global brand director of G-Star, launched the Ocean Clean Wash charter in partnership with Plastic Soup Foundation, which focuses on reducing the ocean plastic pollution, especially micro plastic released into the ocean from washing clothes.

“I am proud that it has been ‘Sustainability Week’ here in Copenhagen,” said Kruse, chief executive officer of the Danish Fashion Institute, citing side events including Youth Fashion Summit, the Educators Summit, the annual membership meeting of the Sustainable Apparel Coalition and Planet Textiles 2016: The Sustainable Textile Summit. While Kruse thinks the summit has reached its maximum capacity at around 1,250 people, she said it’s not set yet if it should remain a biannual event or evolve toward an annual event.

Most importantly, Kruse envisions Copenhagen “as a hub for sustainability in fashion,” with even more side events coinciding with the summit down the road.