More than 300 graduate collections are being exhibited at a three-day festival, open to the public, hosted by the school. 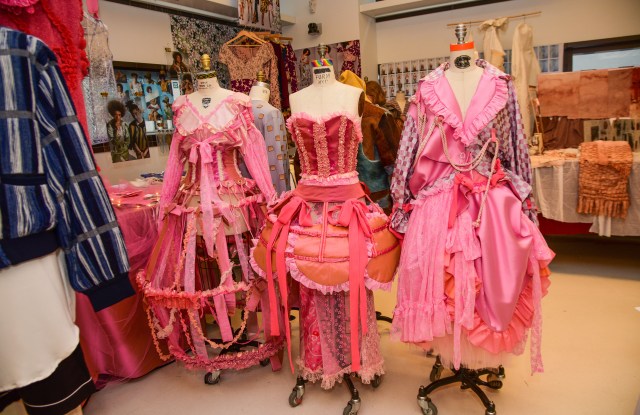 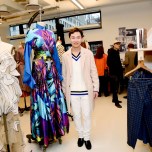 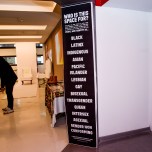 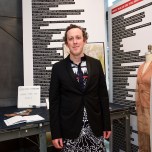 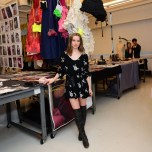 More than 300 students from Parsons School of Design’s AAS Fashion Design and Fashion Marketing and BFA Fashion Design programs are exhibiting their graduation collections during a three-day festival that runs May 16 through May 18. For the first time, the exhibition is open to the public.

Spread over three floors of The New School’s University Center, the collections are curated by topical themes, such as Materiality, having to do with textile innovation, Social Justice, Systems and Society, as well as designs having to do with sleep, and a whole lot of gender and race identity. There was a lot to take in, with many of the garments on display falling under deconstructed, gender-fluid and fantasy-driven.

In terms of textile innovation and sustainability, one standout collection was by Gal Yakobovitch, who was inspired by her father who used to make surfboards in the Seventies. She sought to find biodegradable replacements for the classic materials used to make wet suits and such, developing her own tapioca bioplastic, gelatin glass and gelatin foam from ingredients that can mostly be found in a bodega and making her materials in her own kitchen. “This one is remeltable and recastable,” she said, holding up a rubbery material made from gelatin, glycerin, honey, soap and Listerine, which she used to make a wet suit. “I already tested it in a surfing situation and it holds up well in water. Also, if it gets a tear, you can remelt it again.”

Subin Hahn explored gender fluidity through clothes and accessories that skewed far more classically feminine — he used sprinted silk organza, bright colors and lots of ruffles — to push the unisex line to a new place. “Unisex wear is usually done in a minimal aesthetic,” said Hahn. “I really wanted to emphasize that feminine designs can be more gender-neutral.”

Meanwhile, William Stautberg redefined traditional men’s wear by focusing on homemade clothes crafted from patterns ordered from catalogues from the Fifties through Seventies. Specifically, he took Ivy League-inspired staples from a man’s wardrobe and “subverted them into all-in-one jumpsuits,” he said. “I’m really obsessed with jumpsuits. It’s this humorous thing to me.” Cardigans, trenches, button-down shirts and underwear were done as all-in-ones, a version of which Stautberg was wearing. It stood to note that his aesthetic seemed like something Thom Browne would like. “I interned there for two years,” Stautberg said.

In the Social Justice room, Jonathan Lee had created three looks, some taking their cues from bulletproof vests, inspired by the subjects tackled on his podcast “F–k Your Westpectations.” “It’s about racial stereotypes and racism,” said Lee. “Not just black-and-white issues but minority issues. Everyone practices racism in some way, whether you’re aware of it or not.”

A few feet away in the Systems and Society section was a seemingly lighter (but not really) point of view on age by Katrina Simon. After playing with her four-year-old cousin with crayons, she was inspired to use “crayons as the child’s tool as a means of intergenerational communication,” she said, explaining that she created earrings, bracelets and even replaceable heels for shoes out of melted-down and molded crayons. She had a chair covered in white paper to demonstrate how they colored off when one wears them. “We have these expectations that you can’t use the crayon anymore in adulthood, and you have to accept your age, but why do you have to?” said Simon, who scored a sponsorship with Crayola through her project and also won the AARP Inclusive Design Award Prize for $5,000, one of six sponsored prizes awarded in cash or mentorship and production help Wednesday evening.

As for the other prizes, The H&M Social Impact Award went to Doyeon Yoni Yu; the Yooxygen Award, valued at $50,000 went to Marissa Petteruti; the Bandier Design Prize for $5,000 went to Kayla Conklin with Colene Yap and Petteruti as runners-up; the Solstiss Prize went to Christina Rizzo; AARP went to Simon with Dominique Flaksberg, Claudia Poh, Amy Yu Chen and Chaewon Kim as runners up, and the Hugo Boss Circular Design prize for $20,000 went to Jose Luis Cabrera, Gwen Ong and Annabella Waszkiewicz.

Parsons The New School of Design