Sustainability Stole the Spotlight at WSM

The two-day trade show, that closed on Jan. 12, showcased sustainable fashion in more ways than one, including panels and workshops.

The scene at the WSM trade fair in January.

MILAN — With a new location, a focus on sustainability, running one day less for the first time, the contemporary ready-to-wear and accessories trade show WSM presented 80 brands, all offered a standardized booth to foster inclusivity and invited without being charged a participation fee.

Massimiliano Bizzi, founder and president of White Milano, the WSM organizer, firmly endorsed the new strategy this season as he aimed to spotlight environmentally conscious practices in fashion, moving past the streetwear and sportswear categories that the WSM format had targeted in the past. Bizzi tapped Matteo Ward, a sustainability expert and cofounder of the eco-friendly label Wråd, as artistic director, who conceived the new concept of the show.

As in previous seasons, however, the two-day event that closed here on Jan. 12, blended the business-to-business and business-to-consumer platforms, drawing more than 4,000 visitors, although a comparison with a year ago is not meaningful given the new format.

WSM was turned into a nonprofit event, with the support of the Ministries of Economic Development and Foreign Affairs, in addition to Italy’s trade agency ICE and local association Confartigianato Imprese. “The trade show thus becomes a collaboration between stakeholders,” explained Ward. “It’s a disruptive format that we’re bringing to Italy and Europe, one that I haven’t seen elsewhere,” he said.

Bizzi described the revamp of the fair format as a daring move as “buyers still don’t really understand the impact that green fashion will have on their businesses,” driven by knowledgeable customers, especially from the Asian continent.

But WSM was also intended to raise awareness among consumers as Ward noted that for instance 80 percent of Italian consumers look for traceable products but only 20 percent actually buy into the category.

Welcoming visitors at the Base venue, a former locomotive plant, the Museo Salvatore Ferragamo and Fondazione Ferragamo brought a display of Salvatore Ferragamo’s “Sustainable Thinking” exhibit, which pays tribute to the late designer’s innovative styles and research into materials in the Twenties, including hemp, cellophane and fish skin, while underscoring the brand’s more recent experiments with environmentally friendly materials. “We have to recover the common sense in design, which was pivotal in fashion already 100 years ago,” said Ward describing Ferragamo as a visionary creator.

Underscoring the importance of training young designers to approach the industry with a green ethos, WSM also invited representatives of international universities and schools that offer courses focused on sustainability across different disciplines, such as design, the arts, medicine and technology. The Interaction Hub space hosted, among others, the Politecnico di Milano University. Hakan Karaosman, professor of sustainable fashion and supply management at the Milan-based university, said the initiative was aimed at “highlighting different pillars, including sustainable education, with competitors coming together to underscore that the issue is complex and that fashion should look beyond design and supply, to the circular economy,” he said.

A number of panels on green fashion as well as workshops with emerging designers completed the event’s schedule. They included seminars with Patrick McDowell teaching how to embellish clothes with upcycled Swarovski crystals; Larissa von Planta, who breathed new life into damaged and out-of-fashion clothes; Helen Kirkum, who created key rings from recycled sneakers’ components and Corrina Goutos, teaching how to transform earbuds into arty earrings.

Despite such a busy schedule, fashion collections — all incorporating a sustainable message — managed to steal the spotlight, with exhibitors that were generally upbeat about the trade show’s new format. 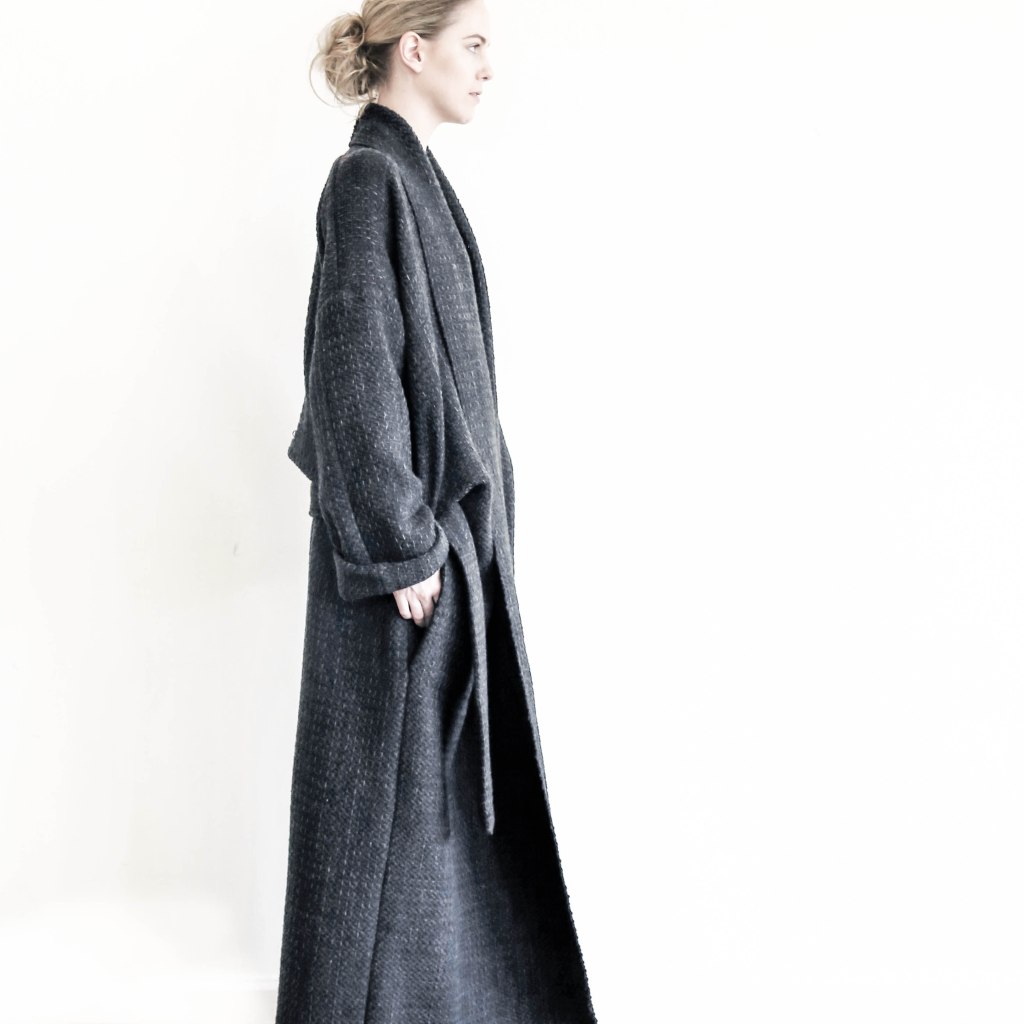 Vegan Tiger was founded in 2015 by designer Yoona Yang who dreamed of “debuting the first South Korean vegan brand.” Employing TK Chemical’s Jurasil polyester that contains raw materials extracted from the plants, the collection avoids animal-derived materials. In keeping with the brand’s pop and colorful aesthetics, tunic dresses and faux fur coats were splashed with camp ghost characters that referenced the animals exploited by the fur industry, Yang explained. A jacquard sweater with the same motif also featured the “My Fur, Not Yours” claim, further pushing through the vegan message. In February, Vegan Tiger will be headed to New York to host a runway show during the city’s fashion week. 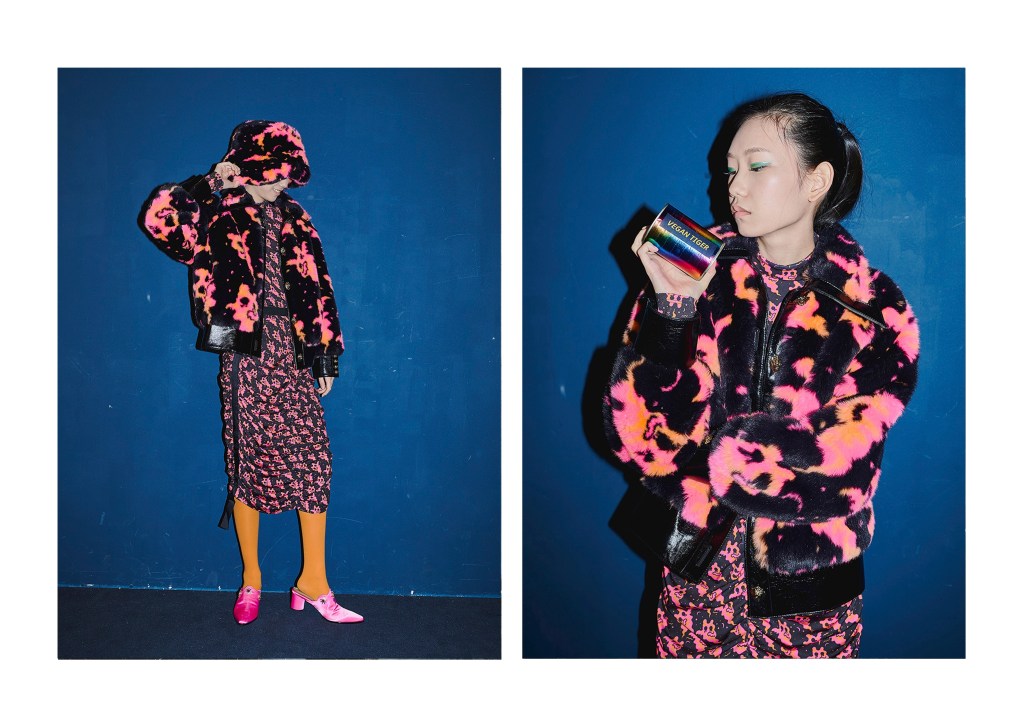 Italian handbag brand BGBL took the circular economy route, crafting bags from discarded basketballs that are collected from basketball teams in exchange for new ones. Founder and designer Elisabetta Viola said the idea was triggered by a design school’s course on circularity. “In addition to recycling, the bags really tell the story of the ball, the teams that used it and the games,” Viola noted. Produced in Treviso and Padua, in the Veneto region, the playful styles (satchels, backpacks and minaudière) incorporated certified leather from local suppliers with the balls, often used as the bases for the bags. The company recently collaborated with basket freestyle collective Da Move, developing bags with balls they used for special performances that will be auctioned off for charity. 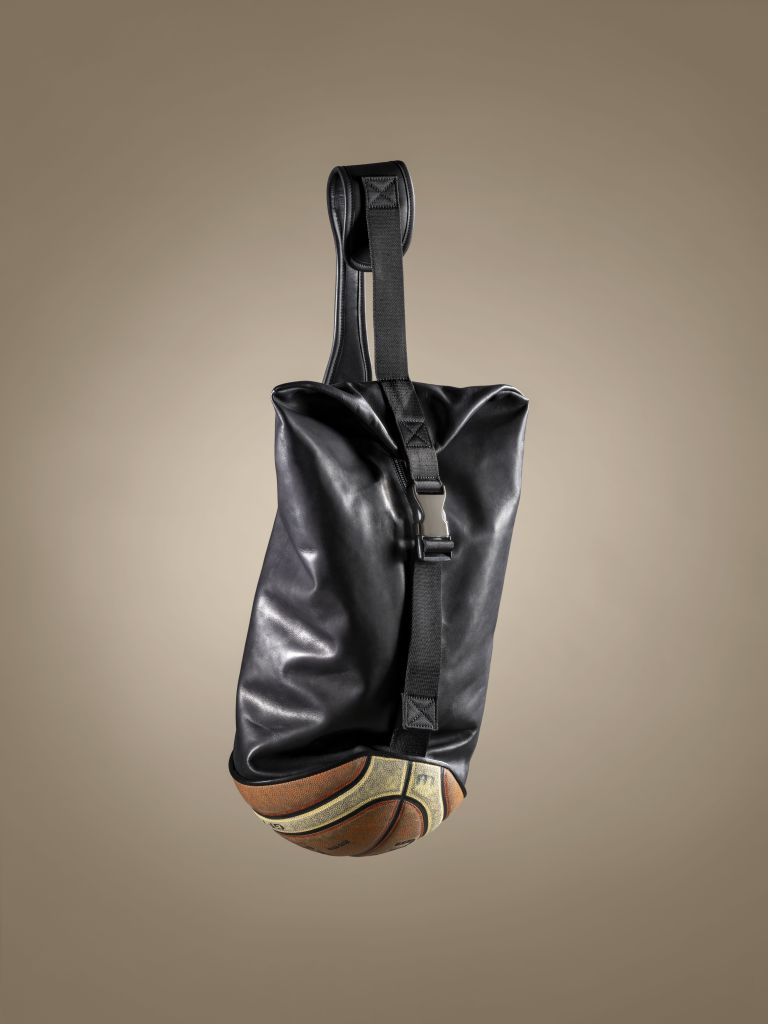 A bag from BGBL.  Courtesy Photo.

A different take on sustainability was key to Iranian-Italian brand A2 By Matin, founded in 2016 by siblings Anahita and Aida Matin. Intended to promote social responsibility, the brand is “proudly Made in Tehran, with the aim to support local tailors and women in our country,” explained Anahita. “There’s a whole movement of young people in Tehran fighting for a cultural renaissance of the country, including the way fashion is perceived,” she added. A feminine-masculine dichotomy is core to the brand’s style, in which mannish suits and off-the-shoulder jackets with peplum sleeves are crafted from men’s wear fabrics, sourced from stockists’ leftovers. Nodding to the brand’s roots, carpet motifs embellished a genderless Korean-style jacket, while Iranian phrases popped up on colorful knitwear pieces. 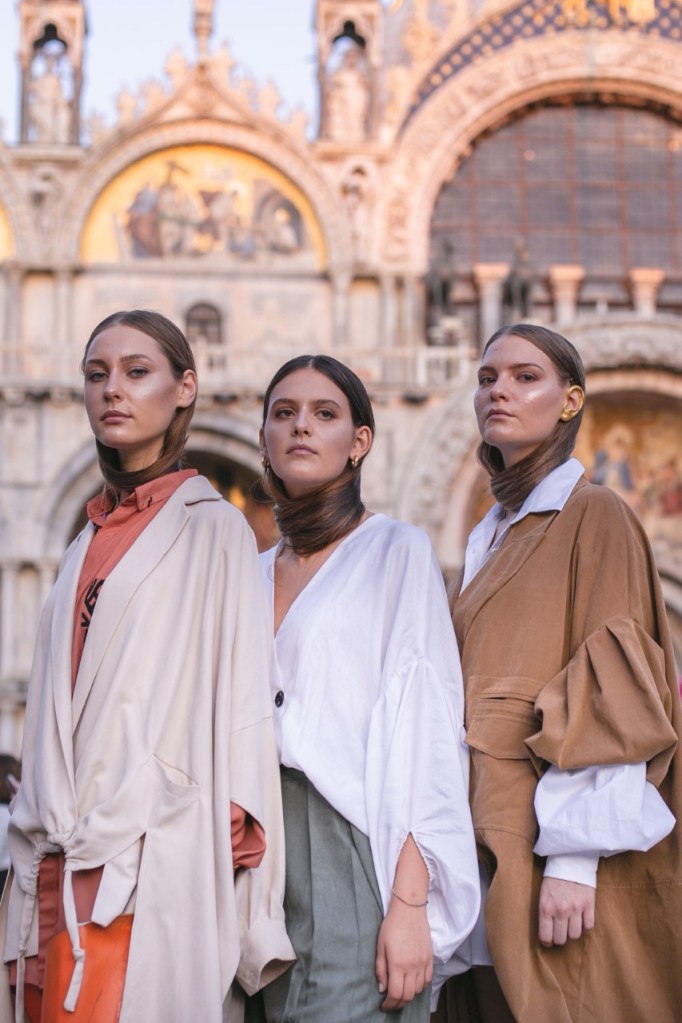 Looks from A2 By Matin’s latest collection.  Courtesy Photo.