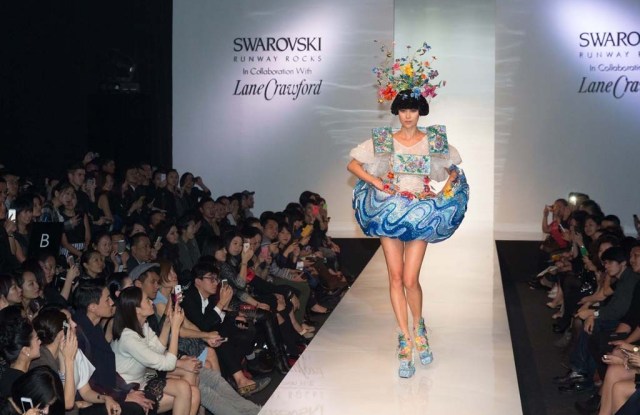 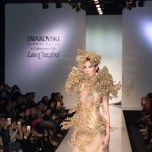 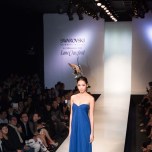 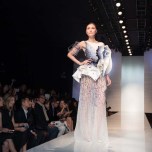 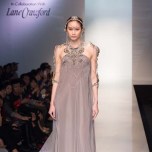 SHANGHAI — Swarovski is upping its bling factor in Asia.

The crystal producer held its first Runway Rocks exhibit and fashion show on Thursday in Shanghai. The show and exhibition featured specially commissioned pieces from nine regional and international designers. The designers incorporated crystals and gems from Swarovski to create elaborate designs that mixed art with haute couture. There was a Native American headdress with turquoise crystals; a motorcycle helmet covered in an array of multicolored stones, and a couture dress encased in sculpted metal, crystals and feathers meant to personify the Greek mythological bird, the Phoenix.

Chinese designers included Guo Pei, who is considered the country’s preeminent haute couture and wedding dress designer, as well as Wang Peiyi, winner of the second edition of the Mercedes-Benz China Young Fashion Award, whose collection made its debut at Milan Fashion Week in February. The Asia-Pacific commissions joined new pieces by designer Giles, as well as jewelers Stephen Webster and Ted Noten. Other Chinese designers included Masha Ma and Huishan Zhang.

Guo said she has been working with Swarovski for about two decades. Her commissioned piece was a blue crystallized tutu shaped like a boat with matching headdress and platform ballet slippers. Guo said that while Swarovski has enormous brand recognition in China, she increasingly has customers seeking bespoke designs with more understated elements.

“Swarovski entered the Chinese market at the right time,” Guo said. “Budding designers have received a lot of support from Swarovski, but when I deal with my own clients, I don’t recommend Swarovski in all cases. Some are government officials or business people. They are low profile, and don’t like to show off.”

Runway Rocks was held at Lane Crawford’s Shanghai flagship, which opened in October. Swarovski has about 600 stores of its own in the region out of a total of more than 2,000 worldwide.