Buyers at AmericasMart bought new proportions for fall, holiday and early spring, predicting that the looks would propel sales. 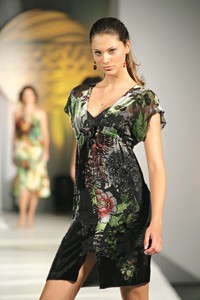 Long sweaters with neckline interest and dolman sleeves were paired with slim pants or leggings. Novelty skirts, with more subtle embellishment than recent seasons, were strong in asymmetrical hems and all lengths. The new shapes have generated more interest in belts, though these are more subtle than the Western-influenced flashy styles of past seasons.

Officials said total attendance at the women’s and children’s apparel and accessories market, which ran June 8-12 at AmericasMart, increased slightly compared with last June, boosted by new stores in the Southeast. Exhibitors reported erratic traffic but solid orders, with retailers confident after a good spring.

Betsy Foster of M.S. McClellan for Women, a Knoxville, Tenn., specialty store, shopped with a budget that was up 10 to 20 percent for soft dressy knits, sweaters, blouses and skirts, mostly for holiday.

Carefully editing trends, Foster passed on leggings and Empire waistlines, but she did buy dolman-sleeve cashmere sweaters from Magaschoni and White & Warren, in “pretty colors that appeal to Southern women,” she said. She also opted for camisoles and shells from Anue.

Bonnie White, owner of two Atlanta specialty stores under her name, shopped for holiday with a bigger budget, but was disappointed with the market’s lack of focus on the season.

“It’s an important time of year, when people are out shopping, but I’ve had to really dig to find the right product,” she said. “It’s silly to bring cotton sweaters in the store in January when it’s so cold outside.”

Concentrating on knits, for their versatility and appeal to her customers who travel, White bought five sweaters to every bottom. From oversized dolman-sleeved, V-neck and cowlneck silhouettes to raw-edged cashmere cardigans and sweater jackets, she bought sweaters as a sure sell.

“Sweaters have been close to the body for so long. This is a new, flattering proportion that makes women look slimmer,” she said.

She paired sweaters by Cullen, White & Warren and Emma with slimmer-leg pants and black and brown leggings from Fabrizio Gianni, Votre Nom and Spanx.

Florida retailer Dianne Gates, manager of Four Seasons/The Village Jeweler, in Gainesville, shopped with a budget that was 30 percent higher after several seasons of cautious buying because of hurricane fatigue in her state.

“We’re seeing a resurgence in business now, but we’re watching numbers and buying deeper in the vendors that are performing,” she said.

In accessories, she ordered belts from Suzie Roher and Brighton.

“Brighton has good sales, good turns — and they service their accounts,” she said. “Today, that’s everything we specialty stores want in a line.”

Contemporary, ageless dressing with a California Casual concept was the goal of Bill Alverson, owner of Uptown Girls, a clothing boutique and skin care salon in Andalusia, Ala.

With a recent downtown restoration, new roads and development extending from the nearby Florida panhandle, Alverson said southern Alabama is ripe for his contemporary concept. Alverson bought junior contemporary sportswear from Karlie and Tulle and T-shirts by Michael Stars and James Perse.