Swim Report: Banking on Color for a Turnaround 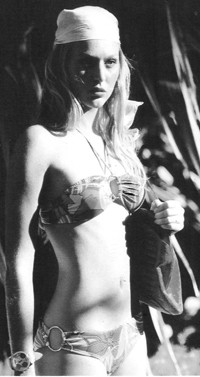 NEW YORK — It might be a tough sell at the London School of Economics, but consumers’ recent interest in vibrant, printed swimwear signals an economic rebound to some swimwear makers.

“There is a lot of life again in the economy and people are feeling happy,” said designer Lisa Curran. “The swim business is doing really well right now. I have just shipped and I am already getting a lot of reorders.

A paparazzi shot of Britney Spears in Hawaii wearing a Shoshanna white bikini imprinted with multicolored hearts has renewed consumer and retail interest in that motif, said designer Shoshanna Lonstein. The company is receiving between 15 to 20 phone calls daily since the photo first ran a few weeks back. It is still being picked up by various magazines and tabloids.

Unfortunately, the suit they are requesting was part of last year’s collection, but other heart-pattern suits are being offered this year.

Even without the unofficial celebrity endorsement, swimwear has picked up speed thanks to interest from designers like Stella McCartney, Lonstein said.

“Suits have become so much more part of the fashion game,” she said. “There are so many options and sizes. It used to be more of a missy or Op look. Now there are so many people doing fashion.”

Having spent the holidays in the West Indies, David Chu, president, chief executive officer and design director of Nautica, said people are embracing swimwear as more of a lifestyle look, due to the multitude of options. They are mixing sarongs, accessories, cover-ups, and mesh pieces.

“They are incorporating a lot of looks,” he said. “There is a huge amount of options out there.”

Nautica is cashing in on that by opening concept stores and will continue to do so this year, Chu said.

Fresh from a trip to Europe, Patricia Ratut, director of U.S. operations for Manuel Canovas, has also “definitely seen a greater sophistication in high-end swimwear.”

“There’s a tendency to go back to more couture swimwear and more intricate shapes,” she said. “People are getting bolder and more daring, which is good. Prints are definitely hot. It’s not about solids any more.”

That trend suits Canovas, which has built a following for its bright, patterned suits. Last year, the company’s sales increased 20 percent and it opened its second freestanding store in the Bahamas.

European department store buyers told Ratut that the trend is toward feminine styles that show the body “without being outrageously exposed,” she said.

Irene Leroux, founder and designer of the 35-year-old Eres brand, is focusing on bright colors such as turquoise, maroon and dark green.

“The look is sexy, sophisticated and cheerful,” said Leroux. “It harkens back to the Sixties.”

Prints include polka dots and a special leaf motif look that is three-dimensional, said Leroux. She has also used black rings on straps and bandeau tops, a look that is also Mod-inspired.

Eres, a division of Chanel that now has eight freestanding stores, continues to grow in Japan, where it recently opened 10 in-store shops.

Curran said her newest signature collection is inspired by such typical summer themes and activities as outdoor barbeques and citrus fruits.

“I have watermelon prints and lots of color,” said Curran, who designs her own prints. “It’s a very fruity, flowery season.”

Curran, who sells primarily to specialty stores, noted swimwear is now bought year-round and is not as much of a seasonal business. She also observed that there are a lot more smaller designers entering the swim market and that the field is more crowded than ever.

“There is more competition now,” she said. “But it’s not only about the big branded names. If you have a product that sells, that is the bottom line.”

In terms of trends, Rubin of Mainstream said women are interested in halter and surplice tops. Separates, which have become a mainstay in the junior business in recent years, are “growing by leaps and bounds” in the misses’ category, Rubin said.

From a sourcing standpoint, manufacturers have more pressure than ever to reduce wholesale prices and provide better margins to retailers. “The only way to do that is through better sourcing,” Rubin said.

Each year, more companies are shifting production to Mexico, Canada, the Caribbean and even the Orient, whereas that was not the case four years ago, he said. But department stores aren’t the only major retailers indirectly triggering that shift. Target, Wal-Mart, Kohl’s and J.C. Penney are also causing the move, Rubin said.

“As a category, swimwear may not be an overall growth category [in terms of overall dollars],” he said. “If a certain retailer or manufacturer is doing well, it’s because they’re doing a better job with styling, pricing or sourcing. Everyone is eating some of everybody else’s lunch.”

Water Girl is banking on halter tops and low-rise bottoms reminiscent of Ursula Andress’ bikinis in the James Bond flick “Dr. No.” That combo was a hit for the brand last year and it aims to build on that momentum by offering a greater variety, such as halters with a band underneath, piping or a soft-tie look, said Alison Cutler, marketing manager for Water Girl, a label popular with surfers.

“It’s almost that Seventies look,” she said. “In our world, it means more coverage on the bottom and a nice supportive top. Functionally, it works well.”

Letarte swimwear is counting on skimpier looks to sell, since its mid-coverage bikini is the current bestseller for 2004, said Michele Ross, who owns the company with her sister, Lisa Cabrinha.

“Women are more comfortable with less coverage, especially in the Northeast,” Ross said.

Having one of its body-bearing bikinis in Bergdorf Goodman’s resort and holiday catalogue has helped the brand sell “several hundred” units of the style. Ross worked the store’s sales floor one weekend in November and another in December. She said, “It’s all about sales associates helping the customer. It’s probably the most difficult purchase a woman makes.”

Hardworking, knowledgeable sales associates at Jerrie Shop and Soleil Toile have helped make those stores among Letarte’s top accounts. They have no qualms about helping customers in the dressing rooms, by sizing up the suits and offering other options for shoppers’ body types, Ross said. Letarte also has at least 10 trunk shows planned for this year.

Rebequinha Inc., a two-year-old firm based in New York, is concentrating on mixing separates such as a plain top with a patterned bottom and using embellishments like beads, ribbons and crystals. Co-owner Hilary Semel said she is optimistic about this year’s business, since the category has been getting more attention in the media and popular culture. Brazilian models and Victoria’s Secret have made women more comfortable with their bodies and with buying swimwear, she added.

With the Summer Olympic Games set for Athens in August, Speedo is making a major push around the Olympics. The company typically sees a 10 percent upswing in sales during an Olympic year, said Craig Brommers, vice president of marketing. This spring, the company will unveil its latest advancement for AquaBlade, a line of aerodynamically designed, $300 full-length swimsuits. That suit will bow in stores at the same time Olympic athletes are competing for medals.

“We’re also trying to bridge the gap between the racing market and the fashion beach collection,” Brommers said. “When our athletes make myriad appearances, they will wear our activewear, bikinis and beachwear to tell a more complete brand story.”

With consumers showing interest in bright designs and bold colors, Speedo is tying into that trend by introducing a “beach life” collection and Lifeguard, a junior-inspired collection, Brommers added.

Others are also getting into the junior business.

Christina America, a subsidiary of Swim Exports Alliance, or SEA, has signed a deal to produce the licensed Skechers Beach collection. It will be introduced in July at the Miami swim show. Griselda Espino has joined the company from Authentic Fitness, where she was a junior swim designer.

Kathy Van Ness, president of the designer division at Authentic Fitness, is more focused on fresh colors. “Pink is it, no question,” she said. “It’s happening on all levels — bubblegum, shell pink, mixed with black.”

Pink’s popularity is another example of how the swimwear market is more in line with sportswear trends, she said. Interest in Marilyn Monroe-inspired tops and cargo bottoms also supports that notion, Van Ness said.

“People are looking for a more put-together look,” she added. “It goes back to the retro trend where people looked more put together.”