By Georgia Lee and Rebecca Kleinman on July 24, 2006
View Slideshow 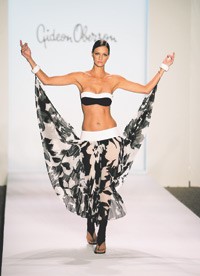 At both SwimShow2007 and Sunglass Hut Swim Shows Miami, the seamless connection between fashion and swimwear was apparent. Swimwear vendors, such as Jantzen and Speedo, are expanding cover-up lines, not only with traditional pareos and sarongs, but also with fully developed sportswear collections and dresses that stand alone and go beyond the beach. Fashion designers, including Michael Kors and Betsey Johnson, are adapting their signature styles into swimwear.

Ready-to-wear trends are fully integrated into swimwear. Prints made a statement this season, from edgy animated or graffiti to vintage conversational resort scenes layered over tropical backgrounds or topped with foil overlay treatments.

Reflecting sportswear silhouettes, the newest swimwear shape is the longer tankini, such as Michael Kors’ gathered suit that can be lengthened and instantly transformed into a minidress. While bikinis are still number one, other shapes, such as one-pieces, monokinis and cutouts, are emerging as popular with younger customers who may have never worn them, exhibitors said.

Hardware trims such as D-and O-rings in silver and gold continued to be strong, along with full metallic suits or metallic trims, in gold, silver or copper. Brown, last year’s dominant color, continues with pastel blue, green and pink, but navy emerged as the newest color, along with a range of blues and greens.

Ethnic, multicultural trends were big in dramatic Spanish, Mexican and African interpretations that incorporate embroidery, braiding or crochet in green, black, orange and red shades, adding light natural embellishment of horn, shells or beads. Nautical was a big trend, in crisp navy, red, black and white, with stripes and hardware details or feminized with ruffles and bows.

For the second year, SwimShow 2007, sponsored by the Swimwear Association of Florida, and Sunglass Hut Swim Shows Miami, presented by Lycra and produced by IMG Fashion, ran together, from July 15-19.

“Moving the show to the beach [after a long run at the Radisson Mart Center] has made this a destination and attracted more buyers,” said Judy Stein, SwimShow executive show director, who reported that buyer traffic was up 21 percent over last year.

Swim Shows Miami staged nightly presentations in poolside tents at the Raleigh Hotel. Along with shows spotlighting individual designers, such as Red Carter, Gideon Oberson and Becca, the events included a collective presentation of 30 designers to celebrate the bikini’s 60th anniversary. Most of the shows had after parties at local nightspots that lasted into morning.

“A $90 swimsuit can be shocking, so consumers must understand more design and technology goes into this product than a T-shirt,” said Sowell, as she displayed chlorine-saturated Xtra Life Lycra suits tested in average pool conditions that last five to 10 times longer than unprotected spandex.

Higher elasticity is woven directly into fibers as the company’s “no bag and sag” policy replaces weaker fabrics with the high-tech Lycra.

Fern Mallis, vice president and executive director of IMG, which also sponsors the 7th on Sixth runway shows in New York, said swimwear and fashion are becoming increasingly intertwined, and resortwear is more in demand. Mallis said the event is generating more widespread attention, being broadcast by satellite through IMG’s media outlets.

Specialty swimwear stores and chains, reporting strong sales, shopped with expanded budgets for high-end swimwear and more cover-ups than ever.

Buying for a wide range of customers, Ann Tucker, president of Everything But Water, an Orlando, Fla.-based swimwear chain with 34 stores nationwide, focused on high-end lines.

“We’re looking for the best,” she said, adding that her customer is not resistant to retail prices of more than $100. “Our customer comes to us for quality, service, selection. For something so personal, they love direction.”

Tucker succeeded founder Stacey Siegel, who retired when Bear Growth Capital Partners, an arm of Bear Stearns, bought the business in April. Leading a buying team in place before the acquisition, Tucker bought separates, which are now more than half of inventory, across most categories.

For designer and contemporary categories, she purchased glamorous, retro looks, with draping and ruching, in jewel tones, brown and greens, and nautical looks with an edgy pirate twist in skull-and-crossbones details.

“For newness and freshness, my favorite line was Red Carter,” she said. “I loved it all and will buy it.”

In a departure from heavy embellishment of last season, Tucker concentrated on classic silhouettes, including high-waist, boy-leg, skirted, over-the-shoulder and underwire bras, and bought more cover-ups, encouraging customers to wear them beyond swimwear venues.

Focusing on a 25- to 55-year-old core customer base has resulted in double-digit sales gains this year for Water Water Everywhere, a 20-store specialty swim chain based in Owings Mills, Md., said Bridget Stickline, director of fashion merchandising, who shopped the show to strengthen vendor relationships and look for new talent.

“Our core customer is hungry for sexy looks and solutions,” she said. “As an industry, we’ve concentrated too much on just educating consumers on fit solutions, and not enough on fit and fashion and how it can work for them.”

Stickline bought glamorous silhouettes with ruching and draping and ties, dots and bows. She ordered looks with subtle embellishment and tankinis from Michael Kors, colorful pieces from Anne Cole, paisley prints by Lauren and various looks by her best-selling resource, La Blanca.

Heather Taylor, owner of A Tropical Affair, a swim and lingerie store in Santa Barbara, Calif., shopped for “sexy swimsuits in clean, sophisticated silhouettes,” she said.

“On the West Coast, customers from age 12 to 65 want skimpier suits, whether it’s bikinis or one-piece suits with scandalous cutouts,” she said. “We have more requests for tie-sides, bandeaux and uncomplicated suits that don’t create tan lines.”

Taylor bought suits with subtle gold hardware or bamboo rings. For her wealthy clientele, she bought high-end designer lines, including Trina Turk, Shan and Karla Colletto. In cover-ups, she ordered fashion trends, such as Empire-waist dresses and tunics, from Milly and Letarte.

International buyers, especially from the U.K., shopped for a range of U.S., European and Australian lines.

King’s Road Sporting Club, a high-end swimwear boutique in London, sells $100,000 worth of product a week, with 35 swimwear lines, said David Conitzer, buying director, who shopped the Miami show for high-end designer lines that do reorders for fast turnovers.