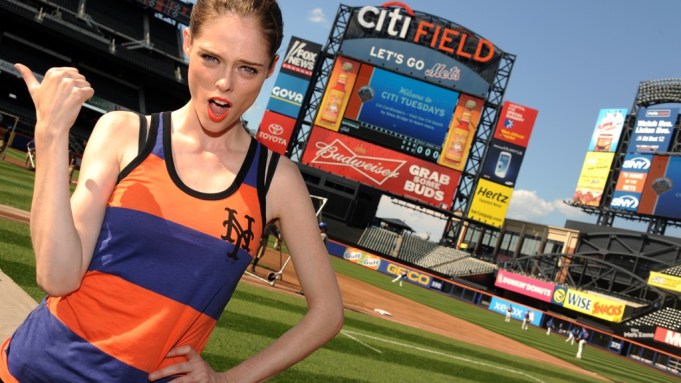 Anyone familiar with the Council of Fashion Designers of America knows that the organization does not miss an opportunity to celebrate — there’s always an excuse for a party and maybe a photo op or two. Still, when invitations circulated for CFDA day at Citi Field for Tuesday’s Mets game, it seemed out there. Baseball? In Queens? It’s not exactly the Bronx. As it turns out, the CFDA is celebrating its 50th anniversary, and so are the Mets — a coincidence turned commercial opportunity in the hands of Jessica Wilpon Kamel, who co-owns the company Edition01 and whose uncle Fred Wilpon is the majority owner of the Mets.

Wilpon Kamel enlisted Billy Reid, Yigal Azrouël, Loomstate and Shipley & Halmos to design limited-edition Mets merch — mostly T-shirts and a zip-up track jacket by Reid — available on edition01.com. “I’ve always wanted to do something so that I could be involved somehow [with the Mets],” Wilpon Kamel said. “My brother helped bring all these new restaurants to the stadium. I thought this project would be a great way to bring New York fashion to the stadium as well.”

Among those who made the trek to Queens were Adrienne Landau, the CFDA’s Steven Kolb, Vena Cava’s Lisa Mayock and her husband Jeff Halmos of Shipley & Halmos, Melissa Joy Manning, Dana Lorenz, Sandy Dalal and Ron Chereskin.

A quick poll of the fashion crowd indicated that most knew little about baseball, the exception being Reid, who coaches his eight-year-old son’s Little League team in Florence, Ala. “All the team names are after the professional teams, and crazy enough, our team was the Mets,” he said. “So when we got the call about doing the project I was like, ‘There’s an omen.’”

Several attendees, including Coco Rocha, admitted they had never actually been to a professional baseball game before. Getting to watch their first from the owners’ Sterling Suite was not a bad way to start. “I got to meet all the players, so I am definitely a lucky fan,” said Rocha, who handled a bat like a pro to pose for pictures on the field pregame. Asked if she would wear her Loomstate Mets shirt again, she shrugged. “I don’t know,” she said. “I have to see if I am a Mets fan by the end of the game.”

Maybe not: The home team — and its famed knuckleballer R.A. Dickey — lost to the Washington Nationals, 5-2.