Swinging to the Music at Sarabande

Designers Danxia Liu and Shanpeng Huang of Danshan at their Sarabande studio.

LONDON — Beyond the runway, the presentation venue, the showroom and the shop floor there is a safe space, a fashion laboratory where designers can exhale, experiment, fail, succeed and run wild, within reason.

That laboratory is Sarabande, Lee Alexander McQueen’s charitable arts foundation based in Northeast London that offers fine artists and fashion designers residencies where they’re meant to define their vision, figure out what they stand for, and how they can make it in a city — and in industries — that are expensive and brutally competitive.

Sarabande also plugs a gap left open by the big fashion colleges, offering support on how to start — and maintain — a healthy business. Named after McQueen’s 2007 spring collection, Sarabande provides scholarships to students at graduate and postgraduate level, and houses small, subsidized studios at its headquarters in London’s Haggerston.

Much of that advice comes from Sarabande’s chief executive officer Trino Verkade, inquisitor, accountant, strategist, dealmaker, devil’s advocate — and confidante — of the artists and designers. The former managing director of Alexander McQueen, the straight-talking Verkade has held top management positions at brands including Thom Browne Inc. and Mary Katrantzou. 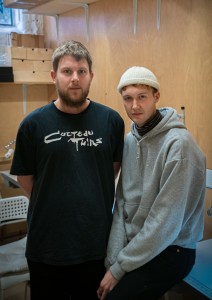 Craig Green is a Sarabande alumnus, as is John Alexander Skelton and Katie Roberts-Wood of Roberts Wood. All three worked from the small and sunny studio spaces at Sarabande before making room for the next crop of creators. All three are stocked at another great supporter of new talent, London’s Dover Street Market.

Currently in residency at Sarabande are the men’s wear labels Danshan and Stefan Cooke. Danshan will show at Pitti Uomo once again come January, while Stefan Cooke has a runway show planned during London Fashion Week Men’s on Jan. 5. 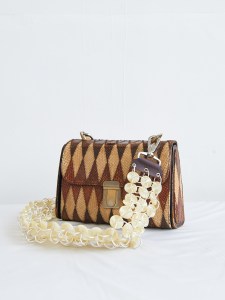 Skelton, who last year made the leap from Sarabande to his own studio on Poland Street in London’s Soho, will also show on Jan. 5, at Zabludowicz Collection in Camden.

Skelton, a Central Saint Martins graduate and winner of the L’Oréal Prize for his 2016 graduate show, said Verkade’s business expertise helped him to strike out on his own.

“That is the thing that you don’t get taught in fashion school,” said the designer, who works with weavers and mills across England and whose collections are inspired by 19th-century men’s wear.

“I had worked in a few places before, but it is still quite difficult to get a grasp of the ins and outs of wholesale, and having to get trademarks and lots of technical things like shipping to stores. It is a bit of a minefield. If I didn’t have Sarabande, I would have been at a loss. Every time I had an issue, Trino would push me to push my business further, to have everything organized and a good idea of where I wanted to be, and the kind of places that I wanted to sell to. Even now, every time I have an issue I can call her.”

Skelton’s brand sells across all of the Dover Street Markets, and at stores including Darklands in Berlin and Song in Vienna. His upcoming men’s collection is based on the 1954 Dylan Thomas play “Under Milk Wood,” and the “really ordinary, banal clothes” that artists from the era transformed into unique looks. 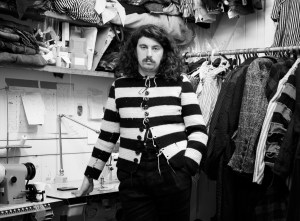 The breadth of talent, craft and skill at Sarabande, where residencies last for 12 months, and sometimes longer, cannot be underestimated.

In addition to fashion designers, there are artist-artisans such as Jimmy Junichi Sugiura, whose sculptural shoes are inspired by antique footwear and whose complex, fantastical designs look like something a sci-fi princess would wear for a big night out.

He shares studio space with Akiko Shinzato, a conceptual jewelry artist whose designs are more akin to Venetian masks, in that they can disguise and transform the body, shading the eyes, the tips of the nose or snaking around arms and necks. They’re wearable sculpture more than anything.

Shinzato was the winner of the Swarovski Design Project in 2015, and her piece went on display at the Victoria and Albert Museum during the Alexander McQueen exhibition “Savage Beauty.” Shinzato’s pieces were also shown at the Vicenza Museum of Jewelry.

Paloma Tendero is also in residence at Sarabande: A visual artist who examines the ramifications of inherited DNA, she creates flat and 3-D images of what the insides of the body look like in her mind’s eye. She overlays those images and 3-D creations onto her naked body and then takes self-portraits that look like artistic, abstract X-rays. Her artwork is part of The Hyman Collection and she has been selected to take part of a peer group at The Photographers’ Gallery in London. 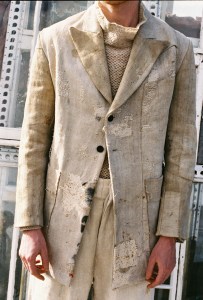 Jake Burt, who codesigns the Stefan Cooke collection, said working at Sarabande has helped him and Cooke to focus, plan and prioritize. Although Stefan Cooke will be showing during London Men’s, Burt said he realizes the runway isn’t the holy grail.

“I want to continue doing shows, but they’re just so clearly not the most important part of this industry. From our first show, we got into really good stores and then we just grew in sales. It’s made us realize that it’s more important to work with the stores than to worry about the show. Production is way more important than the show, too,” he said during an interview from the duo’s Sarabande studio.

The young brand already has a big following in Japan and a deal with Matchesfashion.com to sell restored and reworked vintage handbags, which they produce in limited numbers. The last batch sold out in less than 24 hours. Burt added: “Reviews are one thing, but when you see people really thinking about buying the clothes and wearing them, that is the most exciting thing.”

Good craftsmanship and attention to detail will take center stage this season, Burt said. “The most subversive thing you can do these days is finish something really well. If you can get an idea across and finish your product really well, I think that is the coolest thing,” he said.

The London-based men’s wear brand Danshan, which is named after the designers Danxia Liu and Shanpeng Huang, is wrapping up its last few months at Sarabande.

The two graduated from Central Saint Martins in 2012 and launched their brand in 2016. January will mark their second season at Pitti Uomo.

In an interview, Liu said being around other creatives at Sarabande exerts a powerful force. 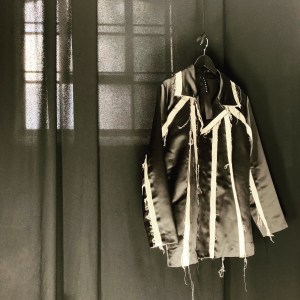 “The space has a very strong creative energy and whatever questions or difficulties we have, we just go and knock on anyone’s door and there is a sense of support. Integrity is so important here: I feel like if I want to say something, I have to know what I am talking about. You really need to know your stuff,” she said.

Verkade knocks on her door every day, Liu added, and “sometimes she just asks little questions, and really makes me think about my products and my strategy. Shan and I have lots of conversations ourselves and we always have to answer externally to Sarabande. That process really clears our heads.”

The duo’s fall 2020 collection, filled with padded fabrics, satin and chiffon, continues the designers’ narrative of the sensitive man.

“Our brand is always about celebrating male vulnerability and encouraging men to reclaim their sensitivity, and if you touch the fabrics, everything is very tactile,” she said.