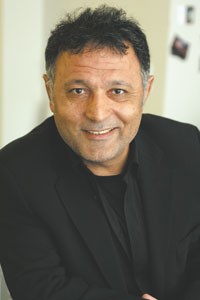 NEW YORK — Elie Tahari is taking on the world — fashion-wise and geographically.

Tahari is out to build a $1 billion brand over the next five years and for fall will launch both a major accessories push and a men’s wear line. At the same time, he’s growing his network of freestanding stores with a new retail concept, expanding into international markets such as Europe and Asia and upgrading parts of his collection to hit higher price points.

To support the growth, Tahari also will launch his first global advertising campaign this spring, which was photographed by Glen Luchford and features model Missy Rayder.

Sitting in his sprawling office facing Bryant Park on West 42nd Street, Tahari, chairman and chief executive officer, and his wife, Rory, who is the label’s creative director, said the timing was right to make the leap.

In 2003, Tahari sold his stake in Theory, which he launched with Andrew Rosen in 1997, to Link International and Fast Retailing Co., and found himself with sufficient cash to reinvest. His 2004 attempt to buy Barneys New York didn’t happen, but Tahari is now using some of that money to expand his own label, which is sold in more than 600 doors worldwide, including Neiman Marcus, Bergdorf Goodman, Saks Fifth Avenue, Bloomingdale’s, Nordstrom and Macy’s West.

“I always intended to make the highest-quality designer product, but I didn’t have the financial resources or the right connections to accomplish this,” Elie Tahari said. “Since we sold Theory, we had the financial resources. I also had the extra time to devote myself to these expansions and now we feel we’re doing it right. In the last two years, we have been investing in the product and this is only the start.”

Department and specialty stores regularly cite the collection as one of the top sellers in the bridge area, where it is often positioned as a segue to the contemporary designers. According to Tahari, the label had wholesale sales of $500 million, which he explained was a good platform for future growth.

Within five years, Tahari plans to be a $1 billion company. Much of this growth is expected to come from the addition of the lucrative accessories categories, as well as the brand’s growing network of signature stores.

For fall, he is launching about 50 styles of shoes and 23 handbags, which echo many of the luxurious details that he has been incorporating into his sportswear. The shoes, for instance, are full of special touches inspired by antiques, such as Victorian pocket watches and decorative Jugendstil elements. One style features fine metal filigree work on the toe, which emulates lace embellishes, while another features a striated metal accent on its front.

Specially developed leather stamp work appears throughout the footwear, either bordering an undersole, scrolling up a heel or decorating the sides of a platform. The Forties- and Fifties-inspired silhouettes, including flats, strappy high heels, round-toed platform pumps and knee-high boots, appear in jewel tones like midnight blue, wine, camel and black. Materials include velvet, patent leather, silk moire, suede, leather and exotic skins like crocodile, python and a rare ring lizard.

One shoe is designed in a wool and metal brocade, specially developed for the line. The footwear has suggested retail prices of $350 to $750, with some styles climbing as high as $2,000.

Tahari didn’t want the aesthetics to reign over comfort, however. For the shoes, he developed custom lasts to ensure proper foot balance. He also added cushions to cradle the ball of the foot. To enhance practicality, some shoes even feature a protective, nonslip rubber patch hand-stitched to the sole.

“I don’t wear shoes unless I’m comfortable and I think women are getting smart and thinking this way as well,” Tahari said. “They want comfort and practicality along with beauty.”

The handbag collection features custom-developed hardware and materials such as soft Italian leathers, crocodile, sheared mink and Persian lamb. The lining echoes filigree detailing found in the footwear and apparel. Silhouettes include a drawstring satchel and a small half-moon shoulder bag with a flap closure. Suggested retail prices for the handbags range from $450 to $950, with some styles going up to $2,500.

“Women these days are buying the $4,000 bag and the $1,000 shoe to go with a pair of $200 jeans, and that idea was very much a part of the conceptualization of the [accessories] collection,” Tahari said.

The company sought out factories in Italy that work with brands like Prada, Louis Vuitton and Costume National.

“I needed to go the right craftsmen to be successful with this product,” he said. “The fascinating thing about Italy is that you go to a factory, and it’s run by maybe one family that only make buckles and belts. But they will make the best buckles and belts, and that is what I was after.”

The men’s wear has a luxurious but relaxed feeling, with cashmere coats and blazers, jeans and prewashed leather jackets.

Despite the new categories, Tahari is being cautious about rolling them out. He said he intends to selectively launch them in “a couple of dozen stores in this country. We are starting very small, also in Europe.”

As Tahari’s assortment grows and diversifies, the designer is expanding his freestanding store network with a new concept to house his full range. In late December, Tahari unveiled the concept with the opening of a 2,000-square-foot store at Phipps Plaza in Atlanta. The boutique, designed by architect Piero Lissono, has such details as Mondrian-inspired fixtures and an opulent handmade Venetian glass chandelier.

“It’s a combination of good taste, great product and me being a Persian merchant,” said Tahari, referencing the 18-foot-wide retractable storefront that is kept open during store hours, practically eliminating the threshold in order to make it a less intimidating experience for shoppers.

“The concept is influenced by our lifestyle,” Rory Tahari said. “This is how we like to live….It’s easy luxury.”

Two weeks ago, Tahari took the concept to Boston, where he opened a 2,600-square-foot store at Copley Plaza. It also features an 11-by-12-foot plasma screen that will show images of fashion shows, advertising campaigns and exclusive interviews with the designer. According to Tahari, both stores are already 60 to 70 percent over plan since opening.

The two additions bring the number of freestanding Elie Tahari boutiques to five. Tahari’s other three units are in Manhattan, East Hampton, N.Y., and at the Forum Shops at Caesars Palace in Las Vegas.

Elie Tahari didn’t say how many stores were planned for this year, but noted: “We would like to open a significant number of luxury stores in most luxury markets in the U.S.”

At the stores, shoppers will find a wider price range of Tahari merchandise than before. Until recently, the line was sold at retail from $60 to $1,000, but for fall, prices go up to $5,000 as a result of an increased focus on intricate details, such as beading and stitching, and more luxurious fabrics like fur. The fall collection, for instance, includes looks such as a sheared mink bolero, a rayon and silk crushed velvet embroidered skirt, a washed leather jacket with grosgrain detailed hardware, a silk satin hammered bustier and wool and spandex herringbone trousers.

By 2012, Elie Tahari anticipates having up to 200 freestanding stores worldwide, adding that he hopes to make the stores a destination for exclusive merchandise.

The designer is also embarking on an international growth strategy. This spring, he is tripling the amount of stores globally to include Selfridges in London; Harvey Nichols in London, Dublin, Dubai, Istanbul and Riyadh, Saudi Arabia; Printemps in Paris, and Lane Crawford in Hong Kong. For the first time, he will also present his collection to international press and buyers during Milan Fashion Week, and to that end, has retained Stra Branding to represent the line in Milan.

“International is a wide-open road for us,” Elie Tahari said.

The company, which typically had some regional advertising, is launching a global campaign this fall to support its aggressive growth plan. Created in-house, the ads were photographed by Glen Luchford and styled by Lori Goldstein. The images are atmospheric, featuring Missy Rayder wearing pieces of the spring collection, and, at least in one image, not wearing anything at all.

“I wanted it to speak to the sexy, sophisticated women that Elie designs for,” said Rory Tahari, adding she and her husband aimed for them to convey a cinematic feel. “Elie and I are obsessed with the movies and will go and see almost every movie.”

The ads will break in March issues of publications such as W, Vogue, Glamour, Harper’s Bazaar, Elle, Cookie, Vanity Fair and The New York Times, as well as European magazines such as Italian Vogue. A 20-by-50-foot billboard will go up on Broome Street here next month, followed by a 20-by-24-foot billboard on West Broadway in March.

There’s no doubt the designer is firmly laying the foundations for the future of his company, both financially and personally: In his office stands a miniature desk and chair with a calculator, a cell phone and BlackBerry, and even an award — all set up for his four-year-old son Jeremey and 18-month-old daughter Zoe.