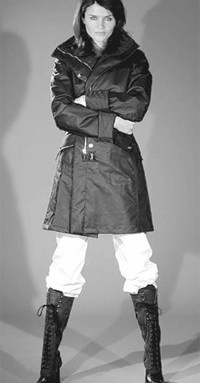 MILAN — Millions of people know Pirelli tires and thousands are familiar with Pirelli’s famous calendar — a coveted collector’s item filled with great photography and top models in come-hither poses — but few know that the giant Italian tire and cable manufacturer has shifted into high gear on the fashion circuit with urban sportswear and accessories.

With P Zero, a fashion project launched in January 2002 and named after Pirelli’s top-of-the-line tire, the $6.8-billion conglomerate has traded rubber for fabric. In less than two years, apparel and footwear sales hit the $22 million mark while its watch, designed by Bulgari and produced by Sector, raked in $3.4 million since its debut last April. Dollar figures are converted from euros at current exchange.

“We feel that P Zero is becoming a serious competitor in the high-end market,” said Carlo Corti Galeazzi, P Zero’s project manager. Fay and Tod’s are viewed as direct competition. “This kind of brand extension has generated lots of interest and since Pirelli is an industrial group, we’re approaching fashion our way.”

The footwear licensee is Licensing Project, an Italo-Spanish manufacturer. As might be expected from the tire-cable supplier, rubber soles are impressed with tire treads that feature special steel cables from Pirelli’s cable division that guarantee durability and stability.

The line has 700 points of sale in Europe and now is crossing the ocean to the U.S., where Bergdorf Goodman has an exclusive agreement for New York City and will dedicate a men’s wear corner to P Zero.

“When we first looked at the line, we were attracted by P Zero’s sophisticated, sporty attitude,” said Robert Burke, vice president and senior fashion director at Bergdorf’s. “We have a discerning customer who buys designer brands but also desires unique and exclusive weekend clothes. P Zero is the perfect match with subtle details and a lifestyle concept associated with cars and sports.”

On Friday, Pirelli and Bergdorf’s will host a cocktail party for 400 at the store to officially launch the brand. Pirelli’s charismatic chief, Marco Tronchetti Provera, is expected to fly in to greet the guests — who are expected to include Sony’s Tony Mottola, Naomi Campbell and Heidi Klum.

Guests also will see a retrospective photo exhibition that recaps 40 years of the Pirelli calendar, with an image per year, including one from 2004 shot by Nick Knight. The calendar, which is not for sale, issues 36,000 copies annually.

Galeazzi is confident that P Zero will make significant inroads in America. “The U.S market is a priority on our business plan because we believe the Pirelli brand has a great allure and echo,” he said.

Supporting his view are the first encouraging signals coming from initial shipments, which arrived this month. “We had a waiting list for 400 timepieces, which Bergdorf clients saw in the store’s in-house catalog even before they went on sale,” noted Galeazzi.

Burke confirmed that the watches were “gobbled up” and described them as one of the best new products he’s seen in a while. Retail prices run from $688 to $1,300.

The watch, which includes a chronograph version, is either automatic or quartz and has an Indian rubber strap etched with a tire tread. Future developments include a handbag collection licensed to Sergiolin that melds tradition and innovation via quirky mixes of materials. The line is slated to bow for fall 2004 and complementary pieces like T-shirts, pants and knits will start next spring.