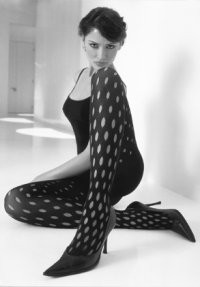 NEW YORK — The tough economic times and continuing difficulties in legwear are leading many makers to take bold steps to get and retain business.

Levante, for example, just started a new program guaranteeing 70 percent margins for retailers who commit to big programs, while Hanes is offering more products that fall into the innerwear realm, such as seamless thongs and boy-cut panty underwear that pulls in the tummy.

Other companies are stepping up their three-for-$12 or three-for-$15 programs to boost value for their end customers.

John Flynn, vice president of sales at Levante U.S., said, “We are guaranteeing the margins because we want the business and we are willing to be aggressive.”

Nonetheless, fall is the biggest market in legwear, accounting for about 70 percent of the sector’s $3 billion in annual sales, and many believe the future is brighter. A number of firms said they expect to at least break even with last fall and many said they are planning for increases. Legwear also has been shown on the runways both in New York and Europe, giving makers another reason to cheer.

“Times are tough now and consumers are nervous, but everyone expects fall to be better,” said Pat McNellis, president of women’s brands at Royce Hosiery Mills.

The particularly cold-weather winter this year boosted sock and tights sales, and some even said that the biting cold and rainy weather during market week kept many buyers in the mood to stock up on the category. March market is the largest one for legwear vendors showing fall and holiday offerings.

There were a number of new licensed lines that made their debut during the week. Etienne Aigner launched its legwear with a party at the New York showroom of Paul Levitt Mills, which is producing the line, while Emme legwear was introduced by Phantom USA.

Emme hosiery is targeted to plus-sized customers and includes a line aimed at department stores, as well as a line called True Beauty by Emme that is exclusive to J.C. Penney. Retail prices are $12 to $16 for the core line, and $8 to $15 for the Penney’s line, and company executives declined to give sales projections.

Royce introduced a new licensed line of socks under the Hershey’s name, with socks featuring smiling candy kisses and styles with Jolly Ranchers. Retail prices for the nonedible line are about $6, and McNellis projects first-year sales of about $1 million.

Comfort fabrics dominate many of the new offerings and firms across the legwear spectrum are stepping up their selection of slipper styles and cozy looks. A number of new styles have unfinished edges, giving them a handmade appearance. Among the fabrics gaining ground are tactile materials such as angora, chenille and cashmere, as well as acrylic blends, many of which are coming from the sweater category.

Novelty items and conversational styles continue to dominate much of the sock scene, especially looks with bold-colored stripes. Soxland, for example, showed a range of socks with Halloween motifs to gain more business around that holiday, while Legale introduced a number of styles with animal motifs, including an animal head that squeaks when pressed. Knee-highs and tube socks booked well, a trend that many say will work especially well with all the miniskirts on tap for fall.

There was also color infused into nearly every collection, even for trouser socks, which are usually available in more muted hues. A number of companies also have offered more socks that have nonbinding features.

Some firms are moving into new categories as a way to eke out more market share. Gold Toe, which is best known for its athletic looks, has added additional tights styles for fall, as well as more trouser socks, including some in bright colors.

“With the vendor base shrinking, many retailers are looking for one vendor to supply all their needs,” said Michelle Cannon, president of women’s and children’s at Gold Toe.

She said her company has started new initiatives aimed to assist retailers in focusing on wear-now products.

“We are trying to make sure retailers are showing the right product at the right time and we are rolling out new packaging and new point-of-sale materials to help them with that,” Cannon added.

The company is pushing a new arena that it calls “athleisure,” which includes more fashion-forward versions of its athletic socks using lighter-weight materials than traditional sport styles.

Among sheer companies, Hanes is focusing heavily on its Body Enhancer line introduced last fall and it has introduced a number of new products that are designed to shape and minimize.

“Body Enhancers are the most successful launch we have ever had,” said Howard Upchurch, president of Sara Lee Hosiery, which includes Hanes and L’eggs. “These products resonate well with consumers in terms of how they are dressing now. We are looking for ways we can contemporize across all of our products.”

Among the additions to the Body Enhancer line are a seamless thong panty, a seamless boy-cut panty, an anticellulite capri and a seamless midthigh style.

In its Silk Reflections category, Hanes is also offering more anticellulite styles that release firming ingredients to reduce the appearance of cellulite.

Hanes also launched a contemporary sock line called Stepz. While it has had socks before, Stepz includes knee-highs, as well as calf styles and anklets. The packaging comes in bold colors such as red and yellow, and prices are three for $15.

“We think with all of our new products we can at least hold even with last year, if not grow,” said Upchurch. “Overall, it is a tough retail environment, but we feel we have momentum.”

Levante, meanwhile, is offering a variety of sheer and tights options, including fishnets, as well as socks, which now account for about 50 percent of overall sales, said Flynn.

Wolford, meanwhile, introduced a number of stylish legwear looks such as a new take on fishnets that has large, open dots, as well as a style similar to a corset that has a leather lace-up tie on the outside.

Wolford, which also has 24 stores in the U.S. and Canada, is in the midst of introducing a new bridal line, which includes special packaging. In addition, the company is expanding its bodywear collection, which now accounts for about half of total sales, said Maria Basquil, national sales manager.

“Many stores have narrowed their hosiery assortments, so we have to become more important,” she noted.