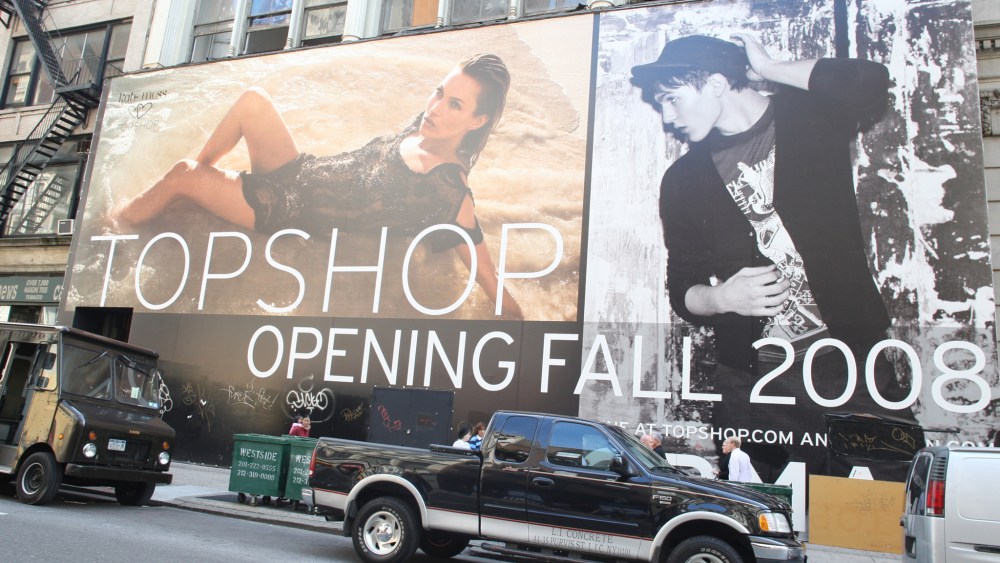 LONDON — Once the hottest high-street store in Britain, Topshop has become yet another victim of the COVID-19 lockdown, and of broader changes in British retailing, including the rise of international giants such as Zara and H&M, and the mass appeal of cut-price online competitors such as Boohoo. Here, WWD looks at the rise and fall of the store, and its colorful owner Sir Philip Green. — By Samantha Conti and Léana Esch

2003: Topshop becomes a headline sponsor of the British Fashion Council, supporting the NewGen program and fashion talent incubator Fashion East and sets up a seasonal runway show space during London Fashion Week in a bid to support young talent.

2005: The Topshop Unique collection makes its debut on the runway, showcasing the spring 2006 collection at London Fashion Week, becoming one of the most talked-about shows of the season. In later years, front-row guests would include Kate Moss, Lara Stone, Kendall Jenner, Erin O’Connor, Jourdan Dunn and Lottie Moss.

2005: Tina Green gets a tax-free 1.2 billion pounds dividend from Arcadia.

2006: Green is the driving force behind the opening of London’s Fashion Retail Academy, which trains students for a variety of careers in the field, with programs ranging from short courses to fashion diplomas. Former Prime Minister Tony Blair had approached him about opening a school, but Green preferred a fashion academy.

2006: Queen Elizabeth II grants Philip Green a knighthood for services to the retail industry, such as founding the retail academy and supporting the BFC.

2007: Kate Moss reveals her first collection for Topshop. The 50 designs launched with much fanfare, with the crowds practically stopping traffic in Oxford Circus, and the model briefly appearing in the windows. The collection is followed by more than a dozen others in the years that followed.

2009: Green and Moss cut the ribbon on the Topshop store in New York on the corner of Broadway and Broome Street. Shoppers line up for more than five hours to take a look inside.

2012: Leonard Green & Partners, the Los Angeles private equity firm, buys a 25 percent stake in Topshop, which in the three years since its arrival in the U.S. had struggled to make a major impact. The Greens’ plan was to generate $1 billion in revenue from the Topshop and Topman brands in the U.S. and to double the brands’ worldwide sales in the subsequent four years. The deal valued Topshop and Topman at $3.22 billion. As part of a new strategy for Topshop, the retailer links with Nordstrom to open shops-in-shop for the brand within the department store.

2014: Moss launches her 14th and final collection with Topshop, capping a long-term relationship with the brand.

2018: Beyoncé severs ties with Green and buys out his shares in Ivy Park following a string of scandals, including the collapse of Green’s retailer BHS, which he sold in 2015 for 1 pound, a public Parliamentary grilling over Green’s responsibility for the hole in the BHS pension fund, and a workplace harassment investigation by The Telegraph newspaper.

2018: Topshop parent Arcadia Group swings into the red in 2018 with the company recording a loss of 114.4 million pounds as revenues shrink 4.5 percent to 1.82 billion pounds. Arcadia had a bruising year due to declining profitability in stores, rising costs and lackluster sales.

2019: After seven years, Leonard Green & Partners and Sir Philip Green call time on their Topshop/Topman partnership. Leonard Green sells its stake back to Philip Green for just $1, reflecting the state of the Arcadia retail empire. By this point, Green has begun to restructure the retail giant, which has been overtaken by rising costs, falling footfall and troubles on the U.K. high street, not to mention competition from more muscular, international players, such as Zara and H&M.

2019: Arcadia narrowly avoids filing for bankruptcy after its creditors finally agree to back a corporate restructuring plan put forward in late May. The group’s disgruntled creditors vote in favor of seven proposed CVAs, or company voluntary arrangements. Creditors’ approval means that Arcadia is free to close stores, lay off workers, negotiate rent cuts and slash costs in a bid to return to profitability.

2020: COVID-19 sweeps through the U.K., with lockdown declared in March and stores closing nationwide. Arcadia takes advantage of a generous government furlough scheme and reopens its stores in June. It’s forced to shut them once again in November during another national lockdown, which pushes the firm toward bankruptcy.