NEW YORK — Many of fashion's "It" girls are born and bred in the U.K., and no one understands this better than Tanner Krolle's chief executive officer Guy Salter.

In an effort to revitalize the 149-year-old handbag company's London-cool... 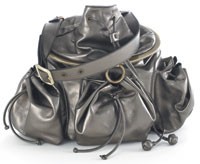 NEW YORK — Many of fashion’s “It” girls are born and bred in the U.K., and no one understands this better than Tanner Krolle’s chief executive officer Guy Salter.

Clarke’s entry marks a youthquake for the brand. After attending the Royal College of Art in London for footwear and studying fashion at Saint Martin’s School of Art, she designed accessories for Hussein Chalayan, DKNY and Asprey. She launched her own shoe collection in 2003 and has been the talk of industry insiders since.

“For us, it’s really about the London-chic thing,” said Salter, adding that this is what he was hired to bring to the London-based brand. “It’s a sense of luxury that’s quirky, dangerous around the edges.”

Tanner Krolle has been through more than a few incarnations. The leather goods company was founded in 1856 by Frederick Krolle, a contemporary of the founders of Louis Vuitton and Loewe. Though it provided the British aristocracy with luggage and saddles, public interest in it waned. Chanel purchased the dusty brand in a buying spree in 1991. Though it still was unable to find its footing with the fashion crowd during its tenure at Chanel, retail accounts, including Neiman Marcus and Bergdorf Goodman, held on to the luxury vendor.

Salter, who worked for the brand under Chanel, bought it with a group of investors in 2003.

“It wasn’t a lovable brand when it was owned by Chanel,” Salter said. “When I bought the brand, I thought it would be great to work with up-and-coming London talent…and people have been talking about Adele for ages in a stealthlike sort of way.”

Clarke, on the other hand, combined the house’s luxury heritage and resources with the backdrop of London. She searched through the costume archives of the British Museum and found inspiration in an 18th-century leather and brass bag once used to carry coins

Clarke reworked the silhouette into a contemporary handbag that is the centerpiece of the fall collection. The Money Bag in butter-soft napa that slouches down elegantly has a tarnished nickel bezel lid. Another style is an oversize slouchy crescent bag in a butter color, made of the house’s famous bridle leather and featuring Tanner Krolle’s signature leather knots.

Clarke, who gave birth to a son, Orson, three weeks ago, calls her collection of handbags and shoes “London-centric…. It’s like hearing a London accent in New York, but [without] it being too strong. I’m trying to make [the accessories] more feminine than they were. There is an overall backward-forward way of designing in London. It has an urban feel injected with femininity.”

Footwear, which is being tested in the firm’s three U.K. boutiques and in retail partners such as Harrod’s, ranges from pointed flats in shiny calfskin to suede and leather round-toe, knee-high boots on a medium heel. Depending on its success, footwear will be brought to the U.S. market.

The company is not looking to expand the number of wholesale accounts significantly. “We expect to see healthy revenue increases, but not from [opening] more doors,” Salter said. However, the company is testing the waters in retail, with plans to open a boutique here by mid-2007.

In addition to its three U.K. boutiques, Tanner Krolle now has distribution in specialty stores in the U.S., Japan and London. Salter declined to give sales figures, but in 2003, the company was reported to have sales of about $8.3 million.