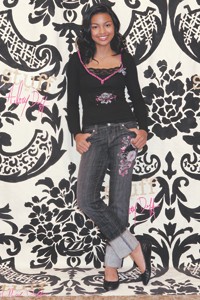 LOS ANGELES?— Hilary Duff is ready to strut her stuff.

The 18-year-old actress and singer, nine months after becoming chief executive officer and head designer of her own fashion and lifestyle company, HD International, is rolling out for back-to-school a tween line of clothing, jewelry, home decor and other items.

The tween brand, stuff by hilary duff, has been picked up by mass retailers such as Wal-Mart, Kmart and Target as well as midtier and specialty retailers, including J.C. Penney, Sears, Kohl’s, Gottschalks, Goody’s and Claire’s Stores.

Merchandise will be in almost 10,000 doors worldwide at launch and the business is projected to exceed $1 billion in retail sales within two-and-a-half years. That figure excludes Duff’s eponymous junior clothing label, which is to bow late next year with the opening of freestanding stores in New York, Los Angeles, Chicago, Miami and possibly other cities.

The goal for first-year wholesale sales is $200 million in seven countries: the U.S., France, the U.K., Canada, Australia, New Zealand and South Africa.

“We wanted to make clothes that look like they’re for older kids, but they fit the younger kids,” Duff said in an interview. “I don’t really get my inspiration in designing a line that is superexpensive like those designers’ [labels]. I understand this is for kids who grow constantly. They buy their shoes and three months later they can’t wear them.”

The overall mood of Duff’s tween line is girly, youthful and fun. Denim is a key component. Made of stretch cotton to better suit a growing body, the jeans are adorned with embroidery in pink, red and blue. A fan of layering, Duff offers piles of leggings, including a pair that will be sold with a patch-covered denim miniskirt.

Although she was battling a cold, Duff on Tuesday signed copies of her CDs for 12-year-old models at a WWD photo shoot in Manhattan and explained the trends behind each of the outfits and her vision for the line.

She and her creative director, Geoffry Gertz, created as many as 11 key product groups for different seasons with names such as “Queen Victoria,” “Broken English,” “Precious Metals” and “Charm School.”

For “Queen Victoria,” there is a gray cotton and wool miniskirt accentuated with a white lace underlay and an embellished brooch pinned to a trail of tulle. With “Broken English,” Duff’s personal favorite, the schoolgirl look is achieved with a hooded sweatshirt emblazoned with fleur-de-lis prints. Lace-trimmed handbags complete the ensemble. Gertz said “Broken English” was developed for Wal-Mart as a punky-preppy grouping, while “Precious Metals” was designed for Kmart as a rock-chick-inspired mix of studs, distressed metallic prints and tattoo art.

Duff, who has attended runway shows for Michael Kors and Antik Denim as well as the London launch party for Stella McCartney’s H&M collaboration, is taking cues from the women’s apparel industry by adapting trendy, fast fashion for the tween market and offering exclusive items to retailers.

“You can make it affordable so that they [customers] can have the coolest fashion and the coolest things that come out and not go to the poorhouse,” Duff said.

“At this age group, they grow out of clothes so quickly,” he said. “They’re not going to want to invest a lot, especially if you have Target and Old Navy that give fashion at rock-bottom prices.”

The potential rewards are considerable. For the 12 months ended in April, clothing sales for girls ages seven to 12 totaled $5.2 billion, up more than 5 percent from $4.9 billion a year ago, according to The NPD Group, a research company in Port Washington, N.Y.

Analysts said the tween market is less crowded than juniors and women. Yet top-tier brands such as Marc Jacobs’ Little Marc, Frankie B. and True Religion have started wooing tweens and their parents.

“Especially in fashion, tweens are becoming increasingly important as they are becoming more vocal,” said Catherine Stellin, vice president of The Intelligence Group, a trend-research firm in Los Angeles. “They’re so brand-aware. They are very opinionated about what they wear.”

One of the best-known tween brands is mary-kateandashley, launched by Mary-Kate and Ashley Olsen at Wal-Mart in 2001. The brand had an estimated $1 billion in retail sales by 2004, with apparel representing about 80 percent of the business. The Olsens expanded their cosmetics, jewelry and accessories lines to Claire’s Stores this year to diversify retail distribution and attract shoppers who are older than their core tween fans.

As owners and co-presidents of their Culver City, Calif.-based lifestyle and entertainment company, Dualstar Entertainment Group, the Olsens earned a total of $21 million, compared with Duff’s $15 million, according to Forbes magazine’s “The Celebrity 100” list for 2005. Ranked by earnings and buzz, the 19-year-old Olsens snared the 35th spot in “The Celebrity 100,” ahead of Duff’s 54th placing.

Among tweens, however, Duff has momentum. A June 2005 survey by Nickelodeon and The Intelligence Group of 400 girls and boys between the ages of nine and 14 said Duff was their favorite actress and the most admired celebrity because she both acts and sings.

Putting herself in a better position to compete against the Olsens, Duff has teamed with Robert Thorne, the twins’ former manager and, until last year, ceo of their company. Thorne, who is Duff’s brand manager and ceo of his namesake company in Beverly Hills, Calif., said Duff’s tween clothing line will attract girls as young as five and as old as 14, with sizes 4 to 16.

Tween sportswear and accessories will begin shipping in July, and footwear and swimwear will bow next year, Thorne said. Home decor, including bedding and clocks, are hitting stores now. Furniture such as beds and desks will be out for fall 2007.

Duff and Gertz said they will begin working on the junior label in three months.

“That’s a whole different demographic and a whole different distribution channel,” Thorne said of the teen brand, which he hopes will have sales comparable with the tween business. “The plan right now is to have top-tier department stores [for Duff’s namesake teen line] and have a clear distinction between the two retail distributions. Right now, the focus is midtier, mass and specialty for stuff by hilary duff.”

The fall launch is Duff’s second effort in the tween market. In 2003, she rolled out a limited offering of hair accessories, jewelry and apparel in the U.S., Australia, New Zealand and Canada.

“I didn’t get to have that much control as they said I would,” Duff said. “It was all trial and error.”

For this fall’s launch of tween apparel in the U.S., New York-based Kids Headquarters will manufacture sportswear, sleepwear and swimwear, and Brandon Thomas Ltd., also based in New York, will produce outerwear.

Busy tween parents such as Ileane Brones, an interior designer from Bel Air, Calif., who recently bought a party outfit for her seven-year-old daughter, Bretta, at Limited Too in Los Angeles, look for shopping convenience and “for something that is cute, that will hold up and is priced well,” she said.

Wearing a pink outfit and with a charm bracelet on each wrist, Bretta said she listens to Duff’s songs on the radio and watches her movies. While Bretta may represent the ideal customer for stuff by hilary duff, Brones’ 10-year-old daughter, Carissa, might be over Duff, even though she liked the entertainer’s 2004 film, “A Cinderella Story.”

Thorne said Duff’s name and celebrity help the label secure space in stores. Yet, Thorne added: “At the end of the day, we’d like to think if you take the branding material off … the product sells itself.”

Duff sought inspiration by scouring shops for antique velvet trim. She observed young Londoners at Camden Market pairing short skirts over pants with cropped jackets. Along with Gertz, Duff burrowed into her own vast closet in Los Angeles, where she stores all of her clothes, even sponge-painted leggings that she wore when she was seven years old.

Duff also met with buyers from Wal-Mart and Kohl’s and is learning how to sew. “I love it,” Duff said.

She wants her designs to stand out from other tween clothes.

“That’s one of the big focuses,” Duff said. “I didn’t want the generic of some of these things of the other brands out here. Everything is going to have plaids or hoodies or studs. Every line has a variation of that. A lot of our zippers are much bigger. A lot of the buttons on jeans, they’re much bigger and bolder. I like that. They make a statement.”