McQ line for Target to be part of new Designer Collaborations initiative. 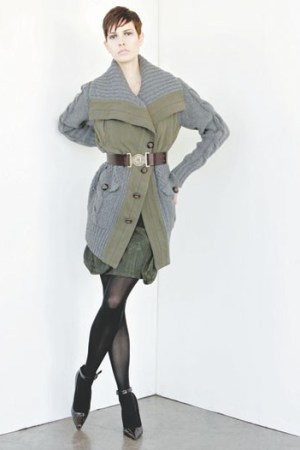 As Isaac Mizrahi’s final collection for Target cycles through stores, the retailer is unveiling plans for a new fashion initiative.

Target in March will launch Designer Collaborations, which is aimed to be an ongoing program that will bring a series of established designers to the masses at low prices. Designer Collaborations is a separate program from Target’s Go International, which focuses on young or emerging designers and, in the past, has featured names such as Proenza Schouler, Luella Bartley, Behnaz Sarafpour, Rogan and Richard Chai. Industry sources have estimated that Go International does more than $100 million in annual sales.

This story first appeared in the November 5, 2008 issue of WWD. Subscribe Today.

“Both programs are geared toward our trend-minded guests who are always on the hunt for the newest and hottest looks at an affordable price,” said Trish Adams, senior vice president of Target. “Designer Collaborations is another way in which Target brings an emporium of designers to our guests. This specific McQ Alexander McQueen for Target collection does have the potential to skew toward a slightly older guest compared to some of our other designer collections.”

The retailer said additional Designer Collaborations are planned. Each collection will be available in stores for a limited time.

Participating designers will draw inspiration from a muse, creative element or collaborative partner. McQueen chose as his muse Leila Moss, the lead singer of The Duke Spirit, a British band known for mixing noise rock and grunge in the late Eighties and early Nineties. Moss’ style gave the line its rock ’n’ roll-punk vibe and hip-Brit accents.

“We believe Designer Collaborations will appeal to our fashion-forward guests as well as possibly attract new customers who are fans of Alexander McQueen and McQ,” Adams said.

McQueen, who established his secondary line, McQ Alexander McQueen, last year, said at the time that it’s “younger and more renegade [than the main collection], but always signature McQueen.”

The collection has a muted color palette of black, white, gray and tan with accents of cobalt blue and bright pink. Studs and mesh give items an edge. For example, a chambray sleeveless shirtdress has stud detailing, there’s a mesh wrap dress and an open yarn zipper cardigan. Graphic prints and silk-screen photographs give tunics, dresses and T-shirts visual interest. The Leila silk-screen T-shirt with a necklace collar was designed for The Duke Spirit lead singer, while other band members are immortalized on a sleeveless jersey T-shirt.

A sateen strapless pleat dress in a tattoo print of mermaids, dice and anchors is an example of McQueen’s penchant for pairing feminine fabrics with tough details — in this case, a studded leather belt.

“The McQ Alexander McQueen for Target collection will be supported with an advertising strategy designed to drive buzz and traffic via innovative out of home, online, national magazines and e-mail,” Adams said.