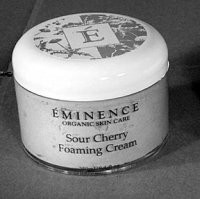 NEW YORK — Spa products are the latest culprits to blur the line of originality. How many more seaweed-infused body scrubs does the industry need? But one regimen — imported from Hungary — is standing apart from the pack by requiring a true hands-on approach from aestheticians.

Eminence Organics Skin Care, a just-add-water treatment line comprised mostly of formulas in concentrate form, is finding its way into a handful of spas across the country.

Created by Ilcsi Molnar in 1958 — based on her grandmother’s herbal ritual’s — Eminence packs as much as five pounds of fruit in each 8.4-oz., professional-sized jar. The fruit formulas, which contain no added water, are combined in a honey and lemon base with fruit pectin, and are preserved by salicylic acid. This combination means aestheticians must dilute the product. In fact, aestheticians are given a “principals of dilution” list explaining different ways to water down such Eminence items as the Sour Cherry Masque, the Quince Apple Masque and the Pumpkin and Orange Masque.

Depending on skin type, Eminence suggests diluting formulas with herbal teas, juices or water at varying temperatures. For sensitive, inflamed, acne-prone skin, Eminence recommends a dilution of chamomile tea at a cool temperature. Oily-to-normal skin requires either warm peppermint tea or a lemon juice dilution. Sensitive skin can stand to benefit from an orange juice with banana dilution, and mature, dehydrated skin requires a lavender tea or grape juice concoction.

Eminence makes nearly 50 different products for the face and body. While some require dilution, other products are ready to use, such as an extensive line of whipped-cream moisturizers. These creams contain fruit juices in a natural, neutral base, which are whipped until the consistency of a soufflé.

According to Boldijarre Koronczay, an Eminence brand manager at the company’s North American headquarters in Vancouver, Eminence’s founder wanted to revolutionize spa products in her native Hungary to better reflect the country’s natural resources. Koronczay said Molnar, a trained aesthetician, borrowed many of the elements used in Eminence from her grandmother, an herbalist healer. It seems Molnar was displeased after learning that many products made in Hungary contained artificial ingredients.

Eminence first emerged in the U.S. four years ago. Now, the company’s products are used and sold in a smattering of U.S. locations, such as the Golden Door Spa in Puerto Rico, the Boca Raton Resort & Hotel and select Ritz-Carlton hotels. In Manhattan, Eminence is used and sold at Tracie Martyn Salon, Completely Bare Spa and Splash at the Sports Club/LA-New York. Some of the spas that offer Eminence treatments also sell Eminence in 2-o.z. consumer-friendly sizes. Eminence retails between $30 and $80; concentrated formulas come with dilution instructions. Internationally, Eminence is sold in Canada, the United Arab Emirates, the Czech Republic, the Ukraine, Poland, Germany and Hungary. U.S. retail sales are estimated between $4 million and $5 million.

One of Eminence’s more popular spa treatments, according to Anna Gleichauf, the front-desk retail manager for Completely Bare Spa in Manhattan, is the Paprika Facial. It starts with an apple-based alpha-hydroxy mask, followed by a paprika mask, which draws blood to the surface of the skin, Gleichauf said. The Paprika Facial at Completely Bare costs $250 for a 90-minute service and is not available for consumer consumption “since it is such a strong treatment.”

Eminence’s pull-no-punches treatment approach is also what appealed to Christine Borkenhagen, Splash spa manager, at the Sports Club/LA-New York. “I wanted an organic line that was more aggressive. Many organic lines are really gentle and don’t give the results a user wants to see,” Borkenhagen said.

While the company is always looking to expand distribution, Eminence’s growth will remain very selective in upscale salons and spas. “It is very unethical for us to sell this type of product in a store. I don’t believe in it,” Koronczay said.