The only thing hotter than the celebrity fashion at the Teen Choice Awards' blue carpet was, well, the heat itself. 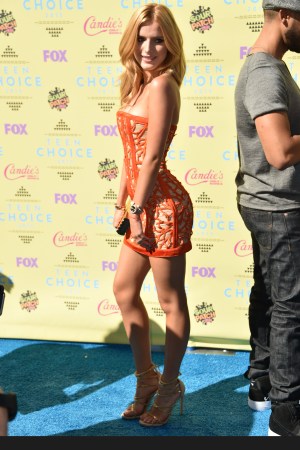 With all the age-appropriate bare midriffs, sexy cutouts and curve-hugging styles, the only thing hotter than the celebrity fashion at the Teen Choice Awards’ blue carpet was, well, the heat itself. The 90-plus temperatures in Los Angeles send several of the A-list attendees – Emma Roberts, Lea Michele, Sarah Hyland, Rita Ora, Chloe Grace Moretz, Lucy Hale and Shae Mitchell among them – scurrying down the arrivals line to escape the blazing sunshine, stopping for makeup touchups and quick refreshments in the shady, neon-colored on-site Candie’s and Sour Patch lounge.

Some of stars planned ahead, dressing for comfort than for style. “This is all from the closet of Chelsea Kane,” laughed the “Baby Daddy” actress of her deliberately cool self-selected look. “I was just trying to find something cool and comfortable because it’s a million degrees outside! And It’s nice knowing you’re not going to show up in the same dress as someone else.” Making her second trip to the Awards, Maia Mitchell, a double nominee as both Choice TV Actress, Drama for “The Fosters” and Choice Summer TV Star for “Teen Beach 2,” admitted her gauzy white Giamba by Gaimbattista Valli ensemble and slicked back hair was also chosen for its breeziness “The Teen Choice Awards carpet is always really long and really hot, so I’m going to wear my hear back, so it’s windproof and heatproof. I don’t muck around anymore!”

Others were willing to suffer a bit for style, like “The Hunger Games” star Willow Shields, whose Marni dress was gorgeous but decidedly heavier than most. “It’s very warm, but it’s worth it because it’s fabulous!” said the young star. “I figured it was something people weren’t going to wear to this event, so I went for it!”

“The Flash’s” Candice Patton also braved the heat more than most in her Dsquared2 dress: “It’s very tight and very hot, but I loved it and I couldn’t say no. It feels like armor, like I’m in my own superhero costume.” Nominated for Choice TV Chemistry with co-star Grant Gustin, she was less worried about heatstroke than how she might get a surfboard-award back home. “I don’t know how I’m going to get it through customs. We shoot in Canada and I can barely get my luggage through.”

And “Pretty Little Liars'” Vanessa Ray was basking in a new kind of heat of her own: just revealed as the series’ long-hidden villain “A” and now a nominee as Best TV Villian, she got the kind of squealing reception from the teen fans in attendance reserved for pop star royalty. “Am I in a boy band? If One Direction needs someone, right? I’m transgendered on the show – I’m available!” Ray laughed. “My life has changed crazily in a week. I went from obscurity – like, only my parents followed me on Instagram – to having all kinds of people having comments and opinions for me! This is a cool moment to capture in my own personal life. I’ve never done anything like this before.”