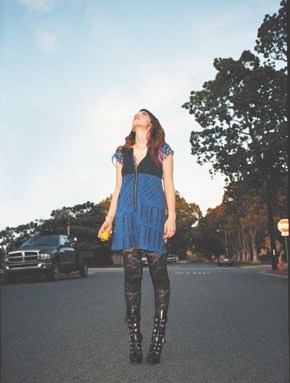 SANTA MONICA, Calif. — Fashion “It” girls have long had a launching pad rooted in something, whether a gilded family tree (the Hearst girls, Margherita Missoni) or a self-made empire (mini moguls Mary-Kate and Ashley Olsen). But Cory Kennedy, who burst onto the scene two years ago, had a…blog? Indeed, she doesn’t fit the mold of socialites of yore, but the SoCal-based teen is often seen elbow to elbow with the aforementioned women in fashion magazines and at after parties. Her reception, of course, has been mixed. “Well, I’m not going to name names,” says Kennedy, 18, who’s on schedule to graduate from high school in June, “but of course there are going to be people who are weird, mean or jealous toward someone like me.” Her unorthodox path to front-row status began with an internship with hipster nightlife shutterbug Mark “The Cobrasnake” Hunter. That led to a controversial romance (at the time she was 15 and Hunter was 20) and Kennedy, often disheveled and glassy-eyed, became the star-muse of Hunter’s Internet oeuvre.

Kennedy’s quirky style and jolie laide appeal have since paved the way for Urban Decay and Sebastian ad campaigns, design collaborations with Ksubi and Jeremy Scott and even an upcoming solo photography exhibit at the Andy Warhol Museum in Pittsburgh. Here, Kennedy (looking a tad more wholesome than she typically does on the Internet) opens the door to where it all began — the environs of her childhood home — in punk- and rave-influenced fall looks.