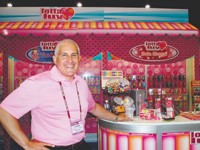 SAN DIEGO — The ever-shrinking drugstore industry at times made attendance at the National Association of Chain Drug Stores’ Marketplace meeting, held June 24-27 here, appear poor. But statistics from NACDS reveal that the number of people flocking to the San Diego Convention Center numbered 3,900 — about even with last year. That breaks down to 3,150 manufacturers representing 600 companies and 750 retail buyers from 210 retail companies.

A successful show required pre-booked appointments, said one vendor, responding to those exhibitors who said it was hard to get buyers to their booth. An executive from a top drug chain added, “I don’t like when people complain about attendance at this meeting. At no other meeting do you get the level of attendees as Marketplace.”

Keeping attendees busy prior to show floor business meetings were sessions on various topics, including one on the characteristics of the loyal drugstore shopper, and another on how to increase purchases during a customer’s “quick trip” to the drugstore. One of the best attended sessions was Teen People’s Trendspotters, where attendees got to ask teens about what they thought of the products they saw on the show floor, as well as what drives their own purchases. This year’s teen panel included three African-Americans (two girls and one boy) and one Caucasian (girl). Among the revelations:

Next year’s NACDS Marketplace meeting is planned for Boston.