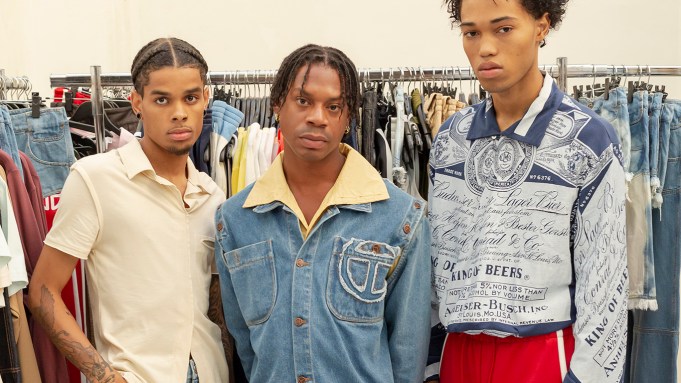 Telfar Clemens said this over the phone about his spring 2020 runway show on Monday, which kicked off Paris Fashion Week and marked his first time showing on the schedule. The New York City-based designer was invited by the Fédération de la Haute Couture et de la Mode to present his spring 2020 collection, but the Liberian-American designer from Queens didn’t just pack up and leave New York City without parting gifts.

Clemens held a preview screening for his film, “The World Isn’t Everything,” which featured his latest collection and actor Ashton Sanders of film “Moonlight” and television series “Wu-Tang: An American Saga.” He released a campaign video for his jewelry collection that riffs off of his logo, arguably made famous by his Shopping Bag. He also unveiled unisex uniforms he designed for nonprofit Swiss Institute, which hosted his spring 2015 show, and hosted a preview of “Slave Play,” a show by playwright and friend and frequent collaborator Jeremy O. Harris.

Then the designer hitched a flight to London to do more edits on his film before finally landing in Paris to prepare for the show. With jam-packed weeks leading up the big show, Clemens was very upbeat on the phone the night before show prep went into full swing. “Where are we?!” he joked after forgetting he was just in London.

One can sense that Clemens is having the time of his life, collaborating with close friends and supporters, living in the moment, and embracing spontaneity, which he had done for his past shows, his jewelry collection campaign films and even the film that ran concurrently with the spring 2020 runway show.

“We’re interested in working this way and the people supporting us are working in the same way,” he said. “I think it’s evolving naturally, because we’re bored doing things the same way. We’re super happy about where it’s going and the project we have going on.”

The screening at New York Fashion Week was far from boring, as several trekked in the rain to Bushwick, Brooklyn, to see what Clemens wanted to share with the world after hearing he would be showing his spring 2020 collection in Paris. “To be honest, it caused a lot of confusion, but no one’s done that before,” said creative director Babak Radboy. “For us, it’s just the beginning.”

The preview debuted with a party on Sept. 6 sponsored by Budweiser and White Castle, a collaborator of Clemens’ that provided food for the occasion. The screening was more of a trailer to the collection and to the actual film that is longer and features “contributions from others,” Radboy said.

He added, “Part of the idea was a show that can be distributed as multiple other things, but made from other videos.”

The film that showed on Monday was shot in a nonlinear format with bits from the preview, but with contributions from Harris — “Jeremy wrote most of the film,” said Radboy — Petra Collins; Ian Isiah, who attended the preview screening in New York City, and artist Steve Lacy, whose contribution “will be a single for his album,” Radboy said. Additional contributors include Diamond Stingliy, Juliana Huxtable, Kelsey Lu and more who shot in New York, Los Angeles, Ohio and Paris. “This is us playing with what fashion week means now,” added Radboy.

“We always wanted to eventually show in Paris. You do all of your business in Europe and I feel like this fashion week was a bit different. I feel like New York Fashion Week has been fluctuating and changing, there’s an existing culture, and everyone knows each other. We’ve been doing these pretty crazy shows in New York and we wanted to do the same thing in Paris.”

Telfar runway shows were can’t-miss experiences — the Blade helipad show, the concert with Kelela, Dev Hynes, Isiah, 070 Shake and others, the Irving Plaza show with Harris, the White Castle after party — and all made better by spontaneity and trust. “We’re really into that feeling of presence and what we can do that no one else can do no matter how much money you have,” Radboy said.

Clemens added, “We’re trying to do in the film what we do at our shows, which is this collective.” That magic spilled into the film, which was also built on trust. “They just sent whatever,” explained Radboy. “We sent them things we were thinking about, but not any specific thing they were supposed to make and they stayed true to what our interests are and they’re better than we’ve ever thought of and more surprising. We really collaborate with people so we don’t control. We actually don’t know how it’s gonna go.”

That trust could be considered one of the foundations of the brand as well. Clemens established his namesake label 14 years ago, and was producing clothing for 17 years. The industry caught up to his output and ideas years later, as did retailers that started buying thousands of units of his bag four times a season. The bags were previously selling exclusively on his web site. Radboy said he doesn’t know the latest figures of the bag, “because it’s been doubling every couple of months.”

The CFDA turned its attention to Clemens, appointing the designer to the association, naming him the winner of the CFDA/Vogue Fashion Fund in 2017 and the $400,000 top prize, and recently nominating him as Accessories Designer of the Year. He may not have taken home the award, but the CVFF prize made all of the difference for providing funding “to make clothes the way we wanted to make them,” Radboy said.

Telfar moved production from China to Italy — though he is still producing in China — and is learning how to work with an atelier. “The move is definitely on working in a way with more attention and attention to detail and actually working with a company that’s supporting us in the way that we want to move forward. It’s all about support.” The first Made in Italy looks debuted on the runway on Monday.

Support could also be considered a foundation of the brand. It’s not just about having famous friends like Harris, Isiah, Sanders and A$AP Ferg, who all showed support at the film preview. Friends and collaborators of the brand show up for Telfar, including Oyinda, Stingily and chef Danny Bowien, who appeared in the brand’s jewelry campaign videos that were reminiscent of Dockers ads from the past. “That was the basic reference,” Radboy said. “We told the [director of photography] to keep it tight, and people kept asking when the shoot was gonna start. We just wanted to actually show some life.”

The collection includes the brand’s logo in gold and silver hoop and stud earrings and a logo pendant, retailing between $160 and $240, and is available exclusive on the web site.

“We have a whole system going,” Clemens said. “It’s small, but it’s doing really well. We want that to be our next thing you’re able to get and it’s affordable.” This was all built from trust and support despite, as Clemens said previously, “working outside the system for 15-plus years” and creating an indescribable universe.

Clemens has been described as a unisex designer, his story used as an example for progress in diversity and inclusion — “I always say included in what? I don’t want to be included to be included, invited yes but included, no thanks,” he said— but his rejection of labels and identity is, in a way, inclusionary. His collections include high-waisted bottoms with extra wide bootcut leg openings, loose fitting shirts, one-shoulder tank tops and tops with wide neck lines. Silhouettes disrupt what people expect of a traditional men’s or women’s piece. Three models of different genders wore the same jeans with large cut-outs under the pockets, and the same paneled denim jacket with wide neck line for the spring 2019 show.

Many silhouettes carry over for spring 2020 but in mixed-media jeans sewn with red nylon and cargo pants, and sideless trousers paired with T-shirts and collared shirts crafted from vintage pieces. Broad shouldered shirts and tops and flared jeans are juxtaposed with body-hugging pieces, and they’re all worn by every body, showing it’s meant for everybody. “We’re just doing the things that we’re doing and doing the stuff with people we like,” Radboy said.

Where is the trust and support leading the brand? “Wholesale is growing rapidly, but not the biggest part of our business,” Radboy said. “We make money in different types of ways like direct-to-consumer and the projects that we do.

“Things are growing naturally and have customers discover us in a natural way and not a pop star demanding them to buy something. That’s the power of how the bag has been, you use it because it’s useful,” Clemens said.

“Things have been good, but I’m waiting for us to do a show and see sales right after the show. One thing we want to see in our Paris shift and what that’s going to mean for our future,” he said.

Clemens also has plans to keep his runway show on the road. Consider the Paris showing as the first stop of a world tour. With moving manufacturing to Italy, he said the fall 2020 show will also be held in Italy, but he did not confirm a city. “We’re Telfar Global and taking the collection on a tour,” he said. “Nothing belongs to one person; every city is getting a piece of the tour.