Tennis Lob for Stella and Adidas

The Adidas by Stella McCartney sport universe is expanding fast, and tennis is next on the agenda. 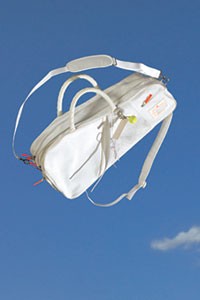 NEW YORK — The Adidas by Stella McCartney sport universe is expanding fast, and tennis is next on the agenda.

“There is not a great-looking, high-performance spin on tennis and it’s about time women look stylish on the court,” said McCartney, who last week held her spring runway show in Paris and has also been developing a line for H&M that will hit next month.

Tennis is part of the new spring collection for the cobranded line, which bowed at retail in February and has continued to sell above plan at virtually all its retail locations. Similar to the products for fitness, running and swim, the tennis looks blend performance-driven technology and fashion, with items such as a layered dress, pleated skirts, cropped jackets, tank tops and fitted polo shirts. Many have Adidas’ proprietary Climalite technology, as well as mesh and Lycra materials to keep wearers cool and dry. The color palette is similar to past seasons with hues such as dusty rose, gray and white and many items have special touches like a neon zipper pull or cutout back. There is also a selection of tennis accessories such as a white tennis racquet bag, terry cloth wristbands, a visor and footwear.

The tennis looks carry suggested retail prices ranging from about $70 for tennis shorts to $200 for the bag, and the company is looking to sell the line in tennis shops as well as its existing distribution of specialty chains and high-end department stores.

Other offerings for spring include a running singlet, woven pants for the gym and one-piece swimsuits with open backs, as well as a wider selection of footwear and accessories, and new colors like bright yellow and hot pink.

Although the line has expanded into Europe and Asia, distribution remains tight: It’s only sold in about 450 stores worldwide and 100 doors in the U.S., including Bloomingdale’s and the Adidas performance flagship in Manhattan. The initial spring collection was virtually sold out and fall is off to a strong start. Top-performing items include a padded jacket selling for $325 and a trail fleece for $300, a company spokeswoman said. Adidas executives don’t release sales information, but sources said the collection is projected to do $15 million in wholesale volume in its first year.

“Orders are increasing and we get new requests every day from retailers that want to carry the line,” McCartney said. “We are filling a gap in the marketplace.”