With fashion looming as a lightning rod in today's culture, Th(e) Influencer is out to spark the creativity of fashion marketers. 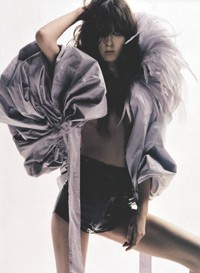 NEW YORK — “This is not about ‘fall is fuzzy,'” quipped Marc Balet, co-editor of the bookazine Th(e) Influencer.

Quite the opposite. A sense of darkness and anxiety pervades many of the images contained in the publication’s fall edition, including Glen Luchford’s photograph of a nude woman with gothic makeup and a python wrapped around the length of her body; Marilyn Minter’s photo of a woman’s feet, in strappy, bright turquoise wedges, splashing in muddy water, and a row of melancholy men, staring sullenly away from the camera in a Commes des Garçons shirt ad, shot by Collier Schorr.

With fashion looming as a lightning rod in today’s culture, Influencer founding editor Beatrice Dupire is out to spark the creativity of fashion marketers via images that illuminate influences in people’s 21st century lives — from drawings, paintings, sculpture and fine art photographs to fashion and other print ads. Two thousand copies of Th(e) Influencer are being published this month, a bump up from the few produced when Dupire initiated the project on a smaller scale in 2001 (“for one or two or three clients”). She was motivated to collect the images by her experience as a curator of “Yves Saint Laurent’s 40 Years of Creation,” an exhibition held here in 1999.

“Some people can truly get an inspiration from the artist to open some doors and make better access to the [consumer] markets,” Dupire said in an interview, accompanied by Balet in his 3,600-square-foot loft just north of SoHo, which serves as his combined living and working space. Rather than wrestling with the philosophical question of how much fine art can influence commerce, the creative duo is offering a fluid blend of the two.

The mixture’s proportions are variable — and are in the eye of the beholder. (Parentheses have been placed around the ‘e’ in Th(e) Influencer’s title to suggest its intention to act as an eye on culture, a symbol reminiscent of the eye-like logo of the CBS television network.)

A fundamental question for fashion marketers, Balet said, is “how can I translate the things I see out there into [something] that makes sense for me?” In the estimation of the Influencer duo, drawing from fine art is among the ways fashion marketers might do so — much as people express themselves via fashion itself.

The raft of things people are experiencing begin to take form for Th(e) Influencer in the traveling, observation and scavenging undertaken by Dupire and a small cadre of compatriots, among them George Pitts, photo editor at Life, and Roger Schmid, founder of the fragrance-centric consulting firm NoseAbout and former head of innovation at Symrise. (Symrise’s Dragoco unit was Th(e) Influencer’s first client. Estée Lauder and visual fashion consultant Decode Creative were also early customers.) From January through June, Dupire collected approximately 5,000 images, which she and Balet edited to roughly 2,000 for the biannual publication, which will be available at the end of July in the U.S., Europe and Asia from D.A.P./Distributed Art Publishers. The price per copy: $7,500.

The mode of collection was intuitive rather than methodical. Aesthetic themes and cultural sensibilities sprang from the experiences of Dupire and the images she subsequently uncovered; she did not look for fine art and advertising to reflect preconceived notions.

In her travels, Dupire has become sensitive to a sense of heaviness and anxiety in people’s lives, particularly in cities like New York, London, Berlin and Shanghai. “I think it is very urban — people not understanding or trusting each other,” Dupire related, chalking up those feelings to people’s insecurities about their environments, their economies and their politicians. As a result, many images in the fall 2006 Influencer, she said, convey “a mix of provocation, violence and inspiration, brought about, in part, by a clash of various cultures.”

Two themes — Venom and No Exit — are the most likely among the volume’s half-dozen visual trends to inspire fashion marketers, designers and models, Dupire believes. These are two of the three main themes in the bookazine’s first section, The Observatory, with Experiments being the third.

The images and cultural reference points in the Venom section, like Luchford’s gothic nude with a snake, Dupire said, reflect “a desire for domination, a way to express your power.” One way people might express such urges, she posited, is to own some luxury items. At the same time, Balet observed, “Having too much can have some malefic power.”

Not coincidentally, Malefic Nature is the first of four sub-themes in the Venom section, a sensibility marked by leisure taken to an extreme in a world where, Influencer essayist Cheryl Kaplan writes, “beauty and horror are once again companions.” These threads are woven through photographer Craig McDean’s spring-summer 2006 Anna Molinari ad, as well as Karl Lagerfeld’s Fendi ads for spring 2005, each of which portray women seemingly swallowed up by their adornments. Deep purples and reds appear in the Molinari and Fendi visuals — tones emblematic of a shift to harsh, jarring and intense hues, as opposed to peaceful, bucolic ones.

Those themes cropped up this month in John Galliano’s fall couture collection for Christian Dior in Paris, where the designer’s program notes cited Lucifer as one of his inspirations for the collection, which featured deep reds and purples, and a goddess dress that offsets a sleeveless right arm with an oversized appendage on the left.

Keywords associated with each of 16 sub-themes contained in The Observatory section map the symbols and messages the authors found most important in each of the sub-sections. The keywords connoting the portraits in Malefic Nature, for example, are snakes, orchids, insects, owls, skulls, fear, death and corruption — the latter three perceptible in the Molinari and Lagerfeld pieces.

Dark themes also inform No Exit, which considers how people in urban settings relate to their world. “Sometimes you can get trapped, have a sense of malaise,” Dupire said of feelings examined through the section’s works. “There’s loneliness, desolation, fear, violence.” The characters featured in many of the images in No Exit, Kaplan writes, “are caught up in doubt, loss and misery, while playing the card that by all rights should get them to the next better deal.”

However, Kaplan notes, “While other forms of photography focus on appearance, the photographers in No Exit focus on disappearance, on what’s not there and what no longer can be. They are documenting not only what’s missing, but what’s often never even showed up in the first place.”

That point of view is embodied in a slew of ad imagery in the upcoming Influencer. It includes Juergen Teller’s photograph, for Marc Jacobs, of a suited-up, melancholy pianist clinging to a slick grand piano, in a deteriorating room marked with war graffiti; David Sims’ shots, for Christian Dior, of moody men, some in shadows, looking disconnected from the world around them, and Mert Alas and Marcus Piggot’s portrait, for Hugo Boss, of a man and woman with their backs against a rooftop wall, staring anxiously off-camera, as well as Schorr’s shirt ad for Commes des Garçons.

One of five No Exit sub-themes, Urban Poetry, characterizes images such as those found in the ads for Jacobs, Dior and Commes des Garçons, a concept defined by keywords such as rock ‘n’ roll, brooding, rebels, melancholy, Hedi Slimane and Robert Mapplethorpe, while the No Exit offshoot Lost In Transition, associated with the Hugo Boss visual, is described by keywords like nihilism, destruction, Catch-22, hopeless, Gus van Sant, Larry Clark and Kurt Cobain.

Despite their presence in fashion advertising, Balet insisted that such images, like the fine art reproduced in Th(e) Influencer, are not simply a statement about fashion. “They are a visual cultural statement,” he maintained. “Apart from their use as a tool, they have a certain sensibility — some people will get it and some people won’t.” In that way, Th(e) Influencer reminds Balet of Andy Warhol’s Interview, where Balet was creative director in the late Seventies. “Interview was like smoke signals that went out and certain people could read them,” he recalled. “It was not usual, not the norm.”

Each of Th(e) Influencer’s six main themes are introduced in an essay written by Kaplan, an artwork illustrating the theme’s reference point in contemporary culture and a second piece suggesting a historic influence on the theme. For example, the cultural reference point for Venom is Marc Quinn’s 2003 color photograph, “The Overwhelming World of Desire,” which places a grotesquely tall flowering plant with deep red petals towering over a field surrounded by trees that are no higher than the plant itself. The historic influence is an unnamed 1977 color photo by Guy Bourdin portraying a nude woman — representing both vulnerability and wickedness — lounging on her back, atop a tall stack of oversized red, purple, black and brown cushions.

Th(e) Influencer’s first section, Observatory, focuses on the work of established artists and photographers, many of them with links to Dupire, in her role as curator of The International Festival of Fashion Photography, which she founded, and to Balet, whose work as a creative director winds back to fashion advertising in the Eighties and, before that, to Interview. Dupire has curated the work of photographers such as Juergen Teller, Helmut Newton, Steven Meisel, Peter Lindbergh, Herb Ritts and Mario Sorrenti, while Balet’s advertising clients have included Giorgio Armani, Yves Saint Laurent, Barneys New York, Express and Ben Sherman. Kaplan, who is an artist as well as a writer, was asked to join by Balet, with whom she had worked when he was creative director at Connoisseur magazine.

The publication’s second section, Compass, embraces works the editors considered more experimental, which are grouped into three descriptive themes: Primitive (beauty in its raw form), Seek The Real (personal authenticity in a world without borders) and Natural World (the lightness of being yourself).

The bookazine itself is packaged in an unusual manner, bound on the spine and across soft covers with visible stitching, and with the folio edges of the publication’s 474 pages still exposed on the spine, giving the appearance of a book-magazine hybrid.

For her part, Dupire envisions Th(e) Influencer as an antidote to the sameness that’s been setting into visual imagery, including fashion ads — a homogeneity stemming from the globalization of pop culture and the unifying force of technology. “Whether you are living in New York, London or Paris, the same sources are serving as visual reference points,” Dupire said. “The images you see are identical. It’s very hard to find new images for advertising.”

The bookazine also attempts to frame images of seminal cultural figures as a contrarian take on contemporary celebrity culture. “These people are essential — they are not only about money and power, music and lifestyle,” Dupire said of figures such as Eldridge and Kathleen Cleaver, Miles Davis, Nina Simone, Marvin Gaye and Muhammad Ali, who are depicted in the No Exit section dubbed Heroes.

Too, Dupire’s notion of heroes as essential beings speaks to changes that she is anticipating in fashion advertising. “In fashion we will get closer to the truth, to deliver a message that can be poetical or about beauty — but coming from the inside [of someone]. The essence. It’s not about being sophisticated or perfect.”