Thanks for the Memories

2001 Motorola Hard Candy party: “I’m friends with Michelle and looking back, we were like, ‘What were we thinking? You’re not J.Lo. Step... 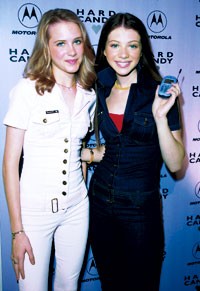 2001 Motorola Hard Candy party: “I’m friends with Michelle and looking back, we were like, ‘What were we thinking? You’re not J.Lo. Step away from the catsuit!’”

2003 Los Angeles premiere of “Thirteen”: “A friend said he was going to wear a blue velvet jacket and red Converses so I was like, ‘Alright, I’ll wear the Björk-ish funky dress.’ He did not wear that, but I’m still glad that I did that because I normally wouldn’t be that brave.”

2003 American Cinemateque Awards: “Ah, Zac Posen! It reminded me of the movie ‘Sabrina.’ It’s really simple, classic and dressy. I really liked that one.”

2004 SAG Awards: “It’s funny, Jessica [Paster] pulled that off the rack and I thought she was kidding because all I saw was feathers. But I put it on and completely fell in love with it. It reminded me of Grace Kelly.”

2004 MTV Movie Awards: “I wanted to wear this cool black vintage-y dress, and somebody told me that I’d blend into the background. So I wore the blue one, and everybody hated it. I was like, ‘I frickin’ told you guys!’”

2005 Critics’ Choice Awards: “That one was my favorite. I loved everything — my hair, the dress. It was different from anything I’ve ever worn.”