“I wanted you to see how well I’ve recovered from my heart attack,” said Reagan jokingly at his first party since his campaign to unseat Carter as president. 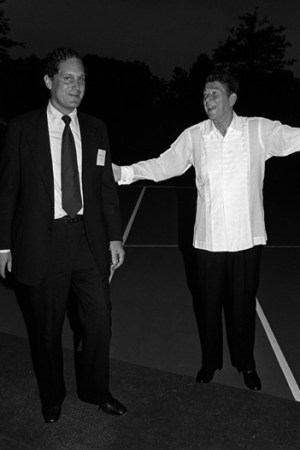 “I wanted you to see how well I’ve recovered from my heart attack,” said Ronald Reagan jokingly at his first at-home party since kicking off his campaign to unseat Jimmy Carter as president. WWD was there in September 1980 alongside aristocrats like Ronald Lauder, son of Joseph and Estée Lauder, David Rockefeller and Joe Coors, president of the brewing company. The gathering of top GOP fund-raisers was thrown to celebrate a slew of then-presumptuous “Prelude to Victory” dinners planned for later in the month that would feature closed-circuit television entertainment headed by Dean Martin and Frank Sinatra.

At times the mood was light, with Lauder schmoozing Rockefeller, saying, “I just bought a Picasso painting you once owned,” or Reagan himself clarifying his equestrian preferences (he rode English saddle, incidentally). But there was some serious politicking to be done. While a three-piece band played “Put on a Happy Face,” guests were all too eager to give Reagan a bit of free advice. “We’re fortunate it’s not October,” conceded Senator Paul Laxalt of the campaign’s rocky start. “Everyone here is telling him to go on the offensive,” Ralph Abercrombie told WWD’s reporter. And Henry Kissinger gloated that he’d been advising Reagan “all night long.”

With all of that considered, one can’t help but wonder whose advice that night might have changed the course of history.