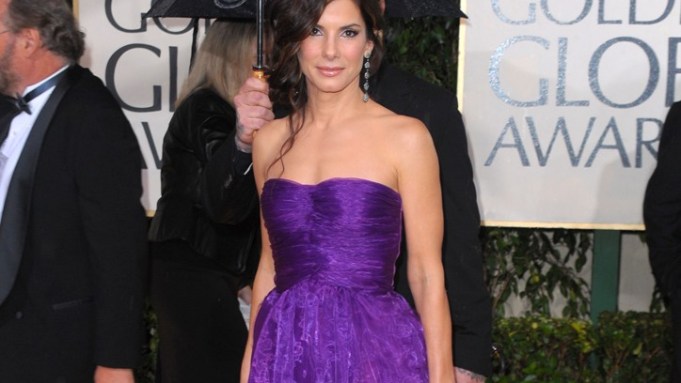 So much for sunny California. The 67th Annual Golden Globes saw a torrential downpour on Sunday, sending stars running for cover and publicists unfurling umbrellas as they tried to salvage the red carpet photo opportunities. (Although rain was predicted for over a week, producers decided not to tent the hundred foot long red carpet at the Beverly Hilton hotel.)

Even George Clooney, who was the last to arrive, took the weather in stride. “What is this day about? Pure rain. Just look at the bottom of her dress,” he said, pointing to the soaking hem of girlfriend Elisabetta Canalis’ pink jersey Roberto Cavalli gown.

Mariah Carey stayed dry by entering the red carpet at its midway point from inside of the hotel, and Sandra Bullock credited pure luck for her choice of a deep purple Bottega Veneta gown made from Japanese chiffon. “My dress is actually waterproof, but it certainly wasn’t intentional. I chose it because it was beautiful,” she said.

But for every sleek, dark number out there, there were twice as many light colored chiffon and silk gowns that will never be returned in the same shape as when they went out.

Lucky for the men. “I just ran right through the rain,” said Chace Crawford in a traditional black tux. “I’m just telling everyone it’s my fault since it’s my first time here.”