The Academy of Art Finishes With a Flourish 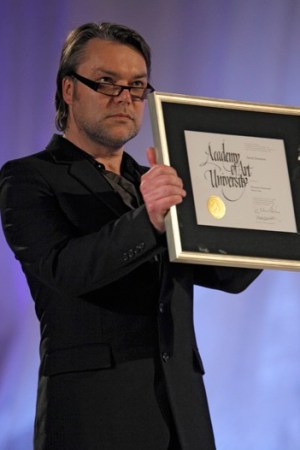 Students graduating last week from the School of Fashion at the Academy of Art University in San Francisco might say their B.F.A.’s and M.F.A.’s are proof of surviving a fashion boot camp rooted in London’s Central Saint Martins College of Art & Design. Two Saint Martins graduates, Gladys Perint Palmer and Simon Ungless, lead the fashion school, sticking to the Saint Martins way of requiring fashion design students to do it all, from sketching and pattern making to fabric design and sewing. After that, they can break the rules.

“Some students want to start without a solid concept,” said Ungless, before the graduation fashion show. “They want to shock you, but they don’t get very far in the design process.” This spring the school awarded 54 B.F.A.’s and 26 M.F.A.’s.

After the presentation, the fashion school gave honorary doctorates of Humane Letters to British fashion illustrator David Downton and Prosper and Martine Assouline of Assouline Publishing in Paris and New York. Earlier in the day, the Assoulines told students they don’t expect their high-end fashion and style books to ever be issued as e-books. However, the company is turning its Web site into a separate Internet magazine as a brand-builder.

“The changes with the Internet bring out so many possibilities, but we will never say goodbye to books,” said Martine Assouline during a fashion media panel discussion.