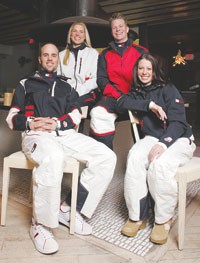 NEW YORK — You might think that the last thing on an aerial skier’s mind when he’s soaring and somersaulting 60 feet in the air — sans safety net — is how his pants look. Think again. The straightness of a pant leg or the color of a knee patch could mean the difference between Olympic gold and, well, fifth place in today’s world of microdecimal scoring. The importance of such details is not lost on Tommy Hilfiger, an advanced skier himself, though admittedly not up to Olympic standards. So as sponsor of the U.S. freestyle ski team since 2002, he has spent the past few years perfecting the competition uniforms the 14 members will wear during the upcoming Olympics in Turin, Italy.

“We’re very proud to work with this team,” says the designer, who, ironically, is recovering from a ski injury he sustained while navigating moguls last month at Stratton, Vt. He’s a big fan of “bumps and jumps,” in snowy jargon. And it doesn’t hurt that for two weeks during the Games, the color-blocked red, white and blue Hilfiger logo will be the only symbol sharing space with the Olympic rings and the American flag on the freestylers’ competition and casual uniforms. “It’s always great to get that type of exposure because people all over the world will be watching,” Hilfiger says.

By all accounts, the athletes are more than pleased with their sporty togs. Eric Bergoust, a veteran of three Olympics with a gold medal for his aerial stunts at 1998’s Nagano Games, isn’t one to skimp on the finer points of his light, zipped jacket and loose pants — which can be worn in any combination of red, white and blue. “Like divers, we get judged on form,” he says of aerialists, who launch off a ramp 60 feet in the air while simultaneously flipping and twisting, keeping their bodies in the straightest possible line. “If a uniform is too tight, it reveals even the slightest form breaks. But if it’s baggy, you still look straight even if your knees are bent just a little.” For an even tighter line, he had hooks sewn into the hems of his pants that attach to his ski boots.

At 36, Bergoust is the “old man” of the team, but he’s no athletic geezer — his favorite stunt is a “full, double-full, full,” which is a series of three backflips and four twists. Outside of the U.S. team, he’s been personally sponsored by Hilfiger since 1999. “I know that the detail and quality are there with Tommy,” the skier says. “I trust his design.”

Then there’s the psychological argument that looking good boosts confidence. “I jump better when I know that I look great,” says Emily Cook, 26, Bergoust’s teammate and fellow aerialist. She appreciates the fashion designer approach, that a visual trick can make a girl look thinner, smaller, fitter and — in Cook’s petite 5-foot, 3-inch, XXXS-sized case — longer. “If the judges see you with a long, straight, graceful body line, they’ll score you higher.” For this, her first Olympics (she was sidelined after shattering both feet in a jump two weeks before the last Games), she plans to wear navy blue top-to-toe.

Likewise, mogul skiers also use their gear to both emphasize and mask certain body parts, namely their knees. Hilfiger has sewn contrasting-colored knee patches into the skier’s pants so that judges can easily track the athletes’ performances as they barrel down the slope at 35 m.p.h., angling around 5-foot-plus high moguls and throwing in a few aerials to boot. “Knee patches show the angles of our knees as we make turns,” says 23-year-old Nate Roberts. “If another team doesn’t have anything on their knees, our scores can be higher because the judges can see the definition of our turns.” And, the baggier fit helps hide tiny errors, adds Roberts’ mogul teammate and girlfriend, Jillian Vogtli, 32, who’s getting ready for her second Olympics. “It’s an advantage for us to have bigger clothing than the other disciplines,” she says, “because when we are bent, our knees are going to be apart but we don’t want it to look that way.”

While they’ve left the creative aspects up to Hilfiger, the athletes have definitely voiced their opinions on the technical details. For instance, says Roberts, two years ago the pants were tapered ever so slightly but “with a ski boot, that’s not ideal. So there was a little input and the next year, they were fantastic.”

The teammates maintain that they’re also happy that a designer who flies Old Glory is creating their uniforms. “It’s important that as the American ski team, our uniforms are being designed by an American company,” Bergoust says. For the last winter Olympics in 2002 in Salt Lake City, the freestyle team’s uniforms came courtesy of the Japanese sport label Phenix, which had sponsored the Canadian freestyle team for the previous Games in Nagano. “With the other sponsors, we weren’t always sticking to red, white and blue colors — and they’re our colors,” adds Vogtli. “I mean, we’ve been in orange and green in the past.”

In all, Hilfiger will outfit the freestyle men and women — the final team roster is announced Jan. 25 — for aerial and mogul disciplines. Uniforms for the separate nordic and cross country teams will be provided by Swix, alpine by Spyder and snowboarding by Burton. Hilfiger’s sponsorship marks the first time a fashion designer is supplying the actual performance gear for American Olympic skiers, as opposed to just the uniforms they wear when not competing, which he is also supplying.

For their noncompetition wardrobe, Hilfiger has given the skiers fleece jackets, windbreakers, sweaters, turtlenecks and jackets, all made from Coldstop, a fabric he developed in-house for the competition gear. “We wanted to create something that’s pliable, lightweight, breathable, waterproof and that has a natural heating and cooling system,” he says. Variations of the casual looks, branded with the ski team’s logo, will be available to fans at select Macy’s stores, retailing for $25 for a T-shirt to $265 for a down parka.

The oversized cream down parka, the athletes’ favorite off-slope look, also serves an Olympic purpose. “If you’re cold when you jump, you’re going to get hurt,” says Cook, who slips into the coat when she has to wait on the mountain sometimes up to an hour between jumps. “It’s freezing in places like China and Canada.” And Turin probably won’t be terribly balmy.

As for the designer, Hilfiger can’t wait for the Games to begin. At press time, he wasn’t sure if he was going to make the trip to Italy, but was planning to give his TiVo a serious workout. And while he likes all the skiing events, his favorites are obviously freestyle. “There’s more action. It’s theatrical and the people are young and irreverent,” he says of the relatively newer discipline. “There’s a cool factor to it.” And of course, in sports and fashion, that’s golden.