FLORENCE — In order to move ahead, Salvatore Ferragamo is turning back to its beginnings.

The fall season marks a significant step for the Florence-based company, which is injecting its accessories with a new edge and refocusing on its... 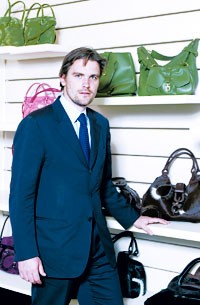 FLORENCE — In order to move ahead, Salvatore Ferragamo is turning back to its beginnings.

The fall season marks a significant step for the Florence-based company, which is injecting its accessories with a new edge and refocusing on its historical core business. Ferragamo has added 30 designers, who are drawing inspiration from the maison’s rich archives, rejuvenating Salvatore Ferragamo’s original ideas. Also, beginning with the fall collection, James Ferragamo, grandson of founder Salvatore and son of chief executive officer Ferruccio, is now in charge of the handbag division.

The company is highlighting its new course by holding daylong presentations of accessories in Milan today and Friday — a first for the firm — in addition to its fashion show on Saturday. That day, on side panels off the runway, Ferragamo will project a kaleidoscope of photos of shoes by young British artist Joe Lacey.

“Our customers are buying a piece of history and we are re-creating the connection between my grandfather and the company today,” said James Ferragamo in an interview at the company’s palazzo on Via Tornabuoni.

The late Salvatore Ferragamo’s creativity is legendary — he trademarked more than 400 designs and the Ferragamo museum in Florence showcases more than 10,000 shoes. Many of the footwear designs for next season are directly re-created from original Ferragamo models, such as the platform shoe or the jewel heel, and James Ferragamo is making a point of infusing the same spirit into the handbags, aiming at one design philosophy for both divisions and maintaining the handmade craftsmanship and quality.

Ferragamo said his team has deconstructed the handbags, making them lighter, and has focused on luxurious, unusual hides developed from ostrich feet, kangaroos, antelope or gazelles, in addition to astrakhan, python, rabbit, pony hair and calf with a wild boar print. There is also a selection of bags made of knitted wool in rich chocolate brown or ivory.

Ferragamo said that, while the iconic hook remains a staple, the company is cutting down on metallic and shiny details. “The Nineties were more dressy and businesslike, but customers today request more casual, soft bags with less shine,” he said.

Accordingly, many of the new bags feature a leather hook crafted to resemble wood. One of the brand’s bestsellers is the Gancio line, which features the hook closure on a calf-leather strip running the upper length of the bag.

“We want our bags to be more recognizable with the Gancio line,” said Ferragamo, noting that handbags already showed a 20 percent increase in sales compared with last year. Leather bags retail from $370 to $1,490, while fabric bags retail from $55 to $750.

For both shoes and bags, there is a return to color — also one of Salvatore’s priorities. The palette ranges from rich Tuscan green to eggplant purple.

“We are returning to the spirit of Salvatore Ferragamo, who always created innovative, quality products and made an enormous effort to find the right fit,” said Hervé Martin, product general manager, who joined the company in the summer of 2003. According to Martin, customers have not changed and still want to find products that “make them feel more beautiful,” without sacrificing comfort, quality and creativity.

That said, Martin did not downplay the importance of ready-to-wear, which Graeme Black oversees. Clothes reflect the brand and help present a label’s identity in its entirety, said Martin.

“Accessories are built on ready-to-wear and help strengthen the communication,” he said.