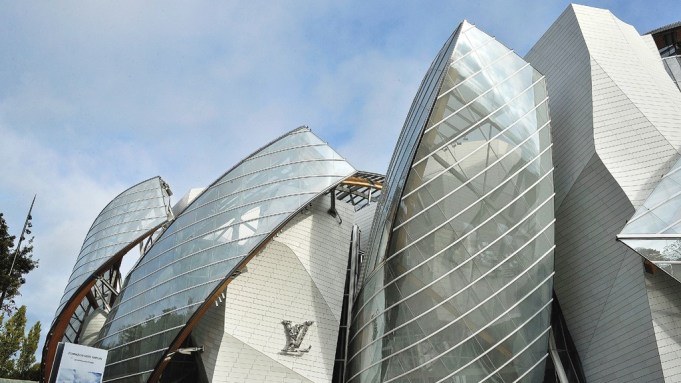 PARIS — The convergence of fashion and art — plus a dash of political intrigue — reached a new apex in Paris on Monday night with the official inauguration of the Louis Vuitton Foundation.

Luxury titan Bernard Arnault beamed proudly as he and French President François Hollande pushed a button to light up the new Frank Gehry-designed structure, which glowed like some futuristic sailing ship amidst the parkland in which it is set.

It was a moment to savor for Arnault, a personal project of art sponsorship, and a gift to France that he named after his biggest and most profitable brand.

“Louis Vuitton is the brand in our group that probably has the strongest links with artists — and for the longest time,” the chairman and chief executive officer of LVMH Moët Hennessy Louis Vuitton told WWD in an interview on the eve of the opening event, which was peopled by fashion designers, Hollywood actresses, politicians, artists and LVMH brass.

While known as one of Europe’s most formidable entrepreneurs, Arnault waved off business talk to delve into one of his favorite subjects — creativity — the fuel behind the $40 billion luxury empire he constructed in roughly one generation.

“Since I arrived at LVMH, I thought it would be a good idea to pay homage to the creative realms that have brought economic success to our business, Vuitton in particular,” he said.

Monday’s christening marked the summit of Arnault’s decade-long quest to construct an art museum in Paris, and in a Gehry building that already has won praise from the world’s architectural critics.

It also illustrates how fashion and luxury goods — one of France’s banner exports amid general economic gloom — have the power to attract heads of state, even Hollande, whose Socialist party and unpopular administration enjoy an uneasy rapport with wealth, telegraphed by the 75 percent income tax that was among his government’s first proposals — and that has impacted Arnault, the richest man in France.

RELATED STORY: Behind the Vision — Q&A With Bernard Arnault >>

On Monday, Hollande took a private tour of the exhibitions, shook hands with Marisa Berenson and Pierre Bergé, and joined Arnault and Gehry onstage for speeches. Also present from politics was Paris mayor Anne Hidalgo and Fleur Pellerin, France’s minister of culture and communications, dressed in Dior.

Switching from his rustic, rudimentary French to English, Gehry spoke of Arnault’s intuitive approach to the project. “I found him to be quite artistic in the way he thinks,” the architect said.

While poking fun at his government’s challenges, Hollande lauded the foundation as a “crystal palace of culture” and a symbol of progress that would become — like the Eiffel Tower and the I.M. Pei pyramid at the Louvre — an additional attraction in the most visited city in the world.

Opening to the public on Oct. 27 with an exhibition devoted to Gehry’s oeuvre and works by Gerhard Richter, Christian Boltanski and Bertrand Lavier also on display, the foundation is something of a coup for Arnault, who surmounted considerable opposition from environmentalists and neighborhood groups to construct the 118,400-square-foot structure in the Bois de Boulogne, a vast park on the western edge of Paris.

His luxury rival and fellow art collector François Pinault, whose family controls Gucci parent Kering, abandoned plans to build a namesake foundation on the Île Seguin here in 2005 and decamped to Venice’s Palazzo Grassi. That opening upped the ante in the tit-for-tat game of one-upmanship between two prominent French entrepreneurs.

A host of blue-chip artists turned out for Monday’s VIP preview, including Jeff Koons, Anish Kapoor and Sophie Calle. The evening culminated with a dinner for 300 in the building’s auditorium capped off with a 2011 Château d’Yquem, one of Arnault’s many holdings.

What draws artists to fashion?

“Fashion is very attractive,” Lagerfeld said in his winking fashion. “Andy Warhol was the first to understand that.”

They yield “something mysterious in the end,” he said. “Yes, we make objects, but that’s not our real purpose. What we want is to create a mythological event. Great fashion is also mythological. It’s not really about clothes, it’s what they represent.”

Swedish actress Noomi Rapace, dressed in Givenchy and escorted into the party by Tisci, lamented that Hollywood can at times be too reverential. “Fashion is brave. It looks at the future,” she said.

Michelle Williams, who fronts leather goods campaigns for Vuitton and took time off from “Cabaret” on Broadway to fly to Paris, mused that art brings another dimension to fashion: “It adds a sense of permanence.”

While Arnault stressed the foundation’s primary mission and focus would be contemporary art and its links to earlier art movements, it has joined the Paris cultural fray with a cool factor and immediate buzz, exemplified by Monday’s glitzy guest list and telegraphed by its inaugural performance — a series of concerts by German electronic music pioneers Kraftwerk, darlings of the fashion crowd.

“The culture of France is unique because it’s a culture that has a high priority on the arts, more than any other place in the world in our time since Greece. So as a practicing artist, if you will, this is home ground,” Gehry told WWD. “They love us, so music, literature, art continues to be the center.”

The foundation’s opening coincides with Vuitton’s 160th anniversary and with the arrival of its latest arty collaboration, with monogram handbags dreamed up by the likes of Cindy Sherman, Lagerfeld, Rei Kawakubo, Christian Louboutin, Marc Newson and Gehry arriving in select Vuitton stores this month.

Arnault noted a limited-edition handbag by the Canadian architect, an off-kilter design rendered in Vuitton’s iconic brown and gold canvas, would be sold at the museum.

“I disagree,” Arnault retorted when read the musing. “When we buy works of art, we buy them for keeps. Maybe some approach it differently. I think one of the problems in the art world today is precisely the fact that there is more and more speculation on some artists, so suddenly you have very young artists immediately selling at prices that seem unreasonable. I think it’s a sign of a malaise.”

The foundation, meanwhile, is a symbol of the values he and Vuitton hold dear, creativity, quality and an entrepreneurial spirit. (See question-and-answer with Arnault, page 7.)

Arnault noted Gehry’s unworldly structure, hulking yet lyrical, required a host of engineering marvels and aerospace technologies to realize its sweeping panels of glass, which shroud an intricate composition of stacked boxes, designed expressly to be functional galleries.

The foundation arrives at turbulent times for the luxury sector, faced with morose economies and geopolitical upheavals, including an anticorruption crackdown in China that has dampened demand, and mounting fears of wider Ebola outbreaks.

LVMH recently reported sales in the third quarter gained 5.7 percent to 7.39 billion euros, or $9.8 billion, only 4 percent stripping out the impact of currency and acquisitions.

Yet in a meeting room at LVMH’s headquarters on Avenue Montaigne, the walls lined with works by Pablo Picasso, Warhol and others, Arnault sounded sanguine, stressing that he prefers the thrill and challenge of uncertainty to headier, devil-may-care times.

“I’ve always said that even in a quiet environment, you should question yourself. And react when everything is quiet as if it is not. That’s the spirit of the group. We try to see everything with that perspective,” he said, mentioning the late Apple cofounder Steve Jobs, another entrepreneur that made his mark on the business world. “I knew him and we shared the same philosophy: To be alert to what can go wrong even in very good times. I think for creative people, it’s the same thing. You should not sleep, even when the weather is good.”

Michael Burke, Vuitton’s chairman and ceo, said affiliations with artists shake up a heritage brand and keep it fresh. He flashed images on his smartphone of sketches by artist Camille Clees Brothier commissioned by Gaston Vuitton, part of the third generation, for a Vuitton perfume in the Twenties.

Artists and architects, he added, “work on eternity. We’re somewhere midway between of-the-moment and eternity.”

Asked to account for the popularity of Vuitton’s collaborations with artists, like its 2003 blockbuster with Japanese artist Takashi Murakami, he said, “an artist will respect the icon, yet be transgressive. It’s about dancing with an icon.…We had no idea it would do the kind of business it did. It was of the moment.”

Nicolas Ghesquière, the Vuitton brand’s new artistic director of women’s collections, collaborated with Dominique Gonzalez-Foerster and Cindy Sherman during his Balenciaga years, valuing the dialogue artists bring to fashion. “The perspective they have on things brings us to another dimension. They change our point of view on things, and what could be better for fashion?” he asked. “Art has taken on so many forms.”

Architecture can be similarly inspiring, and Ghesquière said he was pleased to stage his spring show at the foundation earlier this month. “I see it like a ship. Something that could sail away, or fly off like a spaceship,” he said.

The final building — less than half the size of the titanium-clad Guggenheim in Bilbao that rocketed the Spanish city’s global profile, along with Gehry’s — was built at a cost sources pegged at north of 100 million euros, or $128 million at current exchange.

The foundation is considered the most important new art institution to arrive in Paris since 2006, when the Quai Branly Museum of indigenous art and civilizations opened in a curving Jean Nouvel building near the Eiffel Tower. It is also Arnault’s biggest architectural pet project since 1999, when he christened the 23-story LVMH Tower in New York by French architect Christian de Portzamparc.

LVMH has a 55-year lease for the site in Bois de Boulogne, but the landmark building is effectively a “gift” to the city of Paris.

The project was unveiled in 2006, and was originally slated to open around 2010, but was delayed due to regulatory hurdles and attempts by neighborhood and conservation associations to block its construction.

On Monday, the only pressing debate was whether the building looked better empty or full.

“I love it empty,” said Lagerfeld. “It’s a beautiful piece of sculpture.”

Gehry had a different idea: “I can’t wait to see it filled with art and all kinds of people.”